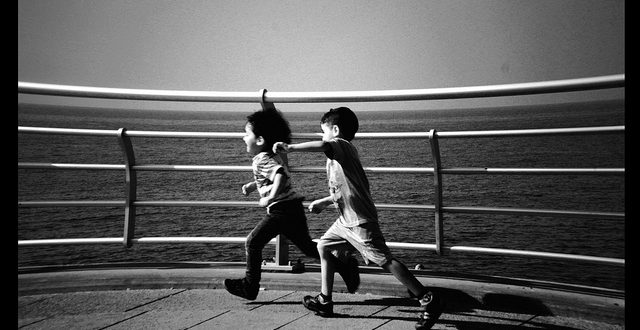 Here’s how to raise a child to be sympathetic

Parents and teachers might often wonder how to teach children caring toward others – more so when the world feels full of disagreement, conflict, and aggression.

As development psychologists, we know that children start to pay attention to the emotions of others from an early age. They actively take into account others’ emotions when making decisions about how to respond to them.

Does this mean that children feel sympathy for others from an early age? And is there a way in which parents can teach their children to be sympathetic?

A feeling of concern for another person, or sympathy, is based on a comprehension of the unfortunate situation and emotional state of another. It often accompanies feelings of pity for the distressed other.

Sympathy is different from empathy, which is more of an “emotional contagion.” If you feel like crying when you see someone else cry, you are experiencing empathy. You might even be overwhelmed by that person’s distress.

And unlike empathy, sympathy involves some distance. So, rather than being overwhelmed, feelings of sympathy might allow individuals to engage in prosocial behaviors, such as helping or sharing.

We start to show concern for others from very early on. For example, babies show basic signs of concern for others in their distressed responses to another infant’s cry, although in the case of babies, it might also be possible that they do not fully understand the self as a separate entity from others. So, their cry might simply be a case of emotional contagion.

Either way, these are early forms of how we show concern. Later in our lives, these advance into more sophisticated sympathy experiences. Rather than just crying for the other crying baby, children begin to think about ways to alleviate the baby’s distress.

This sympathetic response becomes possible because they start to incorporate cognitive understanding of the situation the other person is in. Sympathy goes beyond mere feelings of sadness for others’ distress. Rather, it guides our actions.

How do children at different ages engage differently in prosocial behaviors based on their sympathy?

To understand, we conducted a study to see how children shared. In our study, 160 four- and eight-year-old children received six equally attractive stickers. They were then given an opportunity to share any number of those stickers with a hypothetical child in a picture.

And the non-needy or neutral recipient as,

“This girl/boy is four/ eight years old, just like you.”

The answer to this question can be found in children’s growing abilities to put themselves in others’ shoes. Besides feeling concern for others, being able to comprehend the circumstances of others can enhance helping or sharing behaviors that are sensitive toward the condition of others.

For example, as our study demonstrated, older children shared more stickers with a peer who looked sad and had fewer toys even by giving up their own. This is different from simply sharing equal numbers of stickers with peers regardless of each one’s personal circumstance.

For example, a child who wants to play baseball would understand that his friend has a different desire – perhaps to play football. Or that another friend who is smiling in front of his parents is, in fact, hiding his disappointment because he did not get the birthday gift he really wanted.

In this regard, a recent review study that summarized the findings of 76 studies conducted during the last four decades from 12 different countries came up with the following findings:

The study looked at a total of 6,432 children aged between two and 12 years to find out how children’s perspective-taking abilities and prosocial behavior were related to each other. Results revealed that children with higher ability to take another person’s point of view showed more prosocial behaviors, such as comforting, helping and sharing.

Furthermore, when they compared preschool-aged children between two and five years of age versus children aged six and above, they found that this relationship became stronger as children got older.

As children are increasingly able to use contextual information they become more selective about when and how to help others. That is what our study showed as well: Eight-year-old children take into account the recipient information and make more selective sharing decisions guided by their sympathy.

The question is, could we encourage children to become sympathetic toward others? And could children learn the best way to help keeping in mind the unique circumstances of others?

The ability to feel concern for others is one of the key characteristics that make us human. Sympathy binds individuals together and increases cooperation among the members of the society. This has been observed in developmental research.
For example, in a long-term study conducted with 175 children, we found that when children showed high levels of sympathy at age seven, they were better accepted by peers and shared more with others up to age nine.

So, one of the things that we can do to facilitate sympathy in young children according to developmental research is to use what is called inductive reasoning. Inductive reasoning implies that parents and teachers emphasize the consequences of a child’s behavior during a social interaction. For example, when a child grabs a toy from his friend, the caregiver could ask the child,

“How would you feel if your friend took away a toy from you?”

This can encourage children to reflect on how their own actions may affect others’ thoughts and feelings. This can facilitate sympathy.

Researcher Brad Farrant, who, along with his colleagues, studied the relationship between parenting and children’s helping and caring behaviors, came up with similar findings.

Farrant studied 72 children between ages four and six. The study found that children showed more actions of helping and caring when mothers encouraged their children to see things from another child’s perspective. For example, if a child was “picked on” by another child, mothers who encouraged perspective-taking would guide their child to try and work out why the other child was picking on the child.

Telling a child he should help and share with others could be one way of teaching him how to be a good member of a society. However, thoughtfully engaging in conversations with the child about others’ needs, feelings, and desires could go one step further – it could help children develop sympathy.

Previous Viewpoints: The role of patriotism from your faith perspective
Next Many Haitian orphanages run by child traffickers, says J.K. Rowling’s charity