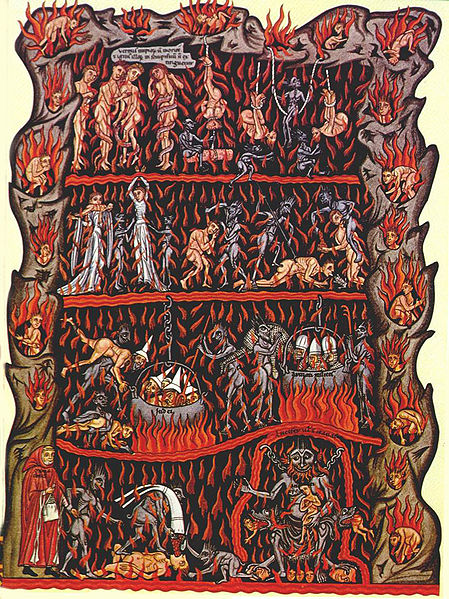 Hell and the death penalty

Recently, there has been some interesting discussion on the death penalty and whether or not it should be abolished. The question seems to turn on the moral nature of such a sentence. For instance, is the death penalty just? To my surprise, the majority of Christians weighing in on the matter favor the abolishment of the death penalty for various practical and moral reasons. What is interesting is that the moral reservations, contrary to first appearances, are not based on the Bible, but what I would call a modern moral perspective. If one goes by the Bible, then capital punishment is found not only to have been a cultural norm, but divinely mandated. We aren't even talking about the relatively humane executions practiced today, but rather horrific executions such as death by stoning.

Today, death is largely reserved as a penalty for only the most insidious crimes such as murder, torture, brutal rape, etc.  Christians who still find this to be morally contestable find themselves in a dilemma. Curiously, the Bible depicts God as not only in favor of capital punishment, but even applies it with great liberality. For instance, in Genesis 6 God executes all but eight human beings.  In Exodus 22, so called “witches” are sentenced to death.  In Deuteronomy 17, those who don't listen to the priest or judge are sentenced to death.  Leviticus 20 declares homosexuality a capital crime.  Even adultery, fornication and working on the Sabbath are considered capital offenses in the Bible. These are just a few examples.

Now, before any sort of defense is mounted on account of these being in the Old Testament, the New Testament is not free of such occurrences. Consider that Ananias and Sapphira were sentenced to death for merely lying and being greedy. So, on what basis do Christians reject capital punishment today, yet defend the bible on these matters? I don't know. Nevertheless, it seems that these Christians believe we have morally outgrown prescribing death as a punishment and so disagree with the Bible in this regard.

This leads to the next point.  In terms of punishment, there is nothing more grotesque, harsh, immoral and unjust than the notion of Hell, a place of eternal punishment.  Indeed, such a concept is hardly conceivable by humans.  What could possibly be the purpose of such a thing? As I was reading some of the comments concerning the death penalty I came across the following statement:

“So in the case of the death penalty Christian response would be to work to restore the devastated lives as best as can be, including the person who perpetrated the crime. That is true justice, when life is restored and relationships mended.”

Now justice is a very deep and difficult notion to rigorously pin down and there are various theories concerning its nature. The above quote emphasizes the rehabilitative/restorative aspect or approach to justice and to a large extent I think it is accurate and true, if only incomplete. But given this, there is a conflict with also believing in Hell, since Hell, by its very nature does not allow for relational mending, rehabilitation or restoration. One is eternally separated relationally from God and eternally punished so that even if the offender changes his or her mind (i.e. is rehabilitated) it is to no avail.

Furthermore, the punishment of Hell is infinitely disproportionate to the “crimes” that supposedly merit it. I dare say, no one deserves never ending punishment, not even Hitler. In short, the idea of eternal punishment fails on every account of what justice is all about. Its only purpose could be purely retributive in nature inflated to vindictiveness. So, if Christians can come to the conclusion that capital punishment is actually immoral (or at least sub-par), then when will they also come to the even more necessary conclusion that the idea of Hell should be discarded as the most morally bankrupt, illogical and empty form of justice?

Epictetus said, Content yourself with being a lover of wisdom, a seeker of the truth. One could say this is the very purpose of Ryan Downie’s life. What drives him, he said, is knowledge and understanding, an insatiable desire to learn.

Previous Church to host spiritual recovery class
Next One in six voters still think Obama’s a Muslim: Why?