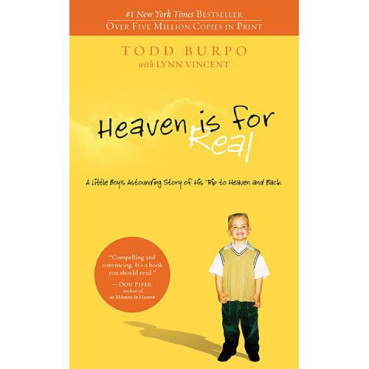 ‘Heaven Is for Real’ — and for everyone in new film

(RNS) Heaven is not only “for real,” it’s pretty much for everyone in the new movie based on the near-death experience visions of a precocious preschooler.

“Heaven Is for Real” book cover, photo courtesy of Amazon.com.

The original book, “Heaven Is for Real,” was a 2010 sales sensation. Nebraska pastor Todd Burpo detailed his 4-year-old son Colton’s visions of a blue-eyed Jesus in a rainbow-bright afterlife populated with everyone his family ever loved.

The film’s co-producer, Dallas megachurch pastor Bishop T.D. Jakes, said he wants the film to prompt people “to explore the death, burial and resurrection of Christ,” especially as the film is released during Holy Week and Easter.

But where the best-selling book tagged every image — however tenuously — to a passage from Scripture, the film jettisons doctrine. Instead, it celebrates an unabashed “God is love” view that goodness in this life gets you, your friends and your family a crown and wings in the next.

This friend-and-family-plan approach rings all the bells of popular attitudes toward heaven. For conservative Christians, however, it’s the theological equivalent of feasting on marshmallow Peeps and calling it Easter.

“I don’t want to impugn the motives of the filmmakers who made this with good intentions as something helpful for the church at large. We just come down on the side that it’s not really that helpful,” said Chris Larson, president of Ligonier Ministries, which publishes and broadcasts traditional Christian teachings from a Reformed Protestant perspective.

“Heaven is a real place, not just a concept, and we know 67 percent of Americans agree with this,” said Larson, drawing on research Ligionier commissioned from LifeWay Research.

“We just wish many people would go to the Bible, rather than the cinema, to find out what heaven is. The Bible says there’s only one way to salvation — through Jesus.”

Larson has not seen the film, and he admitted: “I didn’t read all the entire book. I don’t have a strong enough stomach. When you are describing the Holy Spirit as a kind of blue-ish image, we have definitely entered into the realm of speculative spirituality. … Experience does not validate Scripture. Scripture validates experience.”

So he’s not likely to catch the film, in which Colton’s second sister (never born because their mother, Sonja Burpo, miscarried early in pregnancy)  grows into a little girl on heavenly turf and his long-dead great-grandfather strolls about in youthful prime although no one ever knew whether Pop accepted Jesus.

Such a “convenient heaven” is a dangerous thing, says Pastor Tim Challies of Grace Fellowship Church in Toronto, who shredded the book’s theology in his blog. He has no plans to see the film, although if his children wanted to go, he’d let them — providing they discussed the film with him.

Todd Burpo, played by Greg Kinnear, does rely on a Bible in several movie scenes. But, Challies said in an interview, “There’s a difference between Scripture being used to back up your point and explaining what it actually means.”

But who wants to tell the tough-love church lady played by Margo Martindale — a film character not in the book — that her soldier-son may not be in heaven after all? Who wants to tell mourners that their loved one won’t be coming back to life on earth, like Colton, with verbal snapshots of a nice big God on a nice big throne?

And who doesn’t want to munch on Junior Mints while enjoying the image of a Jesus hunk resembling a Hugo Boss model in a bathrobe? Challies, for one.

Challies knows he’s up against a cultural tide that celebrates “the heaven we want, the Jesus we want, not the Jesus we’ve really got who is worthy of worship and won’t allow unholiness in heaven.”

However, around one in five Americans was skeptical about heaven under any circumstances, Pew found.

While heaven books delight publishers with divine sales numbers, the afterlife actually isn’t a top-of-mind issue for many people: 46 percent told a 2011 LifeWay Research survey they never wonder whether they will go to heaven. But it’s unknown whether they are unconcerned because they already feel sure of their ultimate fate one way or another.

It’s a safe bet to go with the upbeat: Most U.S. adults (65 percent) told the 2007 Baylor Religion Survey they are certain they’re heaven-bound themselves someday.

They also said they believe heaven will be real for most or all of people who are:

After that, however, the numbers dive. Far fewer predict heaven for their neighbors (56 percent), or for “average Americans” (53 percent). And merely 36 percent expect  “nonreligious” to climb the stairway to heaven.

Lisa Miller, in her new book, “Visions of Heaven: A Journey Through the Afterlife,” wrestles with questions across the centuries about the nature of heaven in the world’s many religious traditions. Photo courtesy of TIME

Three years ago, former megachurch pastor-turned-author Rob Bell’s controversial book “Love Wins” posited that heaven and hell are simply choices. Bell said he was utterly uninterested in judging other’s destiny, particularly because, be believes, “the heart of God is to rescue everyone from everything we need to be rescued from.”

Traditionalists promptly branded Bell a hipster heretic who made way too much room for mystery.

But mystery is bound in the popular imagination of heaven, unmoored from 2,000 years of Christian teachings.

Lisa Miller, in her new book, “Visions of Heaven: A Journey Through the Afterlife,” wrestles with questions across the centuries about the nature of heaven in the world’s many religious traditions.

The idea of heaven has a hold on us, she writes, because, “We do not want our love to end.”

The post ‘Heaven Is for Real’ — and for everyone in new film appeared first on Religion News Service.

Previous Jews ordered to register in east Ukraine
Next POLL: Can you be a Christian without believing in the resurrection?