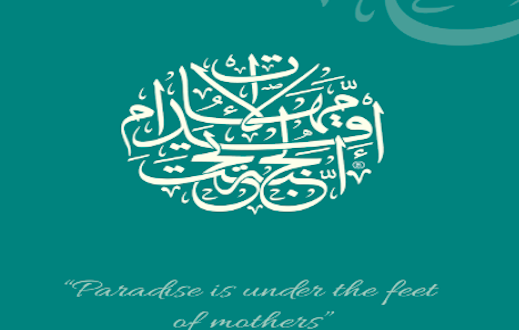 Heaven Lies Beneath the Feet Of Your Mother

Today we are celebrating Mother’s Day here in the USA. Our appreciation is not reliant on this one single day, as one day in a year cannot embrace all what a mother does for her children. Mother’s Day does not limit us to depict our love for our mothers only on this one day, but provides us yet another opportunity to make it special one more time. A mother deserves appreciation and respect every single moment of her life.

Through the pains of labor, when a mother brings us into this world until she takes her last breath, she dedicates herself to us. She welcomes us with both arms in this world, devotes herself and loves and comforts us unconditionally.

In a saying, it is stated that a man did the entire Hajj (pilgrimage) with his elderly mother on his back. “The Prophet Muhammad (pbuh) told him that this did not even repay his mother for a single kick the man gave his mother while she was bearing him in the womb.”

According to the Quran (Islam’s Holy Scripture) and Sunnah (actions and sayings of the Prophet Muhammad, pbuh), treating our parents with respect and love is an act of worship. The love and mercy of Almighty Allah (God) toward his creation is also explained by comparing it with the love of a mother.

According to a hadith (the collection of sayings of the Prophet Muhammad, pbuh), “heaven lies beneath the feet of your mother.”  This statement highly exerts the importance of a mother and her place in our lives.

Although there is a conflict on the authenticity of these two hadiths within the different sects of Islam, these hadith are still widely quoted and highlighted. Nevertheless in my view they only truly illustrate a mother’s significance in our lives.

In Chapter 17 of the Quran, we are guided to pray for our parents and ask Almighty Allah to have mercy on them just like they cherished us in our childhood.

“My Lord, have mercy upon them as they brought me up [when I was] small.”

So let’s take this Mother’s Day as an added opportunity. Let’s exert more effort to express our gratitude toward our mothers for all they do or did for us in their lives and let’s recite this prayer for them, for Allah (God) to have mercy on them.