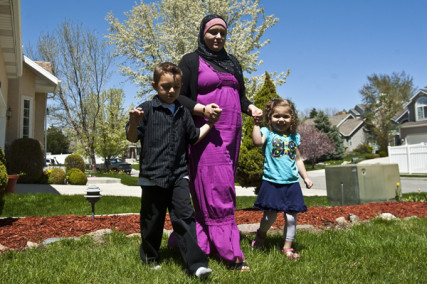 No, plenty of sweat, especially this year.

With Utahns baking under energy-sapping, forehead-dripping, water-chugging temperatures, the state’s Muslims are swearing off that liquid life force during the heat of the day — and the morning, and the evening. In Spokane, temperatures are above normal too. Weather.com reports that July's average high temperature is in the mid-80s, and already Spokane is in the mid-90s.

The annual 30-day fast known as Ramadan, one of Islam’s five pillars, began Tuesday (July 9) and requires that believers forgo food and drink. At this time of year, that means 15 hours of parched throats and unquenched thirst.

Exempt from fasting are pregnant or nursing mothers, prepubescent children and anyone with a medical condition. Anyone who is taking medication during the day should not fast, either.

“It is not meant to be detrimental to someone’s health,” said Anwar Arafat, the imam at Al-Noor Mosque near downtown Salt Lake City. “In fact, fasting for them is a sin.”

Beyond that, Arafat and other Muslim leaders encourage believers to stay near air conditioners and have minimal physical activity. Some build their vacation days around Ramadan, so they can nap or rest in the afternoon. They try to slow down and take it easy.

But the requirements are clear, the imam said. If you drink water, it’s not a legitimate fast.

“This is one of the most effective ways of learning self-control,” Arafat said. “It teaches you to abstain from things that are normally OK and focus on the spiritual.”

For Sharifa Al-Qaaydeh, the thirst is difficult.

“The hardest thing is not drinking,” said Al-Qaaydeh, who teaches nursing at the University of Utah. “When I was younger, Ramadan was in the winter. It is definitely harder in the summer.”

In the mornings, she stocks up on water and Gatorade, she said. At night, she prepares large, home-cooked meals, some of which she made this week and put in an extra freezer in the garage.

Al-Qaaydeh sees Ramadan as enormously beneficial, she said, “with the prayers, going to mosque all the time, with the community and with the kids.”

Recently, Al-Qaaydeh found a giant numbered fabric with pockets like a Christmas Advent calendar that she has hung up for her young children. She plans to fill those pockets with stories and trinkets to help them honor the Islamic month.

Ramadan is a great way “to teach kids about people who don’t get to eat, especially in our society in which we so overindulge when it comes to food,” she said.

The high temperatures worry Miriam Jaziri, a Muslim mother who lives in Holladay with her husband and two sons, ages 8 and 11.

“I am a little scared, but it usually turns out all right,” Jaziri said. “Last year was really hot, too, but you get used to it.”

Sunrise is about 6 a.m. these days, which means a Muslim family needs to arise, say prayers and finish eating for the day by then.

Sunset is about 9 p.m., after which the family members break their fast with a big meal — often with others or at the mosque — and then have evening prayers. Some people don’t get to bed before midnight.

“We usually get up about 45 minutes before dawn starts,” Jaziri said, “and first start off making myself some cereal and drink a lot of water.”

Then they go back to bed for a couple of hours.

In the evening, Jaziri might make a Moroccan soup, with some bread and vegetables. Nothing too heavy, before bedtime.

She has been slowly introducing the ritual to her children.

Last year, her then-10-year-old took part in the fast for almost three weeks, Jaziri said, but she made him stop, thinking he was not eating enough.

This year, he plans to go for the entire month. And she will monitor him closely, ensuring he gets enough nutrition.

“You want them to experience fasting by age of 7,” she said. “Some Muslims let kids have a nice breakfast and then fast ’til noon. Or they have a snack fast … or fast from lunch ’til nighttime.”

Ramadan focuses “you on the essence of life,” she said. “It reminds me why I am living, what really matters. It enhances my relationship with God.”

Throughout the year, she said, she might “get a little sloppy” in her Islamic worship.

This is a chance to do better, Jaziri said. So what’s a little heat?

Previous Is it moral to remote control insects?
Next What is discipleship?