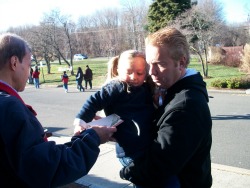 Abbas Alavi knew he had to do something for the children. Not the slain children who lost their lives in a hail of gun fire Friday morning inside Sandy Hook Elementary School. Those children were given up to God, said Abbas, a devout Muslim.

So, before Alavi left his Danbury home on Saturday morning ,he grabbed a handful of Christmas cards lying around his home, stuffed them with crisp $5 bills, and headed to Saint Rose of Lima Church, the site of a massive prayer vigil the night before and a place of solace for many.

The Catholic parish drew Alavi, even though he is a Muslim.  He said the horrific shootings that claimed the lives of more than two dozen people, 20 of them children, left him grief-stricken. The tragedy was so sad that “even a stone could cry.” he said.

After praying in the sanctuary, Alavi waited outside the church and when he saw a small child emerge or enter from the church, he handed them a card and offered them a Merry Christmas.

“I wanted to do something nice. It makes me feel better,” said Alavi, 62, who does not have children of his own.

The gesture was not lost on the parents whose children accepted Alavi gift. Many families had gone to the church to prayer or light a candle at the many memorials set up on the church grounds to remember the children who died.

Alavi gave Sandra Hankins' daughter a card. The mother was not surprised by Alavi's goodness. She said the tight-knit community of Sandy Hook had come together since the shootings, and will continue to be a source of healing for the days, months and years to come.

“People have been amazing. And now this man hands my child a Christmas card,” she said.