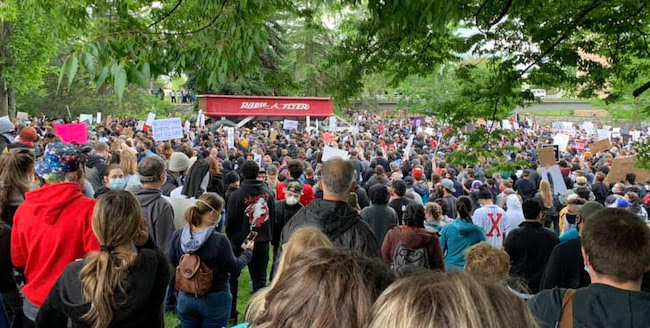 Contributed photo of May 31 protests in downtown Spokane

I suppose that I am an eternal optimist. An optimist might not be the right word, as I tend to gravitate toward the “glass half empty” in uncontrollable situations. However, I do work to cling to the idea that we can, and will, find a better way. Instead of focusing on the ephemeral idea of potential, I actually think that making the right moves, working to inspire through leadership, and effective policies and implementation can make a difference and move toward a brighter future for all.

I know. It is silly. It is quaint and I can be passed off as an uninformed loon.  And, maybe I am. Maybe I’m out of touch with reality and should lose any status in anybody’s mind that thought I ever showed any sort of wisdom.

My heart aches. I am buoyed by the amazing scenes of Spokane police officers kneeling with protesters, and the amazing video of Chris Swanson, Sherriff In Genessee County Michigan, where the marginalized people of Flint still live with the consequences of trusting the governmental power structures. Sherriff Swanson showed compassion and leadership in an area that is in great need of it. It was an amazing show of vulnerability and strength in the midst of strange times.

My heart aches for the law enforcement officers who are stuck in the middle. They’ve been used as a symbol, from both sides of the aisle, without receiving some of the key support they deserve. While policing budgets have gone up with grants aimed to militarize the equipment of the police, there are not enough police officers to work in the communities in which they serve. Technology advances, but humanity and community interaction fall behind. Police officers who are put into incredibly stressful situations, not knowing what lies around the corner on the next call, are asked to do a yeoman’s work. Their daily stress is intense, and then a match gets thrown into the tinder. When they fail, it hurts, and it hurts from all directions.

They are in the line of fire of the insults and physical assault, and are expected to be superhuman in their patient response. We need to support community policing and their desires to serve, making it a priority as a means to supporting social justice. Law enforcement is not the enemy of social justice. They are based in community and service.

My heart aches for those who have been systematically treated as being something less than a full human. Who have been hunted and murdered.  Their experience is so completely and utterly removed from my own small-town, lily-white background. If the actions of a white woman calling crying “wolf” on a birdwatcher in Central Park could at first be laughed off, the striking reality a few days later of the innocent George Floyd hit our collective souls like a brick. I can’t understand it. I see it. I don’t “get it.” I don’t have the words in my sheltered experience to even describe how to feel, and feel like I lack resources when seeking to act. I have never had to have an awareness that anger, even deeply righteous anger, may come across and label others, leading to continued acts of injustice against the community. While some government officials and members of society have been rallying to return to the economy as usual, because only some people will die, if I was a member of a group that faced lower levels of employment mixed with lower levels of healthcare and thus higher numbers of death from the disease, I may not trust the established powers either. In my gut, I scream, but I have no words.

My heart aches for the protesters, who know live the crushing reality of having no voice. While I hear people say “What do they have to complain about?” and “Why are they acting that way? I wouldn’t act that way?,” a realization that the marchers are trying to grasp for a voice – to simply be heard in a world that has continually silenced them has to be understood.

Pain has led them to the streets. As they have been silenced by powers, as powers push back, they rage to not be silenced again. Protests cause change, but because they make us uncomfortable (as they’re designed to) we seek ways to battle our own discomfort by focusing on how the protesters act, while ignoring the underlying message they’re trying to share. If the quiet protests don’t work, what will? How can those without a voice make us hear?

My heart aches for us. The COVID pandemic has many people on as our daily comforts have been upended. People are hurting. The very definitions of community that we’ve held to for the better part of our lives have been uprooted. Change is painful. Forced change is unbearable. People going without work and the money to take care of their loved ones, businesses struggling, and no end in sight. Hope is missing. People are raging and looking for an enemy to fight. An enemy to rally around and to control.   The problem with a virus with no vaccine or cure is that our normal weapons of control don’t work. What do we do when the norms are shaken? How should we respond when the norms don’t work? COVID has amplified the cracks and shown painful underlying truths about our communities – and, maybe ourselves.

My heart aches. While I know, somewhere inside of me, we as a community will come forward, I ache. Through those aches, I think of Dr. King’s words that the arc of the moral universe is long, but it bends toward justice, and pray for healing and reconciliation in our unreconciled world. What we’re seeing play out in our communities is uncomfortable. It is messy. It is emotional and scary. However, in the storm – in the cacophony of screams, anger, and chaos – there is a still small voice, which gives hope to my weary soul.

Previous Letter to the Editor: Statement Against Police Brutality Against People of Color
Next Finding Blessings in a Pandemic: Holy Temple COGIC sees opportunity to grow, learn