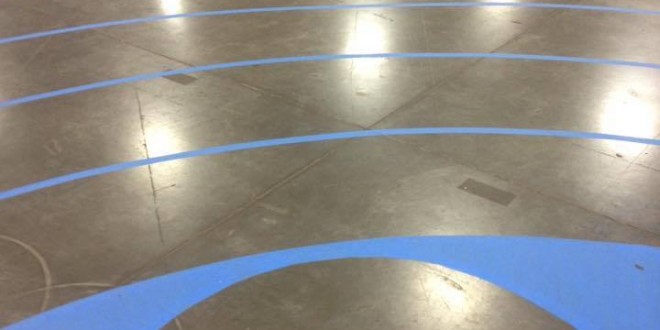 Bits of blue tape on the cement floor of a noisy convention center hall seem an unlikely tool for spiritual self healing and personal transformation. Getting into a meditative space, while walking the Labyrinth in the Salt Palace Convention Center in Salt Lake City, Utah was particularly challenging because there were so many other presentations, musical events, and films, competing for every minute of a 2015 Parliament of the World’s Religions participant.

Sometimes the most challenging distractions provide a counter balance to my mind garnering my meditative ability from a deeper place to be able to find that stillness for a few minutes. Such was my experience walking the labyrinth at the 2015 Parliament. It brought back memories of walking the Labyrinth at Chartres Cathedral as a child and the one here in Spokane at the Unitarian Universalist Church.

According to Elaine Stevens, the labyrinth team leader at the Unitarian Universalist Church, it “is a Celtic triple spiral design, an ancient symbol found in cultures as early as the Neolithic and Bronze ages. Triple spirals are symbolic, based on the number three, which is sacred in many ancient cultures.  It is different from a classical labyrinth in that the walker can step in and exit anywhere.  “Our labyrinth is a way to rearrange one’s energy and open up to the new perspectives,” said Stevens.

There are several labyrinths in Spokane including the one at St. John’s Cathedral. This Labyrinth is in the North Transept of the Cathedral from May through September and open for meditation and prayer. “You are welcome to walk it 9 a.m-4 p.m, Monday through Saturday,” according to St. John’s website.

The Rev. Roger Lynn sees the twists and turns of the labyrinth at Country Homes Christian Church on North Wall Street as an active experience to give each walker a path on their journey toward spiritual growth. “One thing I appreciate about a labyrinth is that it is open ended and allows people to be physically involved in their spiritual practice,” he said. “Something happens when we pray and move.”

Describing seven labyrinths worth exploring in a CNN article in Departures, Maud Doyle said, “These mazes have appeared in various corners of the world throughout history. One can be found in a petroglyph on a river shore in Goa, India; cut into the stones of Ireland’s many medieval churches; and arranged in a contemporary land-art installation at Lands End in San Francisco. Traditionally, they kept evil in and invaders out. They have been used as pleasure walks, meditative journeys, and symbolic life-into-death pilgrimages.”

One of the most famous is the Chartres Labyrinth in Chartres Cathedral in France. “A rose labyrinth, laid into the floor at Chartres Cathedral, was arranged by a bishop in 1360 for an Easter celebration of the liturgy of Vespers. During the ceremony, a representative walked to the labyrinth’s center, killed Satan (known until that time as the minotaur), triumphed over death and illuminated the world with a yellow ball that he tossed to his audience. The Chartres labyrinth is designed as a single path that coils and unfurls, turning back and forth within a 40-foot circle. Now, once a month, chairs that normally cover the display are moved so pilgrims can walk the maze — replicas of which exist at churches and mediation centers all across the world — to symbolically move, as at the crypts, toward reconciliation while passing from life into death,” said Doyle.

There are as many ways to think about labyrinths as there are labyrinths in the world. Healer, Mary Jo Bulbrook, describes a traditional labyrinth form as having seven rings representing the seven chakras or energy centers of the body. The path takes you back and forth along each of the seven rings and through the four directions: “Spirit in North, Emotion in the East, Physical in the South, and Mental in the West,” said Bulbrook.

There are also many journal articles like the 2003 article in the Clinical Journal of Oncology Nursing. Rita Abdallah-Baran explains how, “at the Ireland Cancer Center in Elyria, Ohio, complementary and integrative therapies, including the labyrinth, in conjunction with conventional cancer treatment (e.g. surgery, chemotherapy, radiation, biotherapy), generate and promote a patient culture rooted in holistic healing. ”

One of the 101 Ways to Use a Classical Labyrinth,  said Daniel H. Johnston, Ph.D. at the Medical Center of Central Georgia, is what he calls the Joy Walk. Some participants with bottles of bubbles surround the labyrinth and blow bubbles to those who walk. Those walking the labyrinth dance, wave scarves, beat drums, make music, and celebrate. As those walking finish they take the place of a bubble blowers who now walk the labyrinth. All celebrate. This is a good energy building activity and a good closing activity.”

Previous Ask A Jew: How is Judaism both a religion and a race?
Next Local neighborhoods can turn the tide of violence