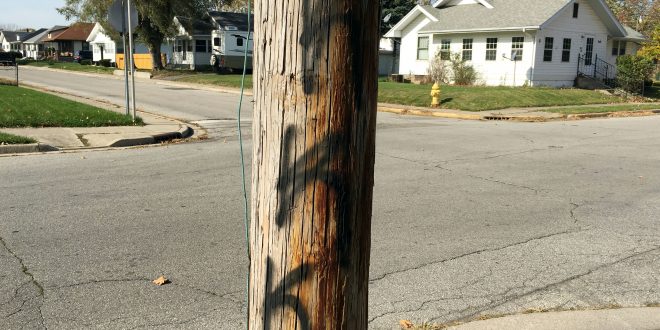 *Editor’s Note: language in this article may offend some readers

KOKOMO, Indiana (Reuters) – The lettering is crude, scrawled in black spray paint on the sidewalk in front of Karen Peters’ neatly kept home in the quiet, working class neighborhood where she’s lived most of her life. But the contempt is clear.

The racially charged graffiti appeared in mid-October on cars, homes and telephone poles in the small city of Kokomo, Indiana. Many victims, like Peters, were African American, though some were not. Many also had lawn signs for Democratic candidates in this week’s presidential election, and the signs at several homes were painted over with the Ku Klux Klan’s notorious initials.

“I think it’s a political thing; it’s getting out of hand,” said Peters, who believes the heated tenor of the presidential campaign – and especially the aggressive, nativist rhetoric of Republican candidate Donald Trump – has emboldened extremists.

“When you have (candidates) saying ignorant things, maybe other people think it’s ok to do this stuff, and that’s pretty doggone sad … It seems like our country is going backwards.”

Police have no suspects in the attacks. Democrats, including the mayor and local party officials, believe they were politically motivated. Local Republicans are skeptical, suggesting the damage is the work of ignorant hooligans with no place in the party.

Across the United States, the inflammatory and confrontational tone of political rhetoric is creeping into public discourse and polarizing the electorate.

It’s hard to quantify the impact; there is no national data that tracks politically motivated crimes or incendiary speech.

However, the percentage of voters who believe insulting political opponents is “sometimes fair game” has climbed over the campaign season, from 30 percent in March to 43 percent in October, according to surveys by the non-partisan Pew Research Center. A majority of voters for both parties have “very unfavorable” views of the other party – a first since Pew began asking the question in 1992 – and distrust in government is hovering near all-time lows.

“These indicators reflect inter-group tensions that can translate into everything from coarse discourse or low levels of aggression all the way up to extremist acts,” said Brian Levin, director of the Center for the Study of Hate and Extremism at California State University.

While much of the venom has been aimed at immigrants, African Americans and other groups typically aligned with Democratic presidential candidate Hillary Clinton, Republicans also have faced vitriol and hostility.

Much of the debate over extremism has focused on the so-called Alt-Right, a loose-knit movement of white nationalists, anti-Semites and immigration foes that has emerged from the political shadows to align itself with the Trump campaign.

Trump’s vows to build a wall on the Mexican border, deport millions of illegal immigrants and scrutinize Muslims for ties to terrorism have energized the Alt-Right community.

Such rhetoric has helped legitimize the Alt-Right’s concerns about an erosion of the country’s white, Christian majority, said Michael Hill, a self-described white supremacist, anti-Semite and xenophobe who heads the League of the South, a “Southern Nationalist” group dedicated to creating an independent “white man’s land.”

“The general political climate that sort of surrounds his campaign has been very fruitful, not only for us, but for other right-wing groups,” Hill said.

Similar nationalist undercurrents have stirred other countries, from Russia to Japan to Britain. Last summer, as Britain’s debate over leaving the European Union reached a fever pitch, Jo Cox, a pro-EU lawmaker, was shot and stabbed in the street. Murder suspect Thomas Mair proclaimed “death to traitors, freedom for Britain.”

In the United States, reports of hostile political displays, vandalism and violence are cropping up regularly.

In Mississippi, a black church was burned and painted with “Vote Trump.” In North Carolina, a county Republican office was set ablaze last month and a nearby building spray painted with “Nazi Republicans leave town.” In Ohio, a truck load of manure was dumped at a Democratic campaign office. In Utah, a man displaying Trump yard signs found KKK graffiti on his car. In Wisconsin, a fan at a college football game wore a President Barack Obama mask with a noose on his neck.

Neither the Trump nor the Clinton campaigns responded to requests for comment.

Trump’s positions are consistent with the Alt-Right goal of “slowing the dispossession of whites,” said Jared Taylor, a white nationalist whose website, American Renaissance, is a movement favorite. But the media is over-hyping his support within the Alt-Right “in an attempt to discredit him,” Taylor added.

Trump has been criticized by both Democrats and some Republicans for being slow to condemn the more extreme elements of the political right. But when a leading KKK newspaper ran a pro-Trump story on its front page last week, his campaign immediately issued a statement rejecting the “repulsive” article.

Taylor, Hill and other Alt-Right figures say they don’t advocate or condone vandalism or violence. They dismiss the notion that their rhetoric constitutes hate speech, arguing that their vilification by the left is far more hateful.

Left-wing extremists do have a history of aggressive confrontation with people or groups seen as fascist or racist, says Heidi Beirich, of the Southern Poverty Law Center, an organization that monitors extremist movements. “There’s usually more violence from the anti-racists than the racists,” she said.

The free speech provisions of the U.S. Constitution’s First Amendment grant broad protections for inflammatory rhetoric. But state and federal statutes do give law enforcement agencies authority to investigate and prosecute “hate crimes” motivated by bias against a race, ethnicity, religion, disability or sexual orientation.

Some who study and work in the political arena believe there has been a general erosion in civility that began long before the start of the current presidential race.

Craig Dunn, Republican party chairman for Howard County, Indiana, which includes Kokomo, says that a minority of extreme voices are being amplified over the Internet and social media, fueling “a general breakdown in civility.”

Local officials worry about how their community is being affected.

“The atmosphere is “more volatile, there’s more tension,” said Kokomo Mayor Greg Goodnight, a Democrat. The graffiti attacks were deeply troubling, he adds. “I don’t remember anything like this ever happening here.”

Monica Fowler, 43, who had “KKK” sprayed on her Democratic yard signs, is struggling with the attacks. “It’s okay to disagree,” she says. “But if what you’re doing is going to scare or harm another person, how dare you.”

Previous Whom should I believe?
Next The Judaica of Etsy