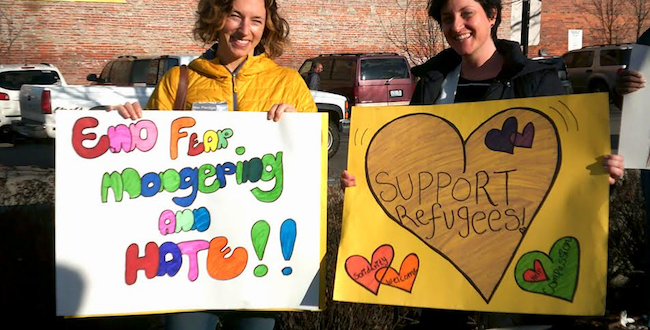 In the early hours of March 16, several buildings in downtown Spokane were vandalized, or “attacked” locals said, with the posting of fliers bearing anti-immigration, anti-refugee, and specifically anti-Semitic remarks and drawings.

The fliers were posted on the STA Plaza, a downtown Starbucks coffee shop, The Spokane County Democratic Headquarters, and the Spokane Community Building, which houses among other things, the Peace and Justice Action League of Spokane, Center for Justice, and Refugee Connections Spokane. It’s suspected that these were targeted because of their known support for immigrants and refugees. The fliers posted at the Community Building was discovered by an employee, who is a refugee.

Though the fliers were initially thrown away, they were later retrieved by staff and pasted into a collage with the idea that though the message is disturbing it is important to see what is being spread around. Several of the fliers also contained invitations to white nationalist websites therightstuff.biz and dailystormer.com.

Phillip Tyler, president of the Spokane NAACP, said the vandalism is domestic terrorism.

“This is a direct affront to the very work these organizations do,” he said.

Yet the targeted organizations were not deterred. A PJALS rally was held yesterday, which was planned before the fliers were found. Attendees contrasted the morning’s messages of hatred with signs bearing sentiments of acceptance, such as: “Reject Prejudice,” “Love Thy Muslim Neighbor,” and “There is no ‘them’, we the people,” and with chants of: “No hate, no fear, immigrants are welcome here!”

Mayor David Condon of Spokane also made plain that hateful behavior is not acceptable in Spokane.

“Spokane does not and will not tolerate the offensive acts of an individuals or individuals. The hurtful language is in stark contrast to who we are and serves only to galvanize our resolve as a city and community to send a clear message that bias, intolerance and hate has no place in Spokane. The Spokane Police Department is aware of the posters and remains firmly focused on protecting the safety of everyone in our city,” he said in a statement.

Will you consider making a donation so FāVS can continue this type of storytelling?

Previous Freeing religion from ethnicity: what I learned in Malaysia
Next How this Christian movement is growing in the midst of religious decline