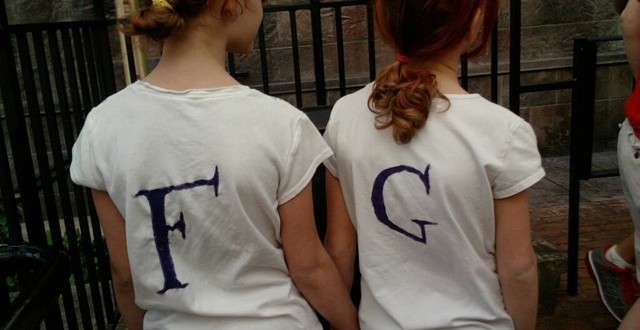 “Like the wizards of Harry Potter, we Jews have our own secret world of practices and rituals. Wizards have wands and owls, wear robes, and cast spells. We wear tallitot, kippot, eat kosher food, and study and pray in Hebrew. A yad looks an awful lot like a wand. Jews even have their own Diagon Alley in very Jewish neighborhoods. In places like New York, New Jersey, and Chicago there are streets full of Jewish shops like kosher restaurants, kosher butchers, Judaica shops and Jewish book stores. Most non­Jews don’t even know it exists.”  (Ellie’s D’var Torah)

I vividly remember objecting when our twin daughters were about 8 or 9 years old and asked about a Harry Potter themed b’not mitzvah (b’not is the plural of bat). I argued, “Absolutely not. Harry Potter has nothing to do with Judaism. You don’t need a theme. The theme is Torah and being a Jewish adult.” While I was actually a huge fan of Harry Potter  (We are evidence of what happens when Potterheads reproduce. It was my husband and I who sparked and fed our daughters’ interest in the books from a very young age), I could see absolutely no way the two could combine. Oh how things would change!

Our daughters’ Torah portion for their b’not mitzvah weekend was Shoftim (Deut  16:18-21:9). Shoftim deals with rules and order and includes the familiar line, “Justice justice shall you pursue.”  It also includes the ban against witchcraft and sorcery.

Both of my girls saw that and immediately launched into a loud argument over which one was going to discuss Harry Potter in their d’var torah (sermon). In the end, they both did.

Ellie went first. She explained, “Some religious people ban the Harry Potter books (often without reading them) because they believe the books promote sorcery. Some people ban things they don’t understand. That is not the Jewish tradition. Jews study and question things rather than banning them.”

She threw in some quotations from Maimonides and other Jewish texts and a few lines from her Haftorah which supported the idea that there’s nothing to fear from witchcraft. We Jews shouldn’t practice it, but we’re completely consistent with Jewish tradition when we explore rather than ban.

She also discussed the comfort she found in the parallels between Harry Potter and life as a Jew, particularly in places like Spokane where there are so few Jews that we can seem to some, as mythical as house elves or Crumple-Horned Snorkack.

In Lily’s d’var, she argued that the Harry Potter series actually inspired tikkun olam (Lit “Repairing the World” Projects to increase justice and healing in the world), a very Jewish concept.

She spoke of organizations like the Harry Potter Alliance whose mission statement says, “The Harry Potter Alliance turns fans into heroes. We’re changing the world by making activism accessible through the power of story. Since 2005, we’ve engaged millions of fans through our work for equality, human rights, and literacy.” Inspired by Harry Potter, one part of the girls’ b’not mitzvah project included collecting books for Accio Books, the yearly HPA book drive for children and teens in need.

She ended by noting, “J.K. Rowling once said. ‘We do not need magic to transform our world. We carry all that power inside ourselves already.’ We don’t use magic to perform tikkun olam. We can recognize injustice in the world and work to make it better. Dumbeldore and The HPA say ‘The weapon we have is love.’ Justice is a big part of being Jewish, of our lives, and who we are today. The more justice performed the better the world will become. By doing our part, the future will hold less pollution, more equal rights, less poverty, nicer people, and a better world for us all.”

Our favorite children’s librarian came all the way from Oklahoma to be a part of the day. Her gift to the girls included Doctor Who t-shirts and a bracelet for each of them. She did not know what the girls planned to discuss that day, but her gift was absolutely perfect. One was engraved,  “I solemnly swear I am up to no good.” The other read “Mischief Managed;” phrases very well known to those who love Harry Potter, especially the Weasley twins (with whom our girls have always identified).

We Jews are forbidden from creating or destroying on Shabbat. That includes words. So to avoid that, I made the girls cake toppers with a banner. They were two peg dolls designed to resemble them. They held a banner which read, “Mazel tov Ellie & Lily.”  Lily’s peg doll cake topper was dressed in her ballet uniform with ballet shoes hanging over her shoulder. Ellie’s had blue hair like she does and clutched a tiny copy of Harry Potter and The Goblet of Fire in Hebrew under her arm.  At Ellie’s doll’s feet was a stack of itty bitty books and a tiny clay version of one of our dogs, Mischief-Managed.

We are such a Harry Potter-loving family that our walls at home are graced with our very own Weasley clock. A cousin (and fellow Potterhead) made one for us for Chanukah one year. It has hands with each of our names and faces and includes our frequently visited places. When guests walked into lunch after the girls’ ceremony, they passed by our Weasley clock where all hands pointed to “Shul” (synagogue).

During the ceremony, we gave our girls t-shirts which read, “We Are Book Eight.” I explained,

“’We are book eight,’ declared the Harry Potter Alliance. In time, Harry Potter fans came to realize they didn’t need Jo Rowling to write more books.  She had given the world seven books. Their lives could be the eighth book. They had the power to continue the story on their own. They embraced Harry’s story and made it part of theirs. Inspired by the books, they took what they learned and set out to change the world.  You girls have done the same. You have used the lessons as a springboard for your own story—your own acts of tikkun olam. You embraced that story as a way to better understand yourselves and then wrote your own next chapter. This is exactly what we hope you continue to do throughout your lives. Hold the stories that help define you close to your heart as you write your own unique tales.”

Previous How to leave a comment on SpokaneFAVS posts
Next Kissing corpses is helping spread Ebola, expert says