Harold Camping says May 21 prediction was ‘incorrect and sinful’ 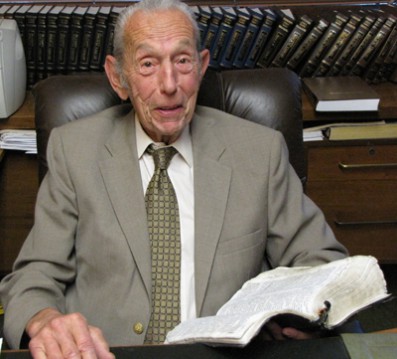 Radio evangelist Harold Camping has called his erroneous prediction that the world would end last May 21 an “incorrect and sinful statement” and said his ministry is out of the prediction business. “We have learned the very painful lesson that all of creation is in God’s hands and he will end time in his time, not ours!” reads the statement signed by Camping and his staff and posted on his ministry’s website. “We humbly recognize that God may not tell his people the date when Christ will return, any more than he tells anyone the date they will die physically.” The “March 2012” letter, which included multiple mea culpas, was released with a note from the board of California-based Family Radio. The group intended to mail it to listeners first, but immediately posted it “to avoid confusion” after it was leaked online. Camping said people have continued to wish for another prediction, but he is now convinced that critics were correct about the biblical admonition that “of that day and hour knoweth no man.” “We must also openly acknowledge that we have no new evidence pointing to another date for the end of the world,” he wrote. “Though many dates are circulating, Family Radio has no interest in even considering another date.” The letter makes no reference to Camping’s explanation last year that he had miscalculated by five months and the world would instead end on Oct. 21, 2011. The dual predictions landed Camping in the No. 7 spot of the Religion Newswriters Association’s list of the top 10 religion stories of 2011.

www.tracy-simmons.com
Previous VIDEO: Church sounds off with Planned Parenthood executive
Next Why I’m afraid to take my son out in public

I am glad that he made an apology but I feel very sad for the people who, under his sway, sold all their possessions, gave away all their savings, and cut off ties to their jobs ahead of the chosen date.

I am concerned as we get closer to 12-21-12 there will be many people who follow someone like this fellow.

With all the hype around 2012 there are already people believing such thing. People are scared of death and think they can plan for it.