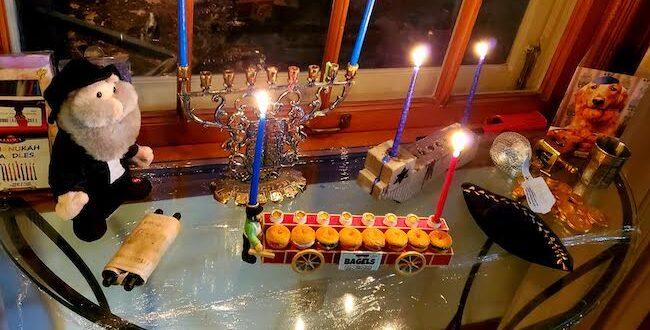 I do not remember when I first saw the photo.

But the image was burned into my consciousness years ago. Each year, as Hanukkah approaches, I seek it out once again.

The photo was taken in 1932, in Kiel, Germany, by Rachel Posner, wife of Rabbi Akiva Posner. It was a year before Hitler’s ascent to power, but the Nazis were gaining strength daily and their deadly anti-Semitic intentions were clear to all.

On the first night of Hanukkah, 1932, Rachel Posner placed the family menorah in a window and took the startling photo, the menorah in the foreground and across the street, in the background, a Nazi swastika flag.

This was not an incidental juxtaposition. Rachel Posner knew precisely what she was doing. As reported in this 2017 New York Times column, on the back of the photo “she scribbled in German, ‘Death to Judah’ so the flag says, ‘Judah will live forever,’ so the light answers.”

Regular readers will know that I am a cultural Jew, raised in a Jewish family, but no longer observant myself. Except when it comes time for Hanukkah.

A bit of Jewish history is in order.

In the second century BCE, Syrians conquered Judea, what we now think of as Israel, and demolished Jerusalem’s Second Temple, the holiest site in Judea. The Syrian Seleucid Empire was built on Greek traditions and religion. Jews were ordered to worship Greek gods and the holdouts were hunted down and butchered.

But history (embellished by no little myth) tells us the Jews rose against Syrian King Antiochus IV. The revolt was led by the family Maccabee and the warrior Judah Maccabee, known as “the hammer.” The Syrians were thrown out of Judea and the temple was rebuilt and rededicated.

As the legend goes, there was only enough holy oil left to light the rededicated temple’s sacred lamps for one night. But the lamps burned for eight nights, strong and bright, until a new supply of consecrated oil could be obtained.

That is the miracle celebrated by the “festival of lights.”

As Jewish religious holidays go, it is minor. The big three – Rosh Hashanah (the Jewish new year), Yom Kippur (the day of atonement), and Passover (celebrating the liberation from Egypt) – are far more important.

During the holiday, Jews light their menorah, a candelabra with nine branches. The center branch, the shamash, is used to light one candle the first night and an additional candle each night for eight days until all candles are lit. It is mostly a happy holiday, a favorite of children who play games with a top, known as a dreidel, sing songs, and consume delicious treats fried in oil to commemorate the restoration of holy oil. In some households, small presents are exchanged each night.

The date is set by the Jewish calendar, falling on the 25th day of Kislev. By the western Gregorian calendar, the start date varies from year to year. This year, Hanukkah begins at sunset Sunday and continues through Dec. 6.

Because the holiday coincides with the Christmas season, it has been elevated by American Jews, particularly, to provide their children with something of a comparable holiday celebration.

But the holiday’s importance transcends eight days of gift-giving, baking, and games.

The Talmud, the collection of Jewish holy texts, obligates Jews to place their Hanukkah menorahs in a street-facing window so passersby can see the lights, bright in the evening darkness.

That obligation is what drove Rachel Posner to place her family’s menorah in a front window, defiant in the face of Nazi hate and an invitation to retaliation.

As a young boy, I was captivated by the Maccabee legend. There were plenty of mainstream movie and TV heroes to capture a boy’s imagination in the 1950s. Davy Crockett. The Lone Ranger. Zorro. Disney gave us “The Swamp Fox,” a real-life hero of the American revolution, who led a guerilla force against the British in the Carolinas.

But Judah Maccabee was one of us. I pictured him as a bearded, sword wielding, Jewish John Wayne, destroying the idol-worshipping Syrians while liberating Judea. A great story.

Later, I came to understand, as Rachel Posner demonstrated, that Hanukkah is so much more than an action story. The menorah, placed in public view, is a defiant light in the darkness, a symbol of Jewish resistance to the forces that would obliterate us.

And that symbolism is as important today as it was in 1932. Anti-Semitism is on the rise again, here and in Europe. As a Jew, even a non-observant Jew, I feel the threat as never before.

And so, I will celebrate Hanukkah when it begins at sunset Sunday, just as I have since childhood.

I have collected quite a few menorahs through the years. I still have my family’s old brass menorah, though it is missing the shamash. I have light-hearted menorahs, this year including a doggie menorah where each candle is supported by a different dog breed. I have menorahs from several Jewish museums and Judaica shops, including one from the United States Memorial Holocaust Museum, each candle held up by a driven nail. Very powerful.

Generally, I light three menorahs each night, placed on a front-window table and facing the street. But on the last night, I light only one. It is carved out of gray stone, unadorned except for a muted Star of David carved on the end. It is stark, grim even when fully lit.

This year, I am adding an outdoor menorah that will go on the front porch. For me, in this climate of rising hate, it feels like my own Rachel Posner moment, however slight.

As The New York Times reported, the Posner’s fled Germany, with Rabbi Posner also rescuing many of his flock. The menorah survives and, for 51 weeks of the year, is on display in Israel’s Holocaust museum, Yad Vashem.

But the Posner family descendants take the menorah home for one week each year as the centerpiece of their Hanukkah celebration.

The Posners’ great-grandson, Akiva Baruch Mansbach, lights the menorah. “The same light that my great-grandparents lit in the exile in Germany is the light that so many light today in Israel. It demonstrates the continuity of Jewish history,” he told The Times.

The traditional holiday greeting among Jews – and suitable for gentiles, too – is “happy Hanukkah.” But for many of us there is a coda, represented by the Posner menorah and my own somber, gray-stone version. “Never forget.”

Previous Exemplar of Humankind
Next Pilgrims and Thanksgivings