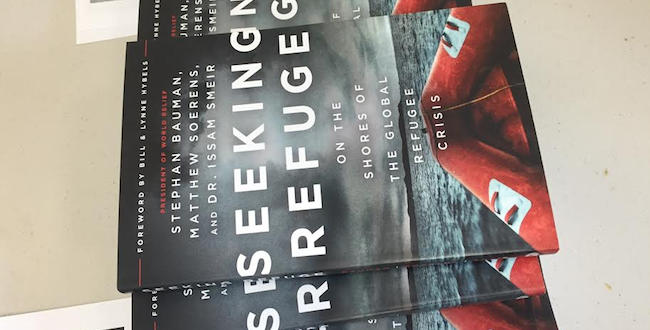 Despite the nationwide outrage over refugees coming to the United States, Spokane has opened its arms to the vulnerable population for years. This year, the city’s arms opened so wide that it reached the annual capacity allowed – 600 refugees – and it’s only October.

That’s according to Erin Colladay, development specialist of World Relief Spokane, in a presentation to the Hamblen Park Presbyterian Church as Part One of a series called Seeking Refuge: Christian Responsibility for the Care of Refugees.

Roland Madany, HPPC member and a Lebanese American, said he and the church has been tackling current events and the Christian response to them for a couple of years, including topics like mental health and the Islamic State group.

Refugees are just another contentious topic in the U.S., topping nightly news and fueling presidential debates. Nearly 85,000 refugees entered the U.S. in fiscal year 2016, according to the Pew Research Center. Almost half of those were Muslim, while almost the same number (37,521) were Christian.

Colladay said the hate against refugees comes from a misunderstanding. Many people believe refugees are “flooding” into our borders, without proper screenings to keep Americans safe. But Colladay said refugees have a tougher route to citizenship than immigrants. Five U.S. intelligence agencies approve each refugee for resettlement, and unlike in the European Union, Colladay said asylum seekers cannot just fly (boat, or walk) into the U.S.

“They are cleared overseas before they set foot on American soil,” she said.

“Choice” is the main difference between an immigrant and a refugee, though. Refugees are forced to leave the country, Colladay said, because of race, religion, nationality, membership of a social group or political opinion, and often live in refugee camps for years or even decades.

President Barack Obama allowed an extra 10,000 refugees to enter the country in 2016, amid the Syrian crises. From 2013-15, though, most Spokane refugees came from Iraq (305), Burma (270) and the Democratic Republic of the Congo (171), according to Colladay’s statistics. Spokane only received one Syrian in 2015 and a handful in 2016 (numbers through World Relief weren’t available yet).

Colladay said World Relief estimates 40,000 current and/or former refugees live in Spokane. Bets are, some are neighbors – and some may need help and prayers. Jesus calls on Christians to help their neighbors, Colladay emphasized.

She said people can help their refugee neighbors by:

Colladay’s presentation kicked off the four-part Seeing Refuge series led by various speakers Sundays from 10:30-11:30 a.m. in HPPC’s Skylight Room. “Fostering Refugee Youth” takes place this Sunday, while Nov. 6 is “Entering the World of the Refugee: Stories of Resettlement” and Nov. 13 is “The Biblical Charge to Care.” For a full schedule of events and descriptions, visit the HPPC website. The series is free and open to the public.

“Rather than more fear, we want people to know how they can combat fear and hatred with love,” said HPPC associate pastor Betsey Moe. “This is a way for people to get their feet wet.”

Will you hep support local journalism by making a tax-deductible donation to SpokaneFāVS?