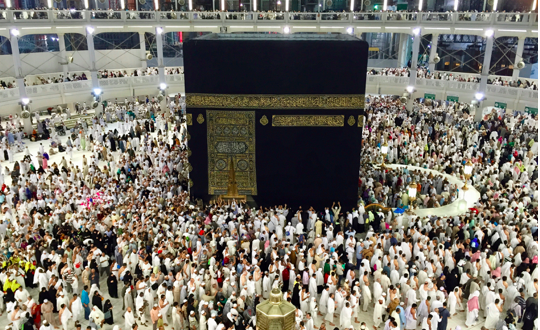 Picture courtesy: Maimoona Harrington – Holy Kaaba, Makkah 2015 – The brass fixture in picture is called Maqam-e-Ibrahimi (the Station of Ibrahim), the rock on which Prophet Ibrahim (peace be upon him) stood while building the upper walls of the Holy Kaaba.

Aug. 23 marked the beginning of Zul-Hijjah, the 12th and the last month of Islamic lunar calendar. The streets of Makkah, Saudi Arabia are echoing with the sounds of “Labaik Allah Huma Labaik-Here I am, O Allah, here I am.” Muslims all across the world those who can afford it, perform Hajj in this month.  In 2016 about 1.5 million people from across the world performed Hajj in Saudi Arabia, according to Al-Jazeera. Each years this figure increases.

What is the Hajj? The Hajj is one of the five pillars of Islam, and all able-bodied Muslims are required to perform it once in their lifetime. The Hajj is seen as a chance to wipe clean past sins and start fresh.

What one witnesses during Hajj are the virtues of passion, love, enthusiasm, sacrifice, surrender, devotion and a desire of forgiveness by the believers.  Hajj is a journey of complete surrender, submission and a journey of purification where one wants to shed down all his or her sins and reborn!

The Hajj ends on the 10th day of Zul-Hijjah with a slaughter of a goat, lamb, sheep or cow by the believers. This sacrifice is a religious sacrifice, a sacrifice of belief, obedience and renunciation. After the sacrifice Muslims celebrate the sacrifice feast called Eid-al-Adha. This sacrifice of religion by Prophet Abraham (peace be upon him) is believed in all three monotheistic religions, Judaism, Christianity and Islam.

Hence there are few differences in their storyline. An article published in “The Week” tells us the story and its difference between three Abrahamic religions.

“Islamic scripture tells how Allah commanded Ibrahim– known as Abraham to Christians and Jews – to sacrifice his son as a test of his devotion. Despite his love for the boy, Ibrahim duly prepared to carry out Allah’s command. However, at the last moment, Allah tells Ibrahim to spare the child and sacrifice something else instead. In remembrance of Ibrahim’s willingness to submit himself to the divine will, Muslim families traditionally sacrifice an animal during Eid al-Adha. Non-Muslims will probably recognise the story from the Bible, where it appears in a similar form. Interestingly, Muslim scholars generally believe that the son in question was Ishmael, Abraham’s son by his concubine Hagar, whereas Jews and Christians name the son in question as Isaac, Abraham’s son with his wife Sarah. Another difference is that Ibrahim in the Koran, in contrast to his Biblical counterpart, tells his son about the divine command, and the then boy urges his father to comply with Allah’s will. Therefore, Ishmael’s obedience and submission are also commemorated during Eid al-Adha.”

The question is: Does the differences matter more than the similarities? What matters in my view is that we all believe on Prophet Ibrahim (peace be upon him), his sacrifice, act of his obedience and submission to the Allah. These similarities and our connection with him and Allah are stronger than we know. In this holy month of Zul-Hijjah, let us seek forgiveness, let us forget our differences and depart on the journey of peace and harmony for our future generations. Let us celebrate Prophet Ibrahim (peace be upon him)’s sacrifice and his love and devotion for our Almighty Allah.