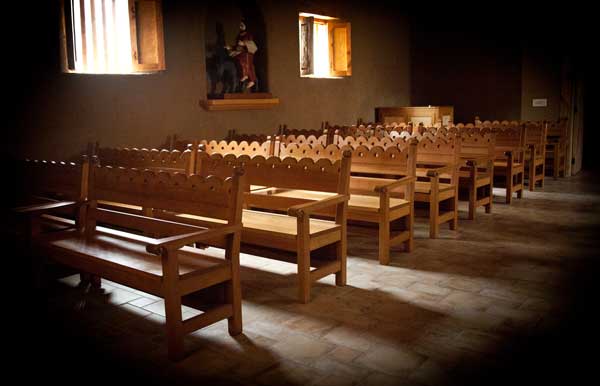 Every year, an increasing number of millions of Americans attend church for the last time, and for a myriad of reasons, are never compelled to go back. I joined this movement two decades ago, not knowing it was a movement, mostly unaware others were doing the same all across the country. Since then I’ve talked to many Humanists, atheists, agnostics, and spiritual-but-not-religious people about their experience with religion. While their stories are each nuanced and unique, most of them have a common thread: they didn’t make the decision to leave lightly, and they aren’t going back.

Several surveys and polls have chronicled this shift in the religious landscape, but the most cited are the landmark studies done by the Pew Research Center, “Nones” On The Rise  (2012) and U.S. Public Becoming Less Religious (2015). Their 2012 report showed a huge jump in those who answer “none” when asked their religion – from 15 percent to 20 percent in just five years, making the “nones” the fastest growing religious group in the United States. The latest study released in November 2015 shows that the growth of the “nones” is keeping steady, currently outnumbering any religious group except evangelical Protestants. If the trend continues, even evangelicals will be surpassed in just three years.

But who are the “nones”? Can they legitimately be considered a religious group at all? At first glance, the only thing they have in common is that they don’t identify with an organized religion. Two-thirds of them believe in a god or universal spirit. Using Pew’s data, I think it makes sense to divide “nones” into three roughly equal groups (the names are my own invention):

• Spirituals: believers who say “religion is important” to them

• Apathetics: believers who say religion is not important to them

When you look at these groups and their world-views, as reported by Pew, you find that Apathetics and Dones have a lot more in common with each other, and combined they better represent a cohesive group. Together they constitute about 16 percent of the total population. Their growth is also outpacing Spirituals, which means the impressive rise of the “nones” is at its core fueled by a more intense explosion of Apathetics and Dones.

Why are Apathetics and Dones on the rise? From my conversations with the non-religious, the average individual who leaves religion often has several reasons. Despite this, many formerly religious people can point to one issue that was the core motivation for them to take that final step solidly into the non-believer camp.

For some, that core issue is a perceived conflict between scientific and religious worldviews, others were victims of religious abuse, some feel judged, ostracized, or unwelcome in faith communities … but in my experience the number one factor in the rise of the religious “nones” is a strong regard for human rights and deeply held moral positions; chief among them being the cultural fight for LGBT rights. On the question of whether homosexuality should be accepted by society, 94 percent of atheists and agnostics agree that it should. You can see here the split I mentioned earlier among the three groups of “nones” – Dones (94 percent) and Apathetics (83 percent) have an overwhelming support for LGBT acceptance, but Spirituals lag behind at just 70 percent, more in line with organized religious groups.

On the other hand, the lack of interest in religion, for many, stems from a perception that science and religion are often in conflict. Dones, at 95 percent, and Apathetics, at 85 percent, overwhelmingly accept evolution. In contrast, Spirituals, at 65 percent, are roughly in line with the population as a whole. Similar splits are seen between Spirituals and other “nones” in nearly every other question that Pew asks.

Now that I’ve laid out my argument that Dones and Apathetics, as a segment of the “nones”, make up a more cohesive demographic than “nones” as a whole, what more can we say about them? We already know some of their views on LGBT rights and science. They also are the group most likely to support legal access to abortion and government aid to the poor. Not surprisingly, the majority identify as liberal, and they overwhelmingly vote Democratic.

The Pew results also help dispel some common myths about the non-religious. Counter to the old joke – that it’s easy to spot an atheist at a party, because he’s the one who won’t stop talking about God – atheists are much less likely to share their religious views with others and are slightly more likely to express a sense of wonder about the universe than their Christian counterparts (despite what Oprah Winfrey says). The fact that “nones” as a whole are becoming more secular also means they likely aren’t ripe for proselytization by religious groups.

I think the way most people interpret the changing religious landscape – as a movement away from religion – misses the true direction of this exodus. Apathetics and Dones aren’t lost, wandering in the desert, making up their ethics on the spot and living in a nihilistic or hedonistic stupor. The movement isn’t away from religion, it’s toward a reason-based worldview that is flexible enough to adapt to new ideas and a more compassionate view of humanity. We are “nones” because we looked deep into the mysteries of the universe, and discovered that religion was limiting our quest for knowledge. We looked inside ourselves, and into the eyes of our neighbors, and found that religion was limiting our morality.

Join SpokaneFAVS for a Coffee Talk forum on “The Changing Religious Landscape” at 10 a.m., Dec. 5 at Indaba Coffee, 1425 W Broadway. Simmons is a panelist.

Previous Why not ‘just do it?’ Let me count the ways
Next Muslim Americans fear demonization of Islam after mass Shooting