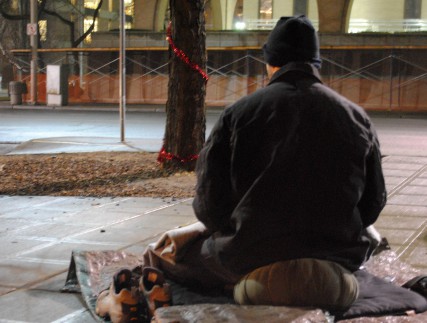 They didn't wave signs or urge passersby to sound their horns. This time, the protesters were silent. They sat on stools or on the ground, hands folded loosely in their laps, eyes closed with a candle flickering by their side. Others cupped the candle in their hands and quietly paced the Occupy Spokane triangle. All of them were meditating, looking inward rather than pointing fingers at the flush corporations that many say have thrown the economy off balance. [youtube http://www.youtube.com/watch?v=F0mu_P1Urho] “It's easy to see faults in others. Corporations are bigger, so their faults are magnified. Once in awhile we need to look at ourselves,” said Sicco Rood, a local Buddhist who organized the event, and also a member of the Zen Center of Spokane. Although Spokane's Occupy protests have been mostly peaceful, at some other Occupy sites the demonstrations have gotten foul, which Rood said only divides people. 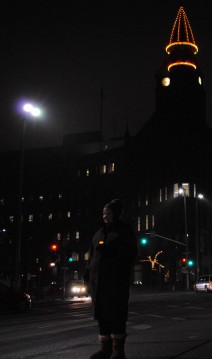 “It's easier to yell, but a true transformation comes from each individual one by one,” he said, which is why he organized the flash mob meditation. He recruited more than a dozen people from the Zen Center of Spokane, Friends of Compassion and Occupy Spokane to gather on Friday night at the triangle and meditate on how, as Gandhi said, they can be change. The meditation flash mob, as he called it, will also take place on Saturday at 7 p.m. and he urges people of all faiths to join in. “The more people that do it, the more energy it builds,” Rood said, adding that meditating amongst the sound of traffic, nearby chatter and car horns is a discipline in maintaining a peaceful mind. “The real the real practice is taking it into the world.” “Please consider joining us by taking your practice out of the temples and churches and into the marketplace,” he said in an email invitation. “The Occupy movement needs support and respect from folks from all walks of life.” Dave Gordon, also a Buddhist, drove 90 miles from Barstow to participate in Friday's flash mob meditation.

He said suffering occurs when people, like the rich and the poor, feel separated from one another. The street meditation, he said, will help unify people. “Hopefully (when people walk by) they'll feel the peacefulness of our meditations,” he said. Brad Rafford, chairman of Occupy Spokane's committee of healing, came to pray with the meditators. He said it's events like the flash mob meditation that have made the Occupy movement become less angry and more peaceful in recent weeks. Although it's winter (it was 34 degrees Friday night), and Occupy Spokane protestors aren't at the triangle daily anymore, he promises that they haven't disappeared. Updated Occupy Spokane events can be found on the group's Facebook page here. See more photos on our Flickr page here.