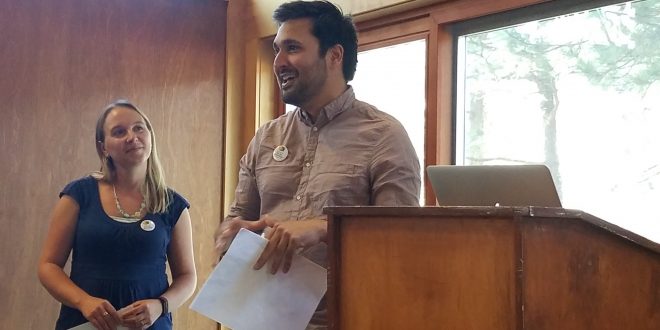 Stephanie Celt, Washington state policy coordinator at Blue Green, and Ahmed Gaya, field director of Alliance for Jobs and Clean Energy were speakers at the presentation. Photo by Matthew Kincanon

Alliance for Jobs and Clean Energy, along with FUSE and other groups, held a presentation last Sunday afternoon, June 25th, at Unitarian Universalist Church of Spokane discussing how climate change has been affecting Washington state and what can be done to change it.

Jeremy Sampson, a member of the local leadership council for FUSE Spokane and speaker at the event, said the event was inspired by President Donald Trump’s decision to pull the United States out of the Paris Climate Accord.

“We think it’s time for cities and states to take the lead on climate change policy,” Sampson said.

“We hope that people feel inspired to action and get involved,” Sampson said. “We’re going to need lots of volunteers and lots of people to give their time and energy to making this happen.”

Sampson added that it’s going to be a “people-powered campaign” where they are going to need to invest in a lot of resources, and he wants to see Spokane take the lead on progressive climate change issues.

At the beginning of the presentation, Sampson had attendees get into groups of three to introduce themselves and share their reasons for being at the event.

Brenda Day, an attendee, talked about how the “only group in the world that doesn’t believe in climate change is the Republican party of the United States.”

“And that’s a sad thing because they’re in control . . .so I think we have to get our representatives to change their minds,” Day said.

Petra Hoy, an attendee, said she thinks representatives “know better, but they don’t want to…because it seems like their argument was for a long time ‘It’s not real, it’s not human cause’ …and now it seems like they’re switching over to ‘Well, there’s nothing we can about it anyway.’ ”

During the presentation, Ahmed Gaya, field director of Alliance for Jobs and Clean Energy and speaker at the event, said he started working on climate change awareness after the 2010 Pakistan floods.

“It was kind of the first time I had this experience with my family calling home to relatives out there trying to check to make sure they were ok,” Gaya said. “That was just really the first time that the signs of climate change came really home personally for me and how it was impacting myself.”

Gaya explained how climate change for residents in Washington, who have relatives in places that are experiencing the effects of it, is not an “abstract or far off thing, it’s a very personal impact.”

Stephanie Celt, Washington state policy coordinator at Blue Green Alliance and speaker at the event, said that climate change affects everyone, but not all the same way.

“It affects us all differently depending on our jobs, on where we live, on the resources we have, how much money, our immigration status and so many other different factors,” Celt said. “And we believe that taking action on climate change will actually give us the opportunity to address a variety of different challenges as well.”

Celt added that addressing the variety of challenges will give the opportunity to create good living wage jobs, and address environmental injustices faced by low-income communities and communities of color.

“We need to remake the climate movement into a broader more diverse community with workers, low-income people of color and others in positions of leadership,” Celt said.

“Here in Washington, one of the biggest costs of global warming is to our health,” Gaya said, which includes air pollution due to wildfires, increased temperatures, and sources of emissions such as transportation and industrial pollution, and water pollution.

He discussed how the health effects of pollution and climate change is a justice issue.

“Low-income communities, communities of color and immigrant communities feel the impacts of air pollution more severely and disproportionately to other communities,” Gaya said.

He added that 40 percent of those who live around electric power generating stations are people of color.

Gaya discussed how climate change has a direct cost on Washington state’s economy.

According to Gaya, these costs include how ocean acidification threatens fisheries that could damage Washington’s shellfish industry; reduced snowpack threatens the state’s hydroelectric power system which could have a dramatic impact on energy prices; and droughts and heatwaves pose a threat to the 160,000 agriculture jobs (13 percent of Washington’s economy) where farmworkers are exposed to dangerous conditions and costed the state $336 million last year.

“These costs will get worse if we don’t take action,” Gaya said.

Celt then discussed how to take action against climate change.

According to the presentation Celt used, one of the solutions is a price on pollution where a $15 per ton fee on greenhouse gas emissions would be used to invest in an “equitable transition to a clean energy economy.”

“We need big investments in clean energy and climate mitigation to cut carbon and reduce emissions,” Celt said. “Create tens of thousands of clean energy jobs with good pay and high labor standards, and clean our air and improve the health of our communities.”

Celt added the investments will be used to make communities “more resilient in the face of global warming” through maintaining forests that are less prone to wildfires, and adapt water systems to the changing precipitation patterns.

“Hundreds of millions of dollars per year are going be available to kickstart industries or grow existing industries in clean energy companies that are going to play a huge role in reducing our emissions,” Celt said.

Celt discussed ways to create an equitable transition regarding how it affects others.

These include avoiding unintended consequences on businesses and jobs by making sure that it would not move jobs to another state or country; workers in fossil fuel reliant industries are given wage and benefit replacement, retraining and other forms of support; and create a grant structure for low-income communities to enable them to adapt to the costs of the policy.

“It’s really a chance for Washington to be a leader because the emissions reductions that we make, in terms of global warming on a global scale, they’re important and they’re part of the solution,” Celt said.

Celt added that “this model is something that other people are going be really excited about and that the impacts that we’re talking about are only going grow to the extent that Washington can help spread this model.”

Gaya said that they are planning to move this policy forward to the 2018 ballet, which is expected to be decided later this summer.

He explained that, in order to get this policy passed in the mid-term election next year, an estimated 1.7 million people are needed to vote yes on it.

“It’s a pretty big lift, but it is doable,” said Gaya.

Gaya added that the policy needs 350,000 signatures between January and June 2018 to get it on the ballot.

“To get to the place where we can win, we need a huge volunteer team out there talking to people,” Gaya said. He added that they are going to try to mobilize around 3,500 volunteers by January 2018.

The last slide of the presentation said, “It takes everyone to change everything.”

Hoy said the most important thing she got out of the event was that there is hope.

“There’s hope for Washington state and there’s a plan that I think will be equable for everyone,” Hoy said after the presentation.

Over 20 people attended the event.

Previous Unitarian Universalists elect first woman president
Next Ask an Eastern Orthodox Christian: How do I address an exarch from Turkey or Greece?

The head of the Federal Election Commission chastised Catholic bishops during a pair of interviews this week, accusing church hierarchy of “hiding behind” their nonprofit status and declaring that this year’s U.S. election amounts to a “spiritual war” that threatens the country’s “Christian moral principles.”