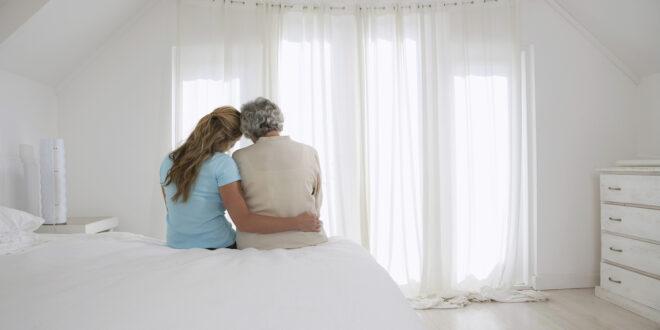 Mother and Daughter Sitting on Bed / Photo by londondeposit (Depositphotos)

Grief and Loss Can Tie Us Up in Knots

Grief and Loss Can Tie Us Up in Knots

After my friend Doug died back in 2007 — abruptly, while we were working together on stage, I’ve always assumed a heart attack — I felt something like guilt or shame as I collected his personal belongings in order to return them to his family. As I touched each item and picked it up, that item ceased to be an object of one of Doug’s verbs. Taking his jacket off of the coat rack made it no longer a jacket that Doug had hung up; picking up his shoes made them no longer shoes that Doug had put down.

I had this sense that I was participating in making the world into a place that was not shaped by Doug, that would continue without him. That I was undoing the evidence of his life.

This has been a theme for me in grief and loss, the sense that moving or changing or getting rid of a loved one’s possessions is transgressive. (Maybe it is a theme for everybody. See the scene in the movie in which the deceased’s bedroom remains unchanged, a kind of shrine, months or years after their death. See Joan Didion’s refusal to give away of her late husband’s shoes — he would need them, after all, when he came back.)

I experienced it, probably most memorably and probably most absurdly, while gazing upon a box of kitty litter, loaded with our late cat’s turds, and weeping. To scoop out those turds out would be to participate in the undoing of our cat. It would be to make her more dead.

All of which brings me to this coil of rope, a rope that had been in my father’s use dating back at least to my childhood. (Polypropylene may drive you nuts with its antipathy to taking knots. But, boy, is it durable.) The other day, I needed to tie some stuff down. So, I took it off its peg in dad’s workshop, and I uncoiled it. I undid at least a couple of dad’s verbs. This will never again be a rope hung up by my father, never again a rope coiled by my father.

What shall we say about the undoing of verbs?

Well, to begin: thank you.

Thank you for the moments witnessed by these, the former objects of your verbs, for what you created with them. Thank you, in particular, for this rope. For tents lashed down; for Christmas lights and extension cords pulled up ladders; for furniture tied onto and into hatchbacks in occasional defiance of best practice. For the proud joy that is being a little boy and doing a project that needs rope with your father.

Forgive us for undoing your verbs, for the grief-soaked dailiness of picking up and uncoiling your rope (or boxing up your National Geographics or giving away your cutlery or returning your medication to the pharmacy for disposal). We are sorry. More sorry than we can say.

We are tied into knots without you.