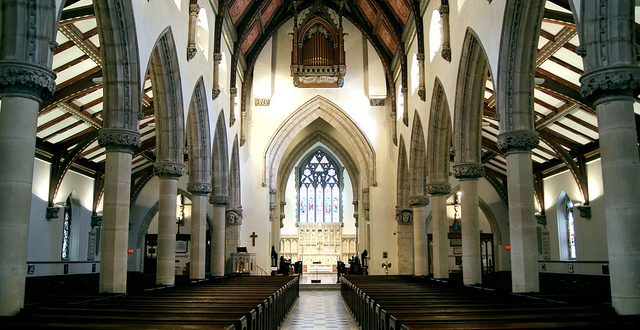 Grids, Circles, and Our Places of Worship

Grids, Circles, and Our Places of Worship

I have an artist friend who is beguiled by patterns, including grids. He creates luminous grids of lines, shapes, colors, and numbers.  For those who have eyes to see they resonate with esoteric spiritual implications.

Grids make me nervous, give me headaches. They box me in. I want to escape.

I prefer messes. Blame it on my hometown, Boston, whose old downtown grew long before cars when their promoters demanded straight streets. Thus its streets followed the contours of the sea coast, river banks, hills, and forest edge. The resulting mesh was and is delightfully confusing. No one can drive straight in Boston. Ask any visitor.

The first big grid I experienced was New York City. Sure, it was hard to get lost (just follow the numbers), but where was the fun in that?  I found the regularity frightening and oppressive. I discovered that I couldn’t even safely jay-walk, a communal sport in Boston. In the Big Apple, people actually followed pedestrian and traffic rules.

All very intentional, very controlled. The narrator of Dostoyevsky’s Notes on the Underground claims that he is driven crazy bythe intentionality of St. Petersburg, Russian’s first planned city. Somewhat crazy myself, I fully sympathize with him.

When I moved out West, I discovered that many cities, unfortunately, were planned. I turned down a good job in Salt Lake City because I was put up in a motel near Temple Square. I have nothing against the Latter Day Saints, but save me from a gridded Zion.

Now I live in comfortable Moscow. Yes, there are a few parallels and crisscrosses, but not so many as to be too dispiriting. When I first visited Spokane, I was depressed by all its straight and clean streets. I have since found some curves and some messes, so I’m happier with this Heart of the Inland Empire.

My artist friend claims that his grids evoke and trace those found in nature. Maybe, but I’m prone to agree with Black Elk. After he and his people had been forced to live in box-like houses on the Pine Ridge reservation, he observed that nature favors the circle: “Everything the Power of the World does is done in circles. The sky is round, and I have heard that the earth is round like a ball, and so are all the stars. The wind, in its greatest power, whirls.  The birds make their nests in circles, for theirs is the same religion as ours” (“Black Elk Speaks,” as told through John G. Neihardt [1932]).

When Black Elk spoke these words he not only practiced the circle-centered religion of birds and of his tribe. He was a devout Catholic as well as a holy man of the Oglala Sioux. Thus he knew of the cross, the imperial grid upon which Jesus was crucified.

Medieval European Christians put this grid at the center of their cathedrals. This was the cross-road of their cross-shaped houses of worship, which were often adorned with round rose windows. Perhaps for spiritual as well as aesthetic purposes, a circle and a grid balance each other, sort of like Yin and Yang.

Most early American Protestant churches had a simpler design: a square or rectangular structure with straight rows of pews looking up to an altar and a pulpit from whence spoke the male voice of religious authority; no Yin allowed here. In the 19th century, when women wished to challenge male authority, they organized conversation circles.

The old Swedish Lutheran Church in Moscow is beautiful, but pretty boxy. The Unitarians who now worship there have made it even more beautiful through quilts depicting the rolling hills of the Palouse and a round stained glass window.

My artist friend and I worship in Emmanuel Lutheran Church, a modern structure.  We commune around a circular altar, and look up at a cross.  So while I still enjoy messes, I have to acknowledge that both the grid and the circle can play a sacred role in our lives.

Previous A Nativity Set for Christmas
Next Kyle Rittenhouse, whiteness, and a divinely ordained license to kill