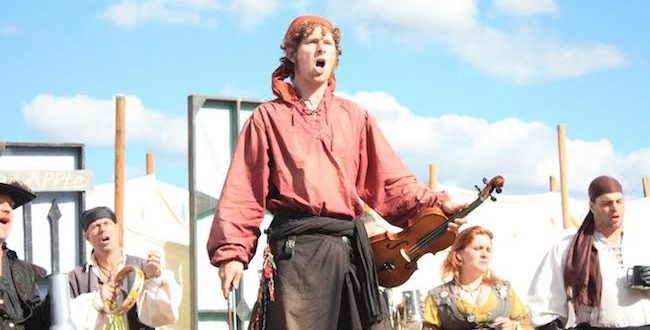 The first weekend in October, Spokane held its annual Renaissance Faire at Green Bluff, transforming the area into a festival taken straight out of the 1400’s. The Ren Faire partnered with 2nd Harvest and raised money to help the charity feed low-income families in the area.

The Faire offered a wide range of activities for lords and ladies of all ages. A plethora of shops and merchants offered a variety of Renaissance-themed products including swords, armor, puppets and even a “goblin’s ear” belt pouch. Additionally, people participated in activities such as scavenger hunts, archery with live targets and marching demonstrations.

“Probably one of the most favorite attractions…was Wotan, our Fairy Smasher,” Lena Cooley, Faire director said. “He’s a 6’8” barbarian who is allergic to kisses. And he goes around and he is really cool because he lets the kids be the heroes. He has a big, giant net and tries to catch all the fairies, and the kids rescue the fairies. So it’s really interactive.”

Cooley started the Ren Faire in 2011 and it has been growing ever since. The Faire’s first year brought in about 250 people. Last year, the number grew to about 4,300, Cooley said.

The Faire started with the help of the Spokane Entertainer’s Guild, she said. The Guild travel around Spokane and help promote non-profit organizations.

The Faire has connected itself with charities and nonprofits in multiple ways. The Faire itself donates a percentage of every ticket sale to 2nd Harvest. How much money the event raised for 2nd Harvest is still being calculated.

Additionally, individual acts and performers can encourage people to help them donate to other charities. The Brotherhood of Oceanic Mercenaries (BOOM) offered cannon demonstrations and history lessons on pirates while simultaneously raising money for the Wounded Warriors Project.

Another aspect of the Faire that is made a priority is the accessibility and interactiveness of the Faire.

“I think it’s the personal interactions that we make with the patrons and you never really know who it’s going to touch or how it touches somebody,” Cooley said.

“Some of the best parts is that sense of wonder for somebody who sticks out or doesn’t fit in or something like that, they feel accepted and they feel welcomed,” Alyssa Young, member of Seven Meadows Archery said. “That’s a huge boost for everyone involved.”

View All Posts
Previous The slaughter of you and me
Next Beef stew and white supremacy: The weird demimonde of #TradWife