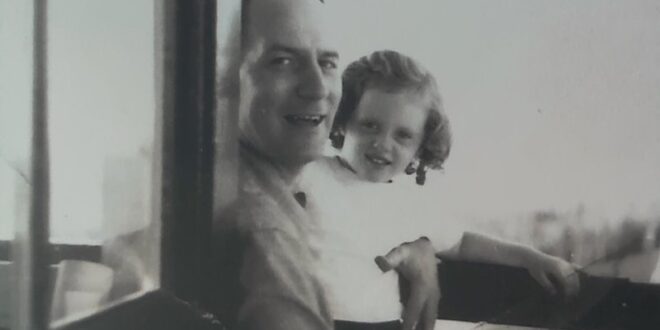 Clarice Wilsey and her father, in an image from the dust jacket of Wilsey's book "Letters from Dachau: A Father’s Witness of War, a Daughter’s Dream of Peace" / Contributed

Captain David Wilsey, M.D., was one of the 27 doctors who entered the Dachau concentration camp during the liberation, risking their lives to treat 30,000 survivors experiencing malnutrition, deadly diseases and torture.

His family knew little about his wartime experience. It was not until 2009 when they were cleaning their home following his death that they discovered letters to his wife, Emily, detailing his experiences in the camp.

He urged his wife to “tell thousands so that millions will know what Dachau is and never forget the name of Dachau.” The 280+ letters survived several moves and even a house fire.

Clarice embraces her responsibility to give voice to the message her father was unable to share after his experience.

She is a member of the Holocaust Center for Humanity Speaker’s Bureau and is affiliated with the U.S. Holocaust Memorial Museum. Her book, “Letters from Dachau: A Father’s Witness of War, a Daughter’s Dream of Peace” was published in 2020.

She will speak from 10 – 11 a.m. in Room 314 of Hemmingson Center. Following her talk, there will be a guided tour of the “Americans and the Holocaust” exhibit in the Foley Library.

Admission is free and open to all. Parking is available in the BARC (where the Zag Shop is located) and can be accessed from either Boone or Desmet Ave., one-half block west of Hamilton St.