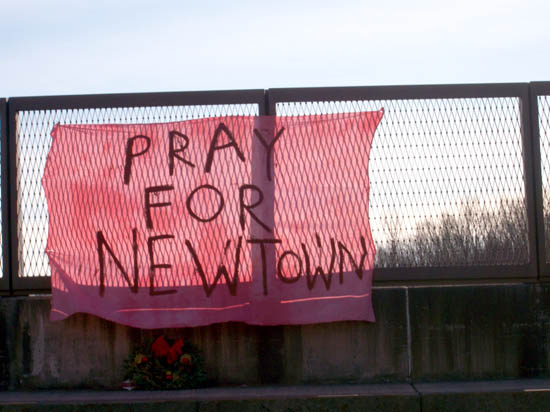 Gratitude amid the memories of carnage

It’s been slightly more than two years since the massacre at Sandy Hook Elementary School in Newtown, Conn. I didn’t lose a loved one that day, but it was almost as if I did.

Lauren Rousseau, a teacher who died there, was the daughter of friends I know well from my career at two Connecticut newspapers. I was at the hospital the day she was born and I had the privilege of proclaiming the good news to my friends in the newsroom. Her stepfather, another close friend, was one of the first journalists to arrive at Sandy Hook, although he was mercifully relieved of work responsibilities when it became clear that Lauren was among the victims.

The pain felt every day by the families and all the town’s residents is not something you simply get over. An article in the daily newspaper that’s closest to Newtown said their pain can worsen as the years pass. That was clearly evident a week earlier in a story about how the first responders are coping. A 53-year-old EMT said, “Before Sandy Hook, I looked at the world as a good place where bad things happened. Now, I look at the world as a bad place where good things happen.”

There are moments when I am tempted to embrace that point of view. Eight Christmases ago I was halfway through a divorce proceeding. Six Decembers ago I was blindsided when I was laid off from the best job I’d ever had, eventually forcing me to retire. Two years after Sandy Hook, many Americans still suffer amid a weak economy fueled by corporate and personal greed, and millions of innocents suffer amid a host of wars.

But I won’t give in to that kind of thinking. In the wake of all these tragedies, great and small, my view of Christmas has changed because I remember Romans 5:20, “Where sin increased, grace increased all the more.” I now look at Christmas as a time when grace has abounded, and at some point certainly will abound even more and overcome grief, sadness and pain.

I don’t minimize the reality or necessity of grief. I occasionally grieve over the suffering that Lauren’s family and my other friends in Newtown still endure. But grace has already been poured out on Newtown, and I anticipate and ask for even more of it, which turns my sadness to hope.

A priest-friend of mine said recently that Jesus came into our sad world to redeem it, one person at a time. I now rejoice in the redemptive work He has done in my life. As I look back on His work in me since my divorce and layoff I realize I’m in the best place I’ve ever been in. I cling to the truth about the power of God’s grace not only because of what his grace has done for me but because it bolsters my belief that this same grace will work miracles for others.

For me, Advent is now the annual time of anticipating the extraordinary blessings that God will pour into the hearts of all those who feel so much pain at this time of year. And that’s a lot more people than those affected by the carnage in Newtown.

Even before Christmas arrives my anticipation fuels joy and that joy inspires gratitude. And that’s where all our hearts should be at this time of year.

Thanks for writing about this Mark. Several of my journalist friends from CT were also there that day. It’s important to remember what happened, and try to find meaning in it.