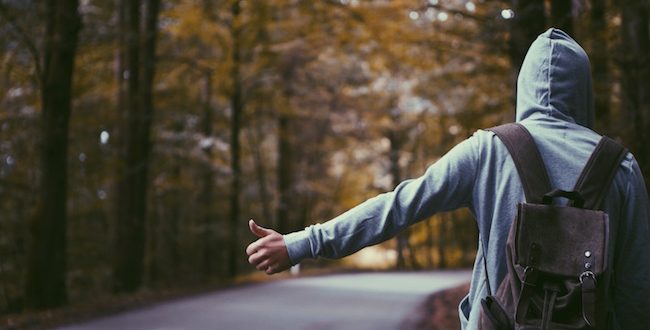 Grateful for the Kindness of Strangers

My husband and I were traveling to Utah for a spring break camping trip.  It was approaching dusk, and we were heading south on Interstate 15 to our first campsite in northern Utah.  Suddenly, our 2000 4Runner started sputtering, and we realized that our gas gauge had gotten stuck and we were on empty.  With not a Chevron station in sight, we forced our vehicle (which was pulling a pop-up camper) to go as far as it possibly could, eventually pulling over to the side of the road.

If I had known at that moment that we were 30 miles from a gas station, I might have freaked out a little, given that we had no cell service.  Instead, we just started walking, hugging the shoulder as semis whizzed by, but daring to step into the road with our thumbs up when passenger cars approached. Within 5 minutes a gentleman by the name of Paul stopped.  He was driving home from working the oil fields in North Dakota. He cleared his belongings out of his pickup cab and we slid in.  He took us to the next station, insisted on buying our gas (“it’s a business expenses, haha!”), drove us the 30 miles back to our SUV and camper (which was now enveloped in darkness) stayed with us until we got her going again, and followed us to make sure we made it to the station to fill up our tank.

During the hour-and-a-half we spent with Paul, we learned about his work in North Dakota, hid kids and grandkids, and his plans for Easter.  He was convinced that it was “meant to be” that he took Interstate 15 instead of another route he usually takes, because if he hadn’t he wouldn’t have had the opportunity to help us.  I like to think that there are lots of Pauls out there, and if he hadn’t stopped by someone else would have.  But I believe he was focused more on the opportunity he had to help rather than the likelihood that we would have been helped.

Paul didn’t have to stop.  He was at the end of a long journey home, and could have easily justified passing us by.  But he did, and it shaped the rest of our camping trip.  Not only did we keep a sharp eye on our gas gauge, we also kept a lookout for others in similar need.  On Hwy 95 in southern Utah, a young backpacker waved us down in the middle of nowhere.  He was just looking for someone to take an empty plastic bucket his food cache had been left in so that it wouldn’t litter the amazing landscape (if you have not travelled this road, put it on your bucket list or Google it).  It was a small act compared to what Paul had done for us, but it freed him up to continue his own journey.

It is so easy for us to hide in our metal boxes as we speedily pass people in need.  “Someone else will stop” we think to ourselves.  And while I think that may very well be true, by doing so we miss the opportunity to offer an act of kindness.  Only at the end of our time with Paul did we remember a similar experience when we were on the other side of the helping equation.  A couple from Guadalupe, who spoke mostly French, had accidentally locked their keys and phone in their rental car at a pull-out in Yosemite.  While (despite our best efforts) we were unable to break into their car, we did take them to the nearest store where the owner called the ranger to come and help them.

Acts of kindness from others can certainly save the day, but they can also lift our spirits, whether we are the helper or the helpee.  It reminds us we are not the independent, self-sufficient souls we unquestioningly strive to be, but rather that we depend on one another, sometimes in the form of kindness from strangers.

Tags acts of kindness helping others