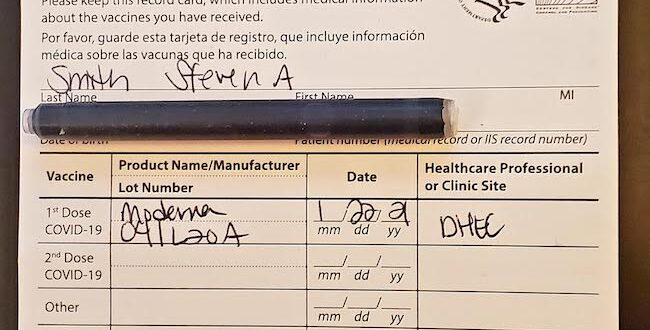 I got my shot.

Late last week, at the Deaconess Health Education Center, a nurse volunteer administered the first dose of the Moderna vaccine that will eventually protect me, mostly, from COVID 19.

It was an emotional moment, surprisingly. I tend to be stoic in the face of medical issues. But this was different.

Like most of you, I have been quarantined since early last year. March 13 was the last day I taught an in-person class at the University of Idaho.

I have visited a few close friends experiencing their own health issues and even more isolated than me. But that has been it. My wife, Carla, has been running our necessary errands even as she mostly works from home.

As the weeks have dragged on, from mid-March to now, it seems as if I have forgotten what a normal life might look like. I have not given up, to be sure. But the isolation does take a toll, as I am certain most everyone reading this column can agree.

And then comes the vaccine, two variations actually, Moderna and Pfizer, with another one or two pending.

Rightly, the first delivery phase involved front-line medical personnel and first responders. The vaccination process has seemed smooth enough here in Washington, but there were reports of near riots in other parts of the country. Not surprisingly, there also were reports of people with the means attempting to buy their way to the front of the line, of people lying about their eligibility, of people even stealing supplies for black-market delivery.

Like everyone else, I yearned for the promised protection and the possibility of some sort of return to normalcy. But I promised myself I would not join the panic, that I would wait my turn.

Following CDC guidelines, on Jan. 19 the state of Washington expanded the eligibility pool to include people like me – 65 years old or older. Also eligible are people 50 or older who live in a multi-generational household. My wife, who works for a medical services provider, will receive her vaccination on Feb. 1.

For those of us in the general population, gaining eligibility is only the first step in obtaining that promised protection.

I first contacted my primary care physician to see if his office, part of a large, multi-state medical corporation, would be offering the vaccine. No. He told me to contact my pharmacy. But I go to a small local chain and the pharmacist told me they were too small to qualify as a provider. She suggested Walgreens or RiteAid or Safeway, the last seeming a bit out of left field. She said I should check their websites for information.

I went to sites for all three. Yes, they would be offering the vaccine, but later. Those websites sent me to the Spokane Regional Health District website.

I went. They confirmed the eligibility requirements, suggested I check with providers, such as Walgreens or Safeway, and suggested I watch those spaces for more details.

You get the idea.

Finally, I contacted the insurance company that provides my supplemental drug coverage. No, they did not have any details about local availability. But a woman named “Audrey” at the company’s national call center said she had just learned of a website in Washington that might be helpful – findyourphasewa.org. Go there she said.

So, I did. The site presents a simple questionnaire and asks you to respond honestly to the questions. When I pushed the submit button, I was given a confirmation of eligibility and told to print it out as proof when going for my shot. And I was given the opportunity to sign up for email alerts on vaccine availability. Easy. Took less than five minutes.

Amazingly, within an hour, I received a notification that sites in the state were scheduling appointments and was directed to yet another website where I could find a local provider and schedule an appointment.

In minutes, I was done. That was on Monday last week. My appointment was for Friday morning. Friends from all over the country were reporting problems. Some had been able to make appointments only to have them cancelled because supplies ran out. Even friends on Washington’s West side were frustrated by lack of availability, unable to even make appointments.

I was certain my appointment would be cancelled, too, especially after a midweek story in The Spokesman-Review reported local supplies were dwindling. But there was no cancellation and so, Friday morning, I reported to the DHEC for my shot.

The system was well-coordinated and, to be frank, designed to send away walk-ins. Appointments are mandatory, as are masks.

There were a couple of check-in stations, one form to fill out, then a short wait in a short line. The large vaccination room seemed capable of handling dozens of people at a time. I was in the room about 15 minutes before a volunteer nurse delivered the vaccine, the shot itself no worse than a routine flu injection. After a mandatory 15-minute waiting period – to see if I had any side effects – I was free to go. The entire process took just a bit more than an hour.

And, huzzah, while waiting to leave, I was able to use my phone to schedule an appointment for my second dose.

My volunteer nurse explained that the vaccine is considered 65% effective within a week of the first dose, 95% effective after the second. By the end of February, I will be about as well protected from COVID as is currently possible. My wife will be fully protected by mid-March.

I did not cry as my first dose was administered, but I came close. I saw quite a few others who did break down a bit.

All of us have been bottling up pandemic-caused stress whether we realize it or not, coping every day as best we can. There is something about that painless little shot in the arm that bleeds off some of that stress in the very moment the needle penetrates the skin. The air goes out, the release as physical as it is mental.

Of course, we cannot kid ourselves. It will take months for the vaccine to reach all those who want it. And for the foreseeable future, all of us, vaccine or no, will have to continue wearing masks and practicing social distancing. If there is a new normal, we will not see it until later this year, maybe in the fall.

Looking forward to the little things, who would not get a bit emotional.

Previous Two Jesus Followers Who Are Worlds Apart Choose to Speak for Sanctity of Life Despite COVID Restrictions
Next Ask An Evangelical: Living Out Faith in Daily Life