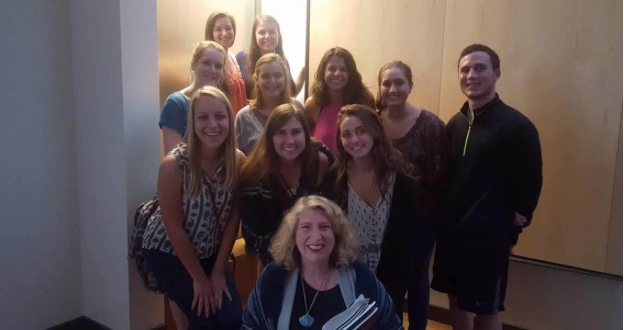 Gonzaga’s Jewish Bulldogs club is a growing presence on campus

When most Spokanites think of Gonzaga University, what comes to mind is probably basketball, law school, and the Jesuit tradition. What they aren’t likely to think of is Judaism. Yet for several years, Gonzaga has had an official Jewish student club, the Jewish Bulldogs. To learn more about this unique group, I recently spoke with its faculty adviser, Rabbi Dr. Elizabeth Goldstein, an assistant professor in Gonzaga’s religious studies department; the club’s president, Zina Zimmerman; and Michelle Wheatley, director of University Ministry.

According to Goldstein, who is entering her seventh year at Gonzaga, the Jewish Bulldogs have received support from several organizations within the school, including the Center for Global Engagement and University Ministry. (The latter serves as the club’s parent organization.) The club organizes numerous programs every year, including a Passover Seder, a speaker for Yom HaShoah (Holocaust Remembrance Day), a table with apples and honey for students to sample at Rosh Hashanah, and an annual Chanukah party. The Jewish Bulldogs have hosted hamantaschen- and challah-making workshops as well. Since all recognized Gonzaga clubs must have a community service component, the Jewish Bulldogs donate baked goods to local senior centers.

This year the club will host a monthly Friday night Shabbat service, led by Goldstein, in the Hemmingson Center’s reflection room. The group is also planning a four-week trip to Israel next spring, for which students can earn six academic credits.

Goldstein said the club began as a small group of students who felt the need for Jewish community on campus. She explained that Jewish faculty members Vickie Williams and Larry Weiser had organized some Jewish events within the law school, where Williams still teaches. (Weiser retired last year.) However, there was no official Jewish organization for undergraduates. Goldstein said many Jewish high schoolers who visit Gonzaga as prospective students want to know that Jewish life exists there. “Jews want to go to Gonzaga, they really do,” she said. “It’s a good liberal arts school, it’s pretty.” But when Jewish families come to campus, “they want to find that it’s okay to be Jewish at GU.”

To address this concern, the Jewish Bulldogs introduce Jewish prospective students and their families to current Jewish students who can give them a sense of life on campus. Since joining the faculty, Goldstein has tried to make Gonzaga as Jewishly welcoming as a school with such a small Jewish population can be. Last year during Sukkot she invited students to the sukkah at her house. She said a campus sukkah is a potential future project for the Jewish Bulldogs.

So how many Jews actually attend Gonzaga? Goldstein estimates 25-30 undergraduates who self-identify as Jewish at any given time, out of the school’s roughly 4,000 undergraduates. She said a core group of between five and 15 regularly attend events. (The club’s official webpage says it has 22 members.) Non-Jewish students are also welcome to attend, and they frequently do.

Jewish students’ engagement with the community can extend beyond campus. Both Temple Beth Shalom and Congregation Emanu-El offer low membership rates for students. In addition, TBS sometimes employs Jewish undergrads in its Hebrew school, and Jewish students often carpool to Shabbat or holiday services at the temple.

Goldstein said Jewish students at Gonzaga often want to serve as a resource to teach non-Jews about Judaism. She mentioned that by introducing humor into the annual Seder, the Jewish Bulldogs have been able to show non-Jewish students the fun, free-wheeling side of Jewish tradition. Goldstein added that Rebecca Marquis, a member of the Jewish community and an associate professor in Gonzaga’s modern languages department, is also supportive of the group and attends events when she can.

Zina Zimmerman, the club’s new president, came to Gonzaga three years ago as a transfer student. She arrived just as the Jewish Bulldogs became a recognized student organization. Zimmerman told me that even though the core membership is small, it’s definitely growing. Event attendance is on the rise as well. Zimmerman said the club expected no more than 80 people to attend their Seder last year, but closer to 100 showed up.

Zimmerman said the typical Jewish Bulldogs event is “more of a social gathering than a religious gathering.” She added that for her, the organization provides a “support system from Jewish friends that I really needed in college.” That’s something she didn’t find at her previous school. “I went to University of Portland my freshman year, and there was no Jewish presence there at all,” she said. “I wasn’t myself, because there was no Jewish presence.” Needless to say, Zimmerman was thrilled to discover Gonzaga’s club. “In my academic life I had nothing until I discovered Jewish Bulldogs,” she said. “Judaism for me has truly been the stable factor no matter where I go.”

Zimmerman suspects there are Jewish students on campus who might take an interest in the club if they knew about it. She grew up in Spokane and therefore has many connections within the Jewish community, which should help her engage in effective outreach. She echoed what Goldstein told me, which is that University Ministry has been a key ally. “They are very accepting of every religion on campus,” she said. “When they heard a Jewish club was popping up, they were very supportive and they didn’t hesitate to give us funding and a place to work.”

In an email exchange, University Ministry Director Michelle Wheatley explained how her department has been supportive of the Jewish Bulldogs.

“Part of our goal in helping to establish Jewish Bulldogs as an official club and affiliate of our department was to open doors for structured support and resources through the university—things like access to meeting space on campus, marketing opportunities, financial resources, etc.,” she wrote. “This is in line with our department’s mission to provide opportunities for faith development for students from a variety of backgrounds.”

She added that University Ministry plans to assist the club in facilitating interfaith dialogue on campus and developing Jewish programs on an ongoing basis.

So what’s on the agenda for the Jewish Bulldogs this year?

“I think a big focus this year is going to be events,” Zimmerman said. “We have in the past had events where we don’t have enough of the club ‘elders’ to attend, so we’ve had to cancel. My goal is to consistently have one event a month.”

She added that she thinks the monthly Shabbat service, which will occur in addition to a monthly social event, can be a path to raising awareness that the club exists.