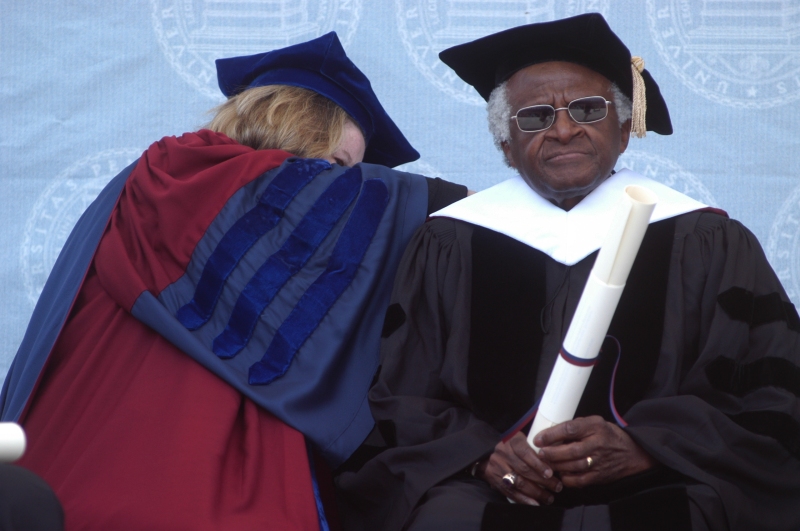 Gonzaga University made national headlines last week after protestors submitted a petition to the school, claiming the institution had lost sight of its Catholic values by inviting Archbishop Desmond Tutu to speak at next month’s commencement, where he will be presented with an honorary Doctor of Laws degree.

Now a second petition is circulating, this one protesting the anti-Tutu petition.

“For some time now the religious right, and Catholic right in particular, has been succeeding in creating these ridiculous controversies around who speaks on Catholic college campuses,” said Michael Sherrard, director of Faithful America.

The original petition, spearheaded by local attorney Patrick Kirby, declares Tutu an inappropriate choice because he is pro-abortion rights, has made offensive statements toward Jews, and supports contraception and the ordination of gay clergy.

In response, Faithful America launched its own petition urging Gonzaga administrators not to back down. Within 48 hours the petition gained 11,000 signatures, including many from Spokane.

Gonzaga President Thayne McCulloh said the university would continue with commencement as planned, explaining interfaith dialog is an expression of the school’s values.

“We are very much looking forward to having him,” he said. “I really believe that this is very consistent with what both the church and Jesuits want for its institutions; and of course in any community people will have different points of view around that. But we believe what’s most important here is celebrating the achievements of our graduates and faculty.”

In the Faithful America petition Beth Weller, of Spokane Valley, wrote, “As a Gonzaga alumni I encourage you to continue with your plan to have Archbishop Desmond Tutu as your commencement speaker this year. To ban such a man who speaks for peace and justice in this world would be a slight to what the gospel is about.”

Sherrard said the support Faithful America’s appeal has received is evidence that most people of faith want to engage in an open discussion and honor social justice leaders.

“I think the message Tutu could bring is the message that’s been his public life in ministry for decades, a message of peace and justice and human rights and reconciliation — all the things he’s stood for as a Christian,” Sherrard said. “He’s one of the greatest religious leaders of the 20th and 21st centuries. The only thing that’s confusing about this is why anyone would say he’s not an appropriate person to be speaking before college graduates.”

McCulloh said the archbishop is an example to all Christians, particularly for his work fighting apartheid. He said during the anti-apartheid movement in the 1980s and 90s Gonzaga helped bring awareness to the issue by divesting itself from companies that did business in South Africa and by discussing the issue openly with the community.

“We’re not just simply choosing somebody who people know,” McCulloh said, adding the university’s values correlate with Tutu’s when it comes to non-violent activism, ministry peace and social justice.

“Desmond Tutu’s life has been dedicated to advancing the cause of peace through reconciliation, and justice through Jesus’ own instruction: ‘ … love one another.  As I have loved you, so you also should love one another’ (John 13:34). His determination and courage during a period of hate and injustice had a transformational impact on a nation, on humanity and on our university community — and it is this that we will together celebrate as we welcome Archbishop Emeritus Tutu to Gonzaga University on Commencement Weekend,” McCulloh wrote in a letter to students.

Gonzaga’s undergraduate commencement will be May 13 at Spokane Veterans Memorial Arena.

Tracy Simmons is the editor of SpokaneFAVS. She can be reached at tracysimmons@spokanefavs.com or on Twittter @SpokaneFAVS.

Previous Do you believe in Heaven?
Next What Mitt Romney may or may not believe about America