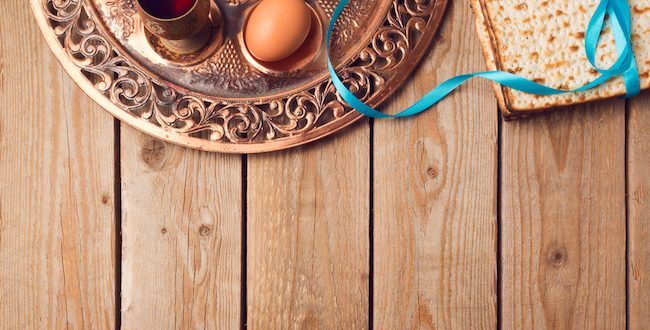 Rabbi Elizabeth Goldstein, an associate professor in religious studies at Gonzaga University, and the Jewish Bulldogs hosted a Passover Seder Wednesday night at the Globe room in Cataldo Hall where attendees not only received a meal, but also a lesson on it, its traditions and what each food and practice symbolized as people engaged in discussion and song.

“We are so grateful to all of you for coming and being open to learning and supporting Jewish cultural and religious experiences here at GU,” Goldstein said at the beginning.

The goal of a Seder, according to Goldstein, is to “move through our order of a service in order to do a number of important things.”

She added that the most important thing about the Seder is to honor a commandment from the Torah which states that, “you should teach your children, or you should tell your children, or explain to them what it was that God saved the people of Israel from their oppression as slaves in Egypt.  That God took them out with a mighty hand and an outstretched arm and sent them out into the world to fulfill a divine purpose and a divine promise.”

In front of each attendee was a Seder plate, a plate of food with each one playing a symbolic role in the event.  The food included parsley (Karpas), a hard-boiled egg (Beitzah), a small bowl of chopped apples, walnuts and grape juice (Charoset), and horseradish (Maror).  Also, there was a small bowl of salt water for each guest, as well as two glasses; one for water and the other for grape juice, even though the Seder would usually use wine.

The Seder began with the Kiddush, where a blessing was said over the first cup of wine, which was followed-up with a second blessing that, Goldstein said, “acknowledges that we’ve made it through another year and that we’re so grateful to make it to the season at this time.”

Throughout the ritual, the story of Passover was told along with the Seder’s traditions which included the washing of the hands, dipping the parsley into the salt water, breaking the matzah placed in the middle of the table, setting one piece of the matzah aside as the Afikomen (the dessert matzah that’s eaten after the meal), the four questions, the story of the four children, the singing of “Dayenu,” blessing the Matzah and Marmor, eating a sandwich of Matzah and Marmor, eating the Afikomen and other traditions.

After members of the Jewish Bulldogs sang the four questions, attendees were given notecards and pens to ask other questions they have about the Seder, Passover and Judaism which were later collected.

When it came to the story of the four children, attendees were taught about the four ways children might react to Passover and the questions they have.

According to the Haggadah book provided to attendees, the answers include explaining the laws and customs of Passover, celebrating how Adonai freed the Israelites from slavery and remembering what Adonai did for them once they were out of Egypt.

During the portion where the story of Moses and the 10 plagues was being told, attendees dipped their pinkies into the grape juice and left 10 drops on their Seder plate to represent each plague.

Goldstein said this was to “remember and to feel compassionate for those who suffered at the hands of our redemption.”

At several points during the ritual, attendees were taught about the multiple meanings that the Karpas, Charoset and other items present symbolized, and each table read through small cards given to them and decided which ones they liked the most.

At one point after the meal, attendees were invited to discuss what places they should be directing their energy and awareness toward.  People’s ideas included gun and gang violence in the U.S., events occurring in Ghana as well as Israel and other Middle Eastern countries where conflicts are currently unfolding.

During the event, a piece of the Afikomen was hidden in the Globe room for attendees to find.  Goldstein explained that children are supposed to look for it and the winner gets a prize.

The event ended with everyone at the event singing “The Ballad of the Four Sons.”

Holly Schwartz, a senior at GU and president of the Jewish Bulldogs, said that bringing the Jewish tradition to the Gonzaga community was important because most of GU’s students and faculty do not know much about Judaism.  She added that the event was a way for them to know what the religion is about.

“I want people to know the Jewish tradition here at Gonzaga and I just want them to take away that they are important traditions,” Schwartz said. “And that there’s so much meaning in Passover or any of the Jewish holidays. . .it connects so much to Catholicism as well because it is the same type of history, it’s the Old Testament, and this way people can understand that we come from the same line.”

Goldstein became the Jewish chaplain at University Ministry this year at GU and provides Jewish experiences on campus, ministers to Jewish students and provides interfaith context.