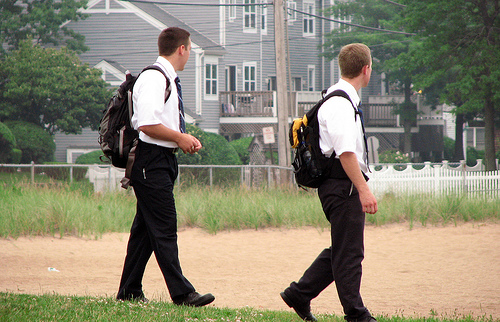 Going on a Mormon mission

By the time you read this, I will be on a Mormon mission! I won’t be able to write for the website during that time due to the strict lifestyle missionaries are required to have, including no Internet! I will really miss it. Thanks for the good times, SpokaneFAVS!

I’ve volunteered to serve a full-time proselytizing mission. I was asked to serve in the Colorado Springs mission. This mission area includes the east side of Colorado state, a large chunk of neighboring Kansas, and bits of nearby Oklahoma and New Mexico. Missionaries change which spot in their mission they are working and living in up to every six weeks, so I could start out in Colorado and later be in Kansas, for example, over the course of my mission. You know the kids on bikes with black name tags and backpacks, always in twos? That will be me, in Colorado.

There are hundreds of mission areas around the world. Missionaries don’t choose where they go when they volunteer to serve, someone high in church leadership selects the destination for each missionary, through prayerful “personal revelation,” or the holy spirit telling them which is the best place for each missionary. It is very exciting to learn where you have been asked to serve.

I will spend three weeks in the missionary training center, or MTC, in Provo, Utah, before I journey to Colorado.  I will be there with thousands of other young men and women, some staying for as long as 12 weeks if they are learning a difficult language.  I will be instructed on how to teach people basic lessons about Christ and our church and invite them to God.

Virtually all young men who are active in the church go on two year missions at age 19, as they are asked to do. Women often also decide to serve, and leave at age 21 or older, and serve for a year and a half.  We have more than 55,000 full-time missionaries around the world right now, but that number includes older married couples who serve missions together.  Missions include a strict lifestyle including hours of scripture study, and no Internet or TV.  It’s all very orderly and structured, with record keeping, and reporting back to authority.  We can call home only twice a year, and otherwise have contact with friends and family through letters and weekly emails only. After contact is made with people interested in Mormonism, missionaries ask to visit their homes to teach them a series of basic lessons on Mormonism and invite them to baptism. And yes, missionaries knock on doors to find people to teach, when other resources for finding interested people have been exhausted. And they have amazing success, the church grows rapidly!

Going on a mission is a very common thing amongst Mormons, but always considered very exciting and important. Every missionary comes back on a high, saying it was the most worthwhile experience of their life. They talk of constant intense spiritual experiences, the incredible joy of helping the people who they taught, and of their own enormous personal growth and maturation on the mission. Usually they have many “meant to be” feelings. Practically everyone I know from church who I’ve seen since deciding to go on a mission, has approached me to congratulate me, hug me, encourage me and tell me I will do a good job, a few have even slipped me cash! They are so happy for me, and can’t wait to hear about my mission.

I have a few cousins, one sister, and countless friends who served missions before me. They have offered advice and encouragement. My cousin served in New York City, it was assigned as a Spanish speaking mission, so that he could teach the Spanish speaking residents of New York City as well. Two friends have served in Japan. I go into the MTC the same day as my 19-year old male cousin, who was called to serve in Panama.

Missionary work is something that is supported by tithing from members of the church around the world, but missionaries pay their own living expenses.  My parents hoped their children would serve missions, and have saved so they could pay for my mission the same way they saved in hopes to help me and my siblings with college. I decided a mission was right for me through prayer, and consider myself extremely blessed to have this wonderful opportunity. As all missionaries are, I was asked to speak in church before I left. During my talk I cried as I said I knew there were people out there who didn’t know they had a savior who could help them bear their pain, and that I was grateful to be able to serve a mission to help find some of those people. It’s going to be amazing!