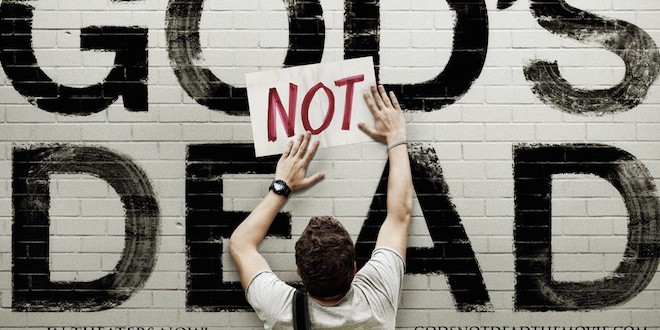 “God’s Not Dead,” but He doesn’t have much room for atheists or Muslims

“God’s Not Dead” is at least three things: a thinly veiled informercial for the Alliance Defending Freedom, a poison pen letter to atheists and Muslims, and an unusually lucrative Christian film. By grossing nearly $61 million domestically, “GND” made almost $2 million more in the U.S. than Wes Anderson’s critically lauded art flick “The Grand Budapest Hotel.” The big difference? “GND” cost a mere $2 million to make, whereas Anderson’s budget was around $31 million. A recent segment on Moody Radio speculated that “GND” and the 2014 Jesus biopic “Son of God,” among other successful faith-based features, could herald the rise of a new, more fruitful era for the Christian film industry.

The narrative of “God’s Not Dead,” like nearly every other aspect of the film, is unsubtle. Josh (Shane Harper) is a freshman at the fictitious Hadleigh University. He hasn’t been on campus long before he makes his first mistake: enrolling in an intro philosophy class taught by a staunch atheist, Professor Radisson (Kevin Sorbo — TV’s Hercules!). An upperclassman tells Josh that taking Radisson’s class as a Christian is akin to walking into the Colosseum at lion time. Ouch! (Actually, according to Keith Hopkins’ 2011 book “The Colosseum,” there’s no evidence that Christians were executed there; the Circus Maximus likely saw much more action as a martyrdom site. But whatevs.)

Josh is proud of his Christian faith, so he poo-poos the warning and heads into class. What follows is an extended philosophical battle between the godless prof and the plucky Christian student. After outlining his syllabus, the prof asks students to write the phrase “God’s dead” on a piece of paper and sign it. If everyone complies, he’ll skip the unit on theist philosophers and get right to the canny atheists (Chomsky, Russell, etc.).

In a turn of events that strains belief, Josh is the only student who refuses to carry out this deeply questionable task. His punishment: He must present a three-part defense of God’s existence in front of the entire class. Would a real professor do this in an intro class? And not face dozens of student complaints and departmental hot water? I suspect not. But hey, it’s a parable about the infringement of Christians’ right to practice their faith freely! Or something.

Although this classroom conflict is the centerpiece of the film, subplots begin emerging at an alarming rate. Josh’s wildly unsympathetic, careerist girlfriend; a kindly reverend and his African missionary pal; and the atheist prof’s beleaguered Christian wife are all secondarily important to the film’s message. Little surprised me about this movie, yet I wasn’t quite expecting the insensitivity with which it depicted a Muslim family and the bluntness with which it dehumanized nonbelievers. Which, I think, just means I haven’t seen enough evangelical movies to know the tropes.

I would have been much happier to watch a movie about Ayisha (Hadeel Sittu), a classmate of Josh’s who was raised Muslim. She wears a hijab only to please her strict father (Marco Khan). Where’s Ayisha’s mother? Not quite sure. Anyway, Ayisha’s big secret (spoiler alert!) is that she listens to Franklin Graham podcasts and Christian rock and loves Jesus. Ayisha, as one of only two significant Muslim figures in the movie, is characterized almost entirely by her burning desire to be openly Christian. The other, Ayisha’s father, is dogmatic and harsh, though to the movie’s minor credit he genuinely seems to love his daughter.

All of this might not be as offensive if it didn’t recall the trend in contemporary evangelical media of presenting Islam as an inherently violent faith and then spotlighting Muslims who have forsaken Islam and found Christ. Unfortunately, dad and daughter neatly fit this paradigm. I was naive enough, when Ayisha first appeared, to wonder if her struggles as a Muslim on campus would parallel Josh’s fight to live out his Christian faith. Yeah, no. A “God’s Not Dead” in which Islam is a valid faith option is not the propaganda piece its makers clearly needed it to be.

Then there’s the atheist contingent. Amy (Trisha LaFache) is a liberal blogger whose car, I kid you not, sports three bumper stickers: “American Humanist,” “I ♥ Evolution,” and “Meat is Murder.” Amy’s blog is extremely popular, likely because she does things like ambushing members of the “Duck Dynasty” family and informing them that hunting, like meat, is murder. The thing about Amy is — spoiler alert! — she has cancer. Her whole story seems engineered to suggest that people who don’t believe in God have no valid, sustainable source of hope, particularly when times get tough.

The other atheist characters, including Amy’s selfish, arrogant boyfriend (Dean Cain — TV’s Superman!) and Josh’s nihilist prof, are meant to bear out one of Josh’s arguments in class: Atheists have no valid, sustainable source of morality. What’s to keep them all from raping and pillaging on the daily? This tired intellectual jab joins some lesser-heard conjectures, including the statement that the Big Bang surely reflects an Intelligent Designer. Why? Because if God actually said “Let there be light,” then “one would expect” the split-second emergence of life, the universe, and everything.

One would? Josh states that believing in God doesn’t have to mean “intellectual suicide,” and I know this to be true. Some of the smartest Spokanites I know are very true believers. But the Christians in “God’s Not Dead” don’t remind me of them, because these movie Christians are black-and-white thinkers. Even the more conservative Christians I know see shades of gray.

Although the heathenish professor turns out to be a little more complicated than we initially thought, the movie’s other atheist characters are straw men built to be hurriedly dismantled by even the briefest touch o’ faith. As it turns out, all is takes for Amy to renounce a lifetime of devoted humanism is a warm ‘n’ fuzzy prayer session. By the end of that scene, I had a flashback to my recent binge-watching of the “Body Snatchers” films. Must everyone in “God’s Not Dead,” I wondered, be assimilated? During the movie’s climactic deathbed conversion scene, I had my answer.

Every film, Christian or not, has an agenda. In a way, I guess I should thank “God’s Not Dead” for putting its worldview out in the open so brazenly. What’s problematic to me is that right now, in the U.S., Muslims and atheists seem to be acceptable targets for sweeping and dehumanizing generalizations on the part of some — some — evangelicals. How about a “God’s Not Dead” featuring a sadly misguided Jew, bound for hell but saved by faith in Christ on the brink of cancer/death/veganism? Would that kind of movie lead to, say, a few protests from actual Jews? Of course it would, because it would invalidate an entire faith identity as a foolish misstep that’s easily remedied by finding Jesus.

I don’t know many Muslims personally, but I know one who is a shining example of intellect, humor, and deep, abiding faith. She doesn’t want to be Christian, yet she somehow manages to lead a life of peace and goodwill. The Bible contains a whole lot of violence, yet untold numbers of Jews and Christians go around being nice to people and bettering the planet. And guess what? So do countless atheists. By stacking the deck, “God’s Not Dead” deals itself out of the game of true philosophy. It also dooms itself to the ghettoized part of the film market where far too many Christian movies still belong.

Previous Gonzaga scholars to present “What Can We Learn From Aristotle?”
Next Catholic bishops narrowly reject a wider welcome to gays, divorced Catholics