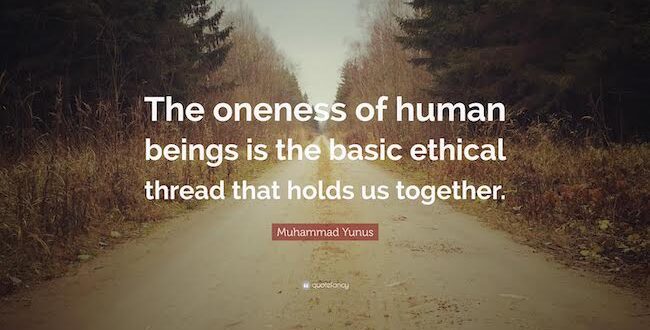 In April 2003, the Human Genome Project confirmed a biological truth anticipated by many spiritual messengers: we are one humanity, despite infinite genetic diversity. We’re sisters and brothers in one human race. This confluence of science and religion suggests a need for agreement on ethical social principles if we are to have a peaceful world.

Baha’u’llah wrote “…regard ye not one another as strangers. Ye are the fruits of one tree, and the leaves of one branch…Walk ye ‘neath the shadow of justice and truthfulness and seek ye shelter within the tabernacle of unity.”

Thirteen centuries earlier Muhammad shared a similar message: “O mankind! We created you from a single (pair) of a male and a female, and made you into nations and tribes, that ye may know each other (not that ye may despise each other).”

A traveler injured by thieves is ignored by two passersby. A Samaritan stops to tend the stranger. “Which now of these three…was neighbor unto him that fell among the thieves?” asks Christ. “He that showed mercy on him,” is the response. “Go, and do thou likewise,” replies Christ.

Two millennia later, expanding Christ’s directive, Baha’u’llah wrote, ““Deal ye one with another with the utmost love and harmony, with friendliness and fellowship.”

Echoing Muhammad, he wrote: “[T]he divers communions of the earth, and the manifold systems of religious belief, should never be allowed to foster the feelings of animosity among men.” This is, he said, “the essence of the Faith of God and His Religion. These principles and laws, these firmly established and mighty systems, have proceeded from one Source, and are the rays of one Light. That they differ one from another is to be attributed to the varying requirements of the ages in which they were promulgated.”

These “rays of one light” call to mind a rainbow, symbol of the eternal covenant between God and man. In Genesis, God describes his rainbow to Noah as a “token of the covenant which I make between me and you and every living creature that is with you, for perpetual generations: I do set my bow in the cloud, and it shall be for a token of a covenant between me and the earth.” The renewal of God’s message through his manifestations is part of that promised covenant.

The rainbow’s mystical beauty invites use as a symbol. In the 1960s, it represented attempts to unite ethnic minorities against prejudice and persecution, to acknowledge underlying unity of humanity. More recently the LGBTQ+ community embraced the symbol. Unfortunately, both attempts have sometimes led to violence.

The first rainbow flag, designed in 1978 by gay artist Gilbert Baker, portrayed the rainbow as a “natural flag from the sky.” Each stripe of Baker’s flag has its own meaning. Colors reflect “both the immense diversity and the unity of the LGBTQ community.” This rainbow of unity in diversity demonstrates a fulfillment of God’s promise. It’s not limited to any group. It represents his love for all humanity.

A chalice of pure light

What, exactly, is a rainbow? Picture a chalice of pure light scattering its myriad hues through the prisms of its crystal container. Refracted wavelengths emerge as rainbow hues according to their differing speeds. The chalice comprises the full electromagnetic spectrum; the naked eye detects only beautiful colors inseparably blended. But instruments can differentiate the wavelengths, radio to gamma waves, visible and invisible.

Now compare that spectrum with the human genome. The spectrum is defined, and thus limited, by its physical structure. The genome, a variety of DNA pairs, potentially expresses an infinitude of human characteristics.

We’re all one humanity — a human rainbow — varying infinitely in every characteristic: color, height, gender, weight, intelligence, features ad infinitum. Rather than dividing us, those differences provide social and biological richness, strength, a potential stability that natural diversity produces in ecosystems.

What divides us is fear of what we don’t understand. Racism, sexism, and other prejudices grow and develop, stoked in part by irresponsible media. These attitudes permeate our collective consciousness. We elevate ourselves by putting others down. Symbols and slogans divide the whole into exclusive subsets.

Our national motto proclaims, “E pluribus unum” — Out of many, one. Might we extend that ideal to include all faiths, all nations, all people — one God, one faith, one humankind? “Consort with all men…” Baha’u’llah wrote, ‘in a spirit of friendliness and fellowship.” What could be more logical – and hopeful?

Previous If the Public Wants Justice, Impeachment Trials Must Change
Next Loss is part of change, but so is renewal

Prejudice — You've Got To Be Taught - SpokaneFāVS

[…] God, one religion, and one human family. Within that family there must be justice, which includes recognizing equality of women and men.[v] There must also be justice and equity among the infinite varieties of color, […]

[…] Essence. This implies a single religion embracing a single humankind, breathtakingly diverse, but one in essence. These three onenesses – one God, one faith, one humankind – provide both spiritual and […]