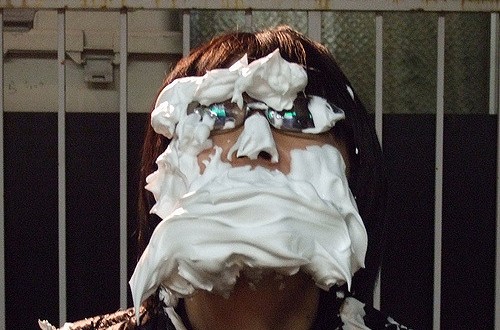 Shaving cream in the face photo by adobe tsuchiya/Flickr

What new things is God revealing to you?

Several years ago, my aunt helped out with her local church’s Awana program.  At the end of the year, she and the other leaders put on an event to celebrate their time together. One component of this celebration was one of the leaders getting several pies in the face (what kid doesn’t like seeing an adult get pied?). And, immediately after the last pie flew, the kids stormed the front of the church and began shoveling whipped cream (from every surface — including the leader’s face) into their mouths.

The kids acted on what they thought they knew even when their own experiences —the taste, for example— evidenced the contrary.

I think that it is imperative to approach faith using all of the tools available to us.  Though I am not Methodist, I appreciate John Wesley’s “quadrilateral” for theological and doctrinal development: Scripture, tradition, reason,and experience.  I love this approach because it gives weight to our experiences and our own understandings (things that are, too often, ignored or dismissed as secondary to the Bible and/or what the Church tells us).  I believe that humanity was made in the image of God, not physically, but emotionally and intellectually. And our experiences and intellect are amazing markers and guides on our faith journeys. Were we to ignore our own feelings, we would be doing ourselves a disservice and potentially missing major opportunities to learn and grow.

Thomas Merton said, “If the you of five years ago doesn’t consider the you of today a heretic, you are not growing spiritually.”

If we ignore our own experiences and intellect, we will miss out on a major part of our spiritual journeys.

In my first year in college, I took a New Testament course in which the professor presented scholarly texts that challenged me. They did not challenge me in the sense that they were difficult texts but, rather, they challenged me because they were so opposite of anything I had ever read before (or been taught in church).  To start, I learned that the Gospels were oral histories for a long time before being written down at all. Additionally, there were scholars who contended that there were passages in the Bible (as it stands today) that were added long after the First Century by scribes who were trying to make the Bible more consistent with itself.

My response was not terribly positive. I argued with my professor in the middle of class on numerous occasions. Sure, she had a PhD, but I was reading the Bible. Needless to say, I had no real basis for my arguments and my professor consistently dismantled my arguments.

As it happened, I read Romans one week and 1 Thessalonians the following week. Romans 1:16 reads, “For I am not ashamed of the Gospel; it is the power of God for salvation to everyone who has faith, to the Jew first and also to the Greek.”  1 Thessalonians 2:13-16 reads, “We also constantly give thanks to God for this, that when you received the word of God that you heard from us, you accepted it not as a human word but as what it really is, God’s word, which is also at work in you believers. For you, brothers and sisters, became imitators of the churches of God in Christ Jesus that are in Judea, for you suffered the same things from your own compatriots as they did from the Jews, who killed both the Lord Jesus and the prophets, and drove us out; they displease God and oppose everyone by hindering us from speaking to the Gentiles so that they may be saved. Thus they have constantly been filling up the measure of their sins; but God’s wrath has overtaken them at last.”

Just to recap, the Romans text says that salvation is first for the Jew and then for everyone else. The Thessalonians text essentially states that God’s wrath has come down upon the Jews at last as a result of their killing of Jesus and others.

And, supposedly, Paul wrote both of these texts. Reading these two passages sent me into a bit of a crisis.  I remembered studying that some of the epistles attributed to Paul are thought by scholars to have been written by someone else in his name. After a week of reading these seemingly opposing words, I e-mailed my professor about my discovery and concern over the texts. She responded, affirming me and stating that I had, in fact, noticed something that other scholars also found to be problematic (scholars believe that Paul wrote both Romans and 1 Thessalonians but that THIS short passage in Thessalonians was added to his text by a scribe later, ultimately being copied and included in the canon as it stands today).

It would have been so easy to gloss over this problematic passage and simply believe that I simply could not fully understand. But, after reading it, I could not ignore it. For me, it would have been just as unappetizing as eating shaving cream that I thought was whipped cream solely because I expected it to be whipped cream, ultimately ignoring my own senses and my own experiences.

The challenge, then, is becoming willing to give merit to our personal experiences and our own abilities to reason. Doing so does not dishonor Scripture or tradition; it simply broadens our understanding and gives our faith greater depth.

Previous Ask A Muslim: How do you feel about non-Muslims coming to the mosque?
Next Ask An Atheist: What can be done about climate change?