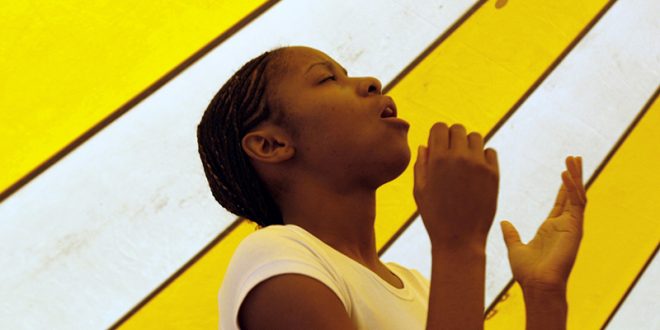 Shavon Gardner, 17, prays as she sings with the Redeemed Christian Church of God youth choir at Redemption Camp in Floyd, Texas on June 17, 2009. Photo courtesy of REUTERS/Jessica Rinaldi *Editors: This photo may only be republished with RNS-UNAFFILIATED-SURVEY, originally transmitted on June 28, 2016.

God? Meaning of life? Many Americans don’t seek them in church

(RNS)  The “seekers” have left the church — if they ever came.

LifeWay Research has taken a close look at what might draw them in, zeroing in on people who say they have not attended a religious service in the past six months except for special events or holidays.

Talk about God? Not so much, said 3 in 4 of the 2,000 “unchurched” people in the survey –including 57 percent who identified as Christians.

“Are a lot of Americans on a conscious journey to learn who Jesus Christ is? I don’t think so,” said Scott McConnell, executive director of LifeWay, which is based in Nashville, Tenn.

The survey was conducted May 23-June 1. The margin of error is plus or minus 2.7 percentage points.

The findings suggest most folks could be lured to church through events where faith is not explicit: community causes, entertainment and sports.

Even that old “seeker” standby — the search for meaning — doesn’t cut it for many who a decade ago might have read Rick Warren’s mega-selling handbook, “The Purpose Driven Life.”

Although 57 percent of those surveyed said finding “their deeper purpose” is “a major priority,” 31 percent disagreed at least somewhat and 12 percent were unsure.

That finding can be read two ways. Either folks are feeling secure in their salvation, even without church, or “most unchurched people don’t particularly care,” said McConnell in an interview.

Fully 70 percent of people who do not attend religious services agreed that “there is an ultimate purpose and plan for every person’s life.”

But whose plan is the unanswered question.

LifeWay deliberately didn’t mention God in asking about “plan” and “purpose,” McConnell explained, because it wanted to assess whether people had “a framework of wanting to make better, or the best, choices for life.”

If they already view life in terms of plans and goals, it’s easier to talk about the Christian faith. Evangelizing is like marketing a product — you need a value that matters to the customer, McConnell said.

The survey suggested that while evangelical churchgoers say heaven is the main benefit of their Christian faith, “that value proposition is not a product the unchurched are looking to buy,” McConnell said.

The survey found that 43 percent said they never wonder if they’ll go to heaven when they die and 20 percent can’t recall the last time they thought about it.

The results were not entirely bleak, however: Nearly 62 percent would come for a meeting at church on neighborhood safety.

Offering a venue to “express compassion” can be a top draw for churches, Rick Richardson, professor of evangelism and leadership at Wheaton College, said in a press release. He is a research fellow for the Billy Graham Center for Evangelism, which sponsored the survey.

Other ways people could be inspired to visit were for events such as concerts (51 percent), sports or exercise programs (46 percent) or a neighborhood get-together (45 percent.)

Most (51 percent) said a personal invitation from a friend or family member could draw them to church. And many are willing to at least listen to the benefits of being a Christian. Only 11 percent said they’d change the subject if religion came up in conversation.

But only about 1 in 5 would accept if that invitation came from a church member knocking at their door, a TV commercial, postcard or Facebook ad.

McConnell said bringing people into church is “a different kind of conversation. It’s like cajoling them to take a blind date with someone you want to spend your life and your eternity with. We need to say take it one day at a time: ‘Let’s introduce you to Jesus and see what you think.’”

Previous Why all the talk about psychopaths and us vs. them!?
Next Whitworth Institute of Ministry to focus on Christian Discipleship in the 21st Century