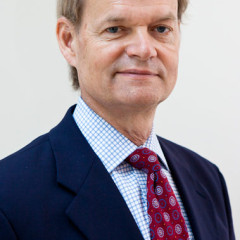 God is alive and well in America, says Gallup chief

Despite a deep drop in the number of Americans who identify with a particular faith, the country could be on the cusp of a religious renaissance, says Frank Newport, editor-in-chief of The Gallup Poll.

Grounded in more than a million Gallup interviews, Newport’s new book, “God is Alive and Well,” argues that the aging of the baby boomers, the influx of Hispanic immigrants and the links between religion and health could portend a bright future for faith in America.

He spoke recently to Religion News Service about his Southern Baptist roots, why mainline Protestants need to have more babies, and why companies should reward employees who attend church.

Q: Why did you write this book?

A: I think religion is extremely important in America today. All of our research shows that, and I wanted to get empirical data about religion out there, rather than just speculation.

We here at Gallup have had a tracking project since 2008. We do 350,000 interviews a year, which is a huge and unique dataset that nobody else has. And personally, I grew up in a religious background and always found it interesting.

Q: Your grandfather was somewhat of a Southern Baptist bigwig, no?

A: His name was Frank Leavell, and he was one of nine brothers, all born and raised in Oxford, Miss. All, in one way or another, went into religious service. One was a missionary to China, one was a pastor, one was president of a New Orleans Baptist seminary. My grandfather was convinced that it is important to reach out to college students, and is credited with founding the Baptist Student Union.

Q: And your father was a Southern Baptist theologian and minister. Are you still religious?

A: Yes, I would say that I’m religious, but like a lot of people, in a somewhat different way (than my forebears). I moved up to New Jersey and go to a Presbyterian church. I’m not sure there are Southern Baptist churches here, and the Southern Baptist (Convention) itself has changed.

Q: Getting back to your work, what’s the single most important trend in American religion today?

A: One trend that I’m asked a lot about is the rise of the “nones,” about which there’s a huge amount of publicity, but which is often misinterpreted. When Gallup asked the question about religious identity back in the 1950s, almost zero would say they have “none.” People would say “Baptist” or “Catholic” even if they were not particularly religious. Now, 18 percent of Americans, according to Gallup polls, say they do not have a particular religious identity. That doesn’t mean that 18 percent are atheists — only 5 or 6 percent say they don’t believe in God — but people are changing how they express their religiosity.

Q: So is the rise of the nones basically a matter of more Americans admitting the truth about their religiosity to pollsters?

A: That’s one hypothesis. Back in the 1950s, 99 percent of people had a religious identity. That was the cultural norm. Some people call it the “dog-tag religion.” Like, if you were raised Catholic but never went to Mass after you left home, but when asked what you would put on your dog tag you’d say “Catholic.” Today, though, Americans are freer from those social norms and express their identity in different ways.

Q: Despite the rise of the nones, you say that religion is poised for a renaissance in America.

A: Well, I wouldn’t predict it. But it certainly is a possibility that, rather than continuing to decrease, religious identity could increase. We’ve been analyzing data from 350,000 interviews since 2008, and 2012 showed the lowest increase in the percentage who said they have no religious identity, so that might be leveling off.

Q: Do other trends point to a religious revival?

A: If you look at age, the baby boomers are approaching 65-85 years old, which we’ve seen as the most religious age group for decades. It’s a reasonable expectation that the huge group of boomers is going to become more religious, and because they are so big, they’ll make the country more religious in the aggregate.

In addition, the country’s increasing Hispanic population tends to be more religious. Religion has been correlated to health, so more people may seek out religion because it’s good for them. And Americans are migrating to states that are more religious, which tends to make (the travelers) more religious.

A: That’s an interesting area of inquiry that we’ve looked at very carefully. That’s probably true that people overstate how often they go to church. But it’s a generalization. It doesn’t mean that someone attends church 52 weeks a year. But we’ve found that church attendance is a good surrogate for religiosity. People who report to an interviewer that they attend services often are in fact more religious than others, even if they don’t actually attend services as often as they say they do.

Q: In other words, overstating how often you attend church is a good indicator that you think religion is important enough to, ah, fib about?

Q: Along those lines, Gallup says Southern states are the most religious because lots of Southerners go to church and tell pollsters that faith is important to them. But Southern states also have higher divorce rates, a large number of abortions, and an unhealthy amount of obesity — or gluttony, as Christians might say. How do you square that?

A: That’s a good question. Basically, we’re dealing with religion as defined by self-reported identity. I don’t get into manifestation of religion in terms of personal behavior in the book. We don’t have data on that, but it’s an interesting area to look at. Certainly you have  people who attend church weekly who still engage in behavior that could be defined as sin. But it’s also important to know where that behavior in those states is coming from — the more religious or the less religious (people)?

Q: You write that mainline Protestants are pretty much doing everything wrong in terms of growing their churches. Why’s that?

A: For any group to grow, whether it’s a country or a church, you have to have more people coming in than going out. For example, the Catholic Church holds its own in terms of percentage of the American population because of the in-migration of Hispanics. But there is no massive in-migration of Protestants. Secondly, there’s been no evidence that they’ve been able to evangelize effectively. And thirdly, one way you grow is to have high fertility rates. Mormons are doing that well because their theology encourages big families. But Presbyterians, for example, have less children on average (than other Americans).

So, if you look at all the ways churches could grow, the mainline Protestants haven’t been able to hit the nail on the head with any of them.

Q: Is there any evidence that mainline Protestants’ fierce debates over homosexuality are costing them church members?

A: That’s an interesting hypothesis that you hear a lot: Nondenominational churches can focus more on active ministry to parishioners, while mainline churches’ annual meetings are spent arguing these issues. But the empirical data on that is lacking. It certainly seems to be a viable hypothesis.

Q: You mention that the Catholic Church has held its own thus far, but suggest that it faces trouble ahead.

A:  That data clearly shows that in-migration of Spanish-speaking people has really slowed down recently with the economy slowing down. On the other hand, Hispanics typically have more children (than other Americans) and many of them are in the fertile age range. Still, it’s clear that the Catholic Church can’t count on the same in-migration of Spanish-speaking Catholics that it had over the last 20 years or so.

Q: Why do you propose that the government and companies promote religion as a means to reduce health-care costs?

A: That certainly is controversial. We have separation of church and state in this country. But the correlation between religion and well-being has been established by Gallup and many other organizations. The question is causality: Maybe healthier people choose to be more religious. But it’s clear that religious (people) are less of a drain on our mental and physical health systems. So, a company may want to give discounts for employees who attend church four or five times a month, just as many give discounts for employees who go to the gym. If America were to become more religious, and this is controversial, it would become healthier.

Previous Gold, guns, girls: is it ever gonna be enough?
Next Snow covered Abbey