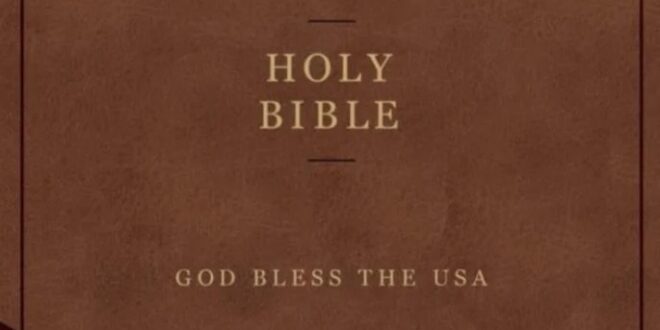 The cover of the God Bless the USA Bible. Photo courtesy of Hugh Kirkpatrick

The new “God Bless the USA Bible,” which combines the biblical text with the USA’s political-founding documents, is ironically both un-American and unchristian.

This Bible was originally set to include the New International Version translation along with the Bill of Rights, the U.S. Constitution, the Declaration of Independence, the Pledge of Allegiance and the chorus of Lee Greenwood’s 1983 song “God Bless the USA.”

In an interview with The Tennesean, Greenwood said he “couldn’t believe there’d be a better match than faith and patriotism.”

America, the proverbial melting pot, is not a Christian nation. The Constitution states that “Congress shall make no law respecting an establishment of religion, or prohibiting the free exercise thereof.” Including America’s founding documents and the chorus of Greenwood’s song within the covers of the Bible is therefore un-American.

Yet, America has for a long time operated on an unofficial understanding of Christian privilege — the prioritization of Christian norms often at the expense of the practitioners of other faiths. Christians appropriating these documents in this way are disrespectful and dismissive of their siblings of other faiths who also love the land of the free and the home of the brave.

The scheduled publication date of this book furthers the message above. The “God Bless the USA Bible” will be available in September, in coincidence with the 20th anniversary of the Sept. 11 terrorist attacks. Despite the common understanding that American “came together” after 9/11, hate crimes “against Muslims, Sikhs, and persons of Arab and South-Asian descent, as well as persons perceived to be members of these groups” increased in the years following this tragedy.

The release of this Bible in September is a way of saying, “America is for Christians only,” a wholly un-American sentiment.

Likewise, including those documents in the publication of the Bible is unchristian. Jamie Aten and Kent Annan of Christianity Today said pairing these political documents with the Bible “signals a divine endorsement of what we have no evidence of God endorsing.”

It is prideful to assume such an endorsement and idolatrous to equate the significance of the Bill of Rights with that of God’s sacred text. Further, as the Apostle Paul said, we are “ambassadors who represent Christ” (2 Corinthians 5:20). To be an ambassador is to represent one’s home in a foreign place. Thus, to be Christ’s ambassador is to be living on earth only temporarily as representatives of the kingdom of heaven.

If earth is not our final home, how much less is America our final home? To equate a human-made nation with God’s eternal kingdom is idolatry.

HarperCollins, the publisher that originally signed onto the project, pulled out of the arrangement due to backlash and petitions against the project. The marketing firm working on the project, Elite Source Pro led by Hugh Kirkpatrick, still intends to publish this Bible. Using the public domain King James Version — authorized by an English king in 1611 before the “USA” was established — Kirkpatrick has sent the plans for the Bible to various publishers.