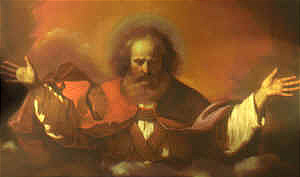 In the last post, I argued, or at least implicitly suggested, that given a Christian conception of God, we would not expect to exist in a physical world — i.e. one of a different substantive class than God, which is governed (for all we can tell) exclusively by natural laws and where we have little to no direct experience of the divine.

More specifically, game theory suggests that a rational God, desiring, above all, to be in relationship with “his” creatures, would create us in a way that is most conducive to our relating to “him.” But as physical creatures, we are hopelessly entrapped and severely limited by our physicality. For instance, we depend heavily upon our ability to gather sense data and take measurements. Furthermore, our physicality makes us highly subject to error and malfunction. After all, it is even held on the Christian view that God is incomprehensible to us finite, physical beings. We don't even know what “spirit” is supposed to be. It would seem, then, that the better, and hence expected, course of action would be to make us of the same “kind” as God, namely spirit beings, and it is quite suspicious that, instead, we reside in a world where the “spirit realm” is completely unobservable.

Now, so far, this is not a devastating critique. One could still maintain there is some reason for God to want a physical world, especially if “he” is going to somehow remedy our disadvantage. Nevertheless, it is still problematic and opens the proverbial door to more powerful critiques.

Of course, none of the forthcoming critiques would have much force if it were simply believed God was the sort of being to run experiments and then gather everyone together for a post life review and perhaps another go around. Instead, the Christian position is to have one believe God is especially concerned to have a relation with everyone now. Furthermore, it is essential to be in this relationship within this life, after which awaits eternal punishment for those who fail to achieve it. Is this what we would expect? I think not. Why should a God with no temporal limitations care when the relationship begins so long as it does begin? And even if there is some need for afterlife punishment, what purpose could there be to it being eternal?

Even so, one might argue that if these things are known up front, then everyone has fair warning and no excuse not to choose God by the time this life ends. But apart from the bizarre, unsavory nature of such a response, it is manifestly false that this is something which people know. This world is full of confusion and God, if there is one, remains hidden. Given any period of relevant history, the majority of the human population has been non-Christian. Thus, on the Christian position, this means that the significant majority of humanity is ending up in Hell, never to be in relationship with God.  Even more troubling is that this is not due to some fiendish rebellion or desire to reject God, but merely for not possessing the correct beliefs. Millions sincerely believe, contra Paul, the existence of God is not evident in nature, but rather find there to be compelling arguments and evidence for naturalistic theories.  Billions more are sincerely convinced of a myriad of other ideas all of which are mutually conflicting and radically differ from the Bible. Is this what we would expect? I think not.

So, examining the world and finding it in the state that we do,  the very likely conclusion is that God, as conceived by Christians, does not exist.

Readers, what do YOU think? Leave a comment below!

Epictetus said, Content yourself with being a lover of wisdom, a seeker of the truth. One could say this is the very purpose of Ryan Downie’s life. What drives him, he said, is knowledge and understanding, an insatiable desire to learn.