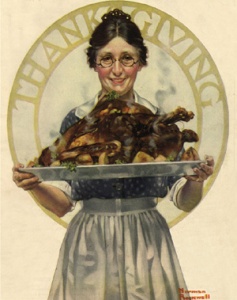 Now, a group of charities and corporate sponsors is urging Americans to make the Tuesday after Thanksgiving just as powerful a day of giving to those in need.

It's called #GivingTuesday, and organizers say it's gaining momentum as the holiday shopping season approaches.

“We have two days that are good for the economy. Here is a new day that is good for the soul,” said Henry Timms, deputy executive director of strategy, innovation and content of 92nd Street Y in New York City, where the idea was hatched.

There are 800 partners, from non-profits to corporations, including heavy hitters such as Microsoft and Sony. Timms credits the social-media community with growing the momentum.

#GivingTuesday is a consumer movement, much like the big post-Thanksgiving shopping days, and organizers say it's up to people to make it a success. The goal is to drive donations of time, money or services to charities with the same enthusiasm that shoppers have on Black Friday.

The recession has hit charities hard. Americans gave $298 billion in 2011, according to Giving USA, well below the peak of $310 billion in 2007. That's compared with a nearly $1 billion uptick of retail sales on Black Friday last year, when buyers spent $11.4 billion.

Timms said the plan calls for a look at the amount of charitable giving in the week after #GivingTuesday to counter these typical shopping stats.

Representatives of charities say capturing any part of holiday spending would help.

“I would encourage people to stop shopping for 15 minutes, log in to your favorite charity's website and make a contribution,” said Lindsay Hearn, director of communications for the Asheville, N.C.-based Community Foundation of Western North Carolina, which offers philanthropic services.

“I think it will pick up,” said Rachel Toman, 28, of Fort Lauderdale, who was shopping while visiting Asheville. “If it goes through social media, then yes, people will jump on board.”