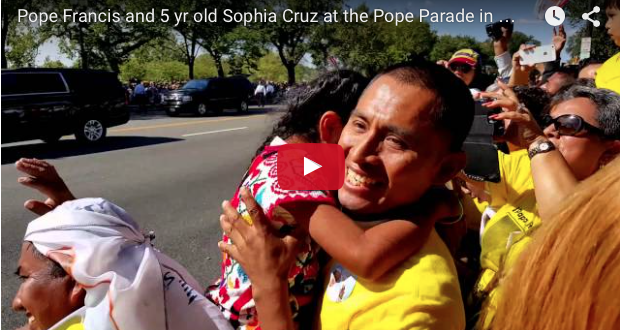 Girl gives letter to pope, fears her parents will be deported

WASHINGTON — The delivery of a crayon-scrawled letter to Pope Francis by 5-year-old Sophie Cruz may have been the most memorable moment of Francis’ first full day in the United States. But it was no chance encounter.

Sophie, whose father lifted her over the barricades as Francis paraded down the Ellipse, told CBS and other news outlets that she gave the pope the letter and illustration as a means of delivering a message:

“Pope Francis I want to tell you that my heart is sad. And I would like to ask you to speak with the President and the Congress in legalizing my parents because every day I am scared they will take them away from me,” Cruz told CBS News.

Sophie said she is an American citizen, but her parents are both undocumented immigrants from Mexico. The family lives in California and traveled to Washington, D.C., with members of their church as part of an organized advocacy push for immigration reform.

In Sophie’s interview with CBS, she answered most questions about her embrace with the leader of the world’s 1 billion Catholics with one- or two-word answers. Asked about immigration, she delivered long, seemingly memorized responses about why her parents and other immigrants deserved to stay in the United States.

The child’s father, Raul, speaks very little English, but did say he was “surprised and happy” that his daughter was able to get so close to Pope Francis, and he told CBS he hoped that the pope would talk to Congress about helping immigrant parents like himself remain in the country.

Francis opened his remarks at the White House on Wednesday by referencing America’s immigrant history. The Vatican has not tipped its hand as to what Francis may say in front of a joint meeting of Congress on Thursday.

The Cruz family hopes its simple message on Wednesday might lead him to say more about immigrants’ plight.

Previous Connections, community can be found online
Next This Mormon Loves the Pope