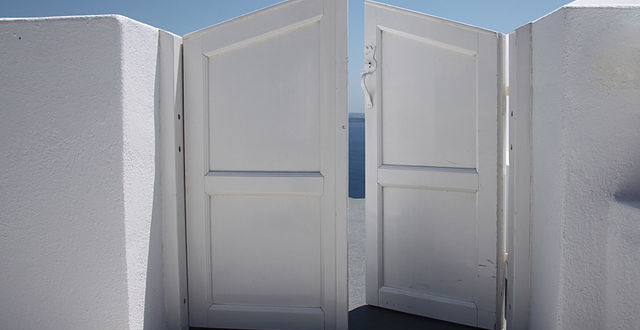 Getting Through the Front Door of Progress

In the early days of civilization “Us vs. Them” mentalities greatly increased the odds of survival and significantly shaped human nature. Us versus them is an old survival mechanism; ever since the ancient tribes who didn’t show that kind of blind loyalty were killed off by the fierce tribes who did. You’d think 10,000 years later, our enlightened intellects should be humbled by the fact; but  we’re still basically hard-wired to form tribal mentalities.

Today, we still have our religious wars, genocides, racisms, as well as, the petty demeaning dehumanization of everybody outside of our group (“hippies,” “rednecks,” “geeks,” “libs”, “cons,” “infidels,” “towel-heads,” “bums,” etc. ) and we mistake this as being some law of human nature. Why?

Enter The “Us vs. Them” Tool

Many of us have adopted the popular but, bleak view that psychotic examples of violence and petty dehumanization since the beginning of civilization, is empirical evidence of our hopelessly destructive human nature.  Yet, studies by anthropologists express a completely different version of human nature. A cross-cultural analysis found that nomadic hunter-gatherer populations rarely organized to attack other groups. “War arose recently in human history,” anthropologist contend and human nature may not be so warlike and contentious after all.

So What the Hell is Going On?

If you are familiar with the social psychology of Us vs. Them, then you also understand that the same Us vs. Them training, that works so well for getting people whipped into a murderous apocalyptic frenzy, can also be used to sell cars, or hamburgers, or cellphones, or get Conservatives and Liberals deadlocked until the end of all time.

The effects from continual Us vs. Them propaganda, has made a great many of us unknowing blocks to a more united country, and to the pursuit of justice and progress.

Take the ‘Rights Wars’ for example,

Each side, spends all of their energy, fighting for and protecting ‘Their Rights’ and of course, many times ‘Their Rights’ encroach on ‘The Rights” of other people but, that’s not acknowledged as being offensive or unfair because after all, “It’s My Right” (US) and this is war with (THEM) plus, it fits well with our societies erroneous survival of the fittest mentality. Booyah!

Today, healthier, less oppressive forms of co-existence are attempted by those who choose to resist being swept along with old forms of primitive hard wiring and manipulation. Today, society at large is beginning to recognize certain forms of manipulative mentality and behavior as mental illness, not survival skills and definitely not a law of human nature. For instance, if any person obtains power and money from shamelessly manipulating others to their detriment, not even for survival reasons, just mo’ money mo’ money, then most schools of thought are beginning to recognize that “you gots yerself some pathological problems there son.”

Whether or not we as a society choose to accept the fact doesn’t change the fact that there are people in positions of power and control who refuse, are unable to recognize or, just don’t give a crap about the devastatingly destructiveness of “Us vs. Then” mentality -they have only one goal in mind, more POWER over others. And they really know how to make Us vs. Them work to their advantage by shamelessly manipulating our proclivity to tribal mentality.

Some readers might not think that this is an appropriate point in this article to add a little humor, and perhaps they are right but, I’ve found that humor at times makes sad reality easier to digest. So, with that in mind; the most powerful power and profit hungry predators in ‘all walks of society’ manipulate us —into defining our group, consciously and unconsciously, as the (humble) elite group, a shining beacon in a world full of weak-minded walking talking turds. Often this is combined with seemly innocuous siege terminology that when broken down amounts to, “The whole country has gone to hell, but we’ve got to stand up for common sense and our Rights! Folks, it’s us against the world!”  Result: Most often, violent divisions, oppression and deadlock for everyone in society, except for those using the “Us vs. Them” tool. (actually, it hurts them as well but, in a different way)

People seeking more power over others also understand that, not only is “Us vs Them” the first and most important technique on the road to controlling you, it’s the culmination and end goal. Drawing you into the right tribe is what those pursuing ever more power and money love the most, because they can accomplish ‘nothing’ without tribe’s people.

Simple Steps We Can All Take

If your interest is making the world a better place, then ‘expose’ the manipulation which creates unhealthy forms of divisions between us. Understand how to identify Us vs. Them mentalities in your own group. Learn how to unite with other humans outside your chosen group, by not constantly trying to change them. Nurture and encourage human feelings and emotions like, solidarity, support and sympathy. Insist that they become dominant aspects of your human nature and personality.

Next Post: “Hey! I thought these posts were about human nature, why all the talk about psychopaths and us vs. them!?”

Tags human nature progress us vs. them mentality

Previous Father Knows Best: Where is the Christian Left?
Next Ask A Jew: Where can I get a mezuzah in Spokane?