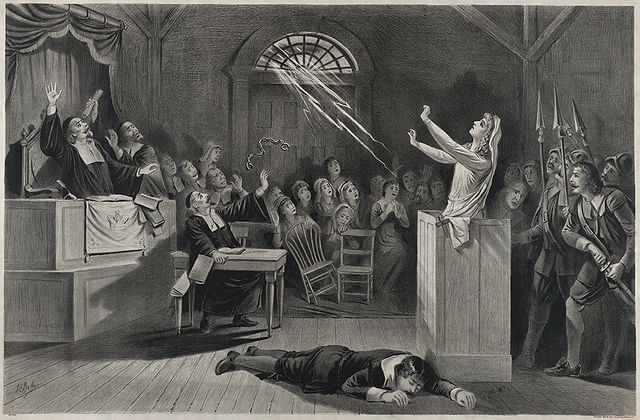 Getting justice for victims of Connecticut’s witch trials

At 82, Bernice Mable Graham Telian doubts she’ll live long enough to see the name of her seventh grandmother and 10 others hanged in Colonial Connecticut for witchcraft cleared.

Telian was researching her genealogy when she discovered that her seventh grandmother, Mary Barnes of Farmington, Conn., was sent to the gallows at the site of the old State House in Hartford in 1663.

“You won’t find Mary’s grave. She and all these people who were hanged were dumped in a hole. Their graves aren’t marked. They wanted them to be forgotten,” said Telian, a retired university administrator living Delhi, N.Y.

The discovery so shocked Telian that she spent the last five years writing a book, “My Grandmother Mary Was Hanged,” about her ancestor’s execution.  She's also part of a long-protracted effort to get Connecticut lawmakers to clear the names of the 11 people executed between 1647 and 1663 for witchcraft in the state.

Connecticut was executing suspected witches some 40 years before Salem, Mass.  Scores of others were put on trial until witchcraft was no longer listed as a capital crime in the state in 1715, according to state records. But unlike Massachusetts, New Hampshire and Virginia, Connecticut has yet to acknowledge those sent to the gallows.

“I'd like to see this happen in my lifetime,” said Telian.

In 2008, Telian wrote to Connecticut lawmakers when a resolution was introduced in the General Assembly to acknowledge the witch trials.  Lawmakers heard testimony from descendants of executed witches and historians, but the measure died. There was even an earlier effort to get the victims pardoned, but the state board of Pardons and Parole said it doesn't grant posthumous pardons.

Now members of the Connecticut Wiccan & Pagan Network are pushing Gov. Dannel Malloy to sign a proclamation to clear the names of the victims.  Supporters are asked to send Malloy a postcard that reads: I am a Pagan/Witch and I vote. Clear the names of Connecticut's eleven accused and executed witches.

Anthony Griego, who is heading the effort, said the proclamation is non-binding and doesn't open up the door for lawsuits.

“The witch hunts were about fear and intolerance,” said Griego. His group even wrote to the Queen of England seeking a pardon for the accused. The Queen's office wrote back denying the request.

Malloy’s office did not respond to a request for comment.

According to state records and historians, Alse Young, of Windsor, was the first to die in 1647.  Next was Mary Johnson. After that were Patricia Borris' great grandparents, ten generations back, John and Joan Carrington of Wethersfield who were hanged in 1651.

“This is a travesty of justice,” said Borris of Colorado. “Why doesn't Connecticut clear their names?”

Frank Kirkpatrick, who teaches religion at Trinity College, said the evidence the courts were presented during the trials was flimsy at best.  The courts drafted  laws based on Bible passages found in Exodus, Leviticus and Deuteronomy, he said.

“The evidence was so circumstantial and virtually improvable that the only sure way to a conviction was a voluntary confession,” said Kirkpatrick, who will give a talk on the trials on Oct. 18 at the Wethersfield Library.
Because few records about the witch trials exist, Telian is not sure why her seventh grandmother was accused of being a witch. The same year Barnes was hanged, Patricia Greensmith who was found dancing and drinking “sake” in Hartford was later hanged with her husband, Nathanial.B

But what will haunt Telian under her days end is the court’s decree condemning Mary Barnes to death.

It reads: “Mary Barnes thou art here indicted by the name of Mary Barnes for not having the fear of God before thine eyes, thou hast entertained familiarity with Satan, the grand enemy of god and mankind – and by his help has acted things in a preternatural way beyond human abilities in a natural course for which according to the law of God and the established law of this commonwealth thou deservest to die.”

For further information about the Connecticut witch trials read “The Witchcraft Delusion In Colonial Connecticut (1647-1697),” by John M. Taylor, which can be found online.