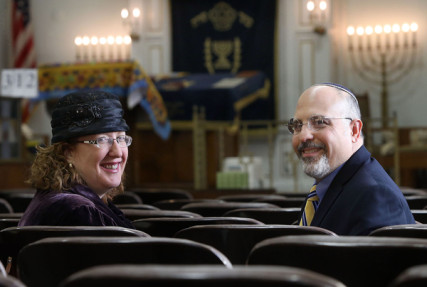 Rabbi Hyim Shafner, right, and wife Sara Winkelman, pose for a portrait at Bais Abraham Congregation in University City, on Friday (Jan. 24). On Sunday (Jan. 26) Bais Abraham Congregation held a postnuptial signing party so that even couples who are already married can avoid the pitfalls of breaking free from a Jewish marriage. Photo by Stephanie S. Cordle, St. Louis Post-Dispatch

To get around Jewish law, some rabbis insist on prenups

(RNS) For some Orthodox Jewish women the problem isn’t finding a mate, it’s getting a religious divorce when the marriage goes sour

Rabbi Hyim Shafner, right, and wife Sara Winkelman, pose for a portrait at Bais Abraham Congregation in University City, on Friday (Jan. 24). On Sunday (Jan. 26) Bais Abraham Congregation held a postnuptial signing party so that even couples who are already married can avoid the pitfalls of breaking free from a Jewish marriage. Photo by Stephanie S. Cordle, St. Louis Post-Dispatch

To obtain a religious divorce in the Orthodox Jewish community, a wife must first secure a “get,” a letter dictated by the husband and written by a trained scribe that in essence gives the wife permission to sever the marriage and move on. Without it, she is unable to remarry and any future offspring she might have is considered illegitimate. In other words, she is a chained woman, or in Hebrew, an “agunah.”

Now, some Orthodox rabbis are insisting that couples planning to marry have a prenuptial agreement. Last Sunday (Jan. 26), Bais Abraham Congregation in Missouri’s University City held a postnuptial signing party so that even couples already married could avoid the pitfalls of breaking free from a Jewish marriage.

The postnups stipulate that in the case of a divorce, the couple will go to rabbinical court, a tribunal made up of three rabbis, and abide by whatever the judges say. It also specifies that the wife must be paid $150 for every day she and her husband live apart but remain married.

The issue of agunah most directly affects the Orthodox community, with its strict adherence to Jewish law.

But even some non-Orthodox Jews wrestle with the question of obtaining a “get.” Those, for example, who plan to remarry within Orthodox Judaism must ensure they are regarded as single. Or a mother who hopes to raise her children within the Orthodox tradition might fret about others looking down on the children as illegitimate because she was married to her previous husband at the time she became pregnant.

Recently, a pair of Brooklyn rabbis gained notoriety after news reports describing how they charged women in need of a “get” $60,000 (including as much as $10,000 for a rabbinical decree permitting violence) to kidnap and torture recalcitrant husbands to give their wives a “get.” An FBI undercover agent posing as an Orthodox Jewish woman soliciting their services landed the men in jail.

A recent survey by the Mellman Group, a national polling research firm, found that between 2005 and 2010, there were more than 460 cases of “shackled” Jewish women in the United States and Canada.

Rabbi Jeremy Stern, executive director of the Organization for the Resolution of Agunot, a New York-based nonprofit that assists in resolving contested divorces, says that about 150 to 200 women a year come to them for help.

Since the organization’s founding in 2002, it has resolved 212 cases.

“We see the issue of refusing a Jewish divorce as a form of domestic abuse,” Stern said.

A recalcitrant husband may hold the desire for a “get” over the wife’s head, using it as a bargaining chip and demanding money or child custody in return for his permission to end the marriage.

That was the case for a St. Louis-area physician. She was 25 when, after dating for three years, she married a man with whom she later had three children. The marriage lasted more than a decade.

Although she was able to gain a civil divorce in 2002, it took four additional years to procure a religious divorce.

“Not allowing me to have a ‘get’ and be able to move on romantically with my life was a way of controlling me and causing me pain,” she said. “And the problem is it doesn’t just cause the wife pain, the children suffer.”

She now regrets not signing a prenuptial agreement with her husband, especially because the method has proved to be effective by most accounts.

But some caution that nuptial agreements function only as Band-Aids.

“It’s better than nothing,” says Susan Aranoff, co-director of Agunah International, a nonprofit based in Brooklyn that helps women win a “get” from their husbands. “It’s a good idea for people to sign it … but the community shouldn’t be misled into thinking that that solves the problem.”

They argue that according to Jewish law, a wife can be freed from a marriage if she becomes aware of a previously unknown defect in the character of her husband. The problem, they say, is that it’s unclear what kind of circumstances merit an annulment of this kind. But they insist that a husband refusing a divorce deserves this kind of action.

“Nobody should be able to hold anyone hostage,” Aranoff said.

“It’s a political problem,” Freilich added. “These rabbis are afraid of being branded that they’re not religious enough.”

(Lilly Fowler is the religion reporter for the St. Louis Post-Dispatch.)

The post To get around Jewish law, some rabbis insist on prenups appeared first on Religion News Service.

View All Posts
Previous POLL: How would you rate Obama’s State of the Union Address?
Next For Darwin Day, professor to discuss how, why to create atheists