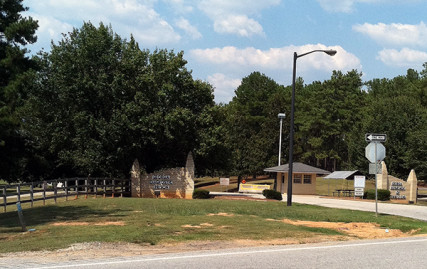 (RNS1-JUNE 17) The Georgia Diagnostic and Classification Prison houses the state's execution chamber and is the state's largest prison. For use with RNS-EXEUCTIONS, transmitted June 17, 2014. Creative Commons image by NeilATL

Georgia execution would be 1st since botched Oklahoma effort

After an unusual six-week lapse in executions in the nation since a botched effort in Oklahoma on April 29, two men could face lethal-injection deaths in Georgia and Missouri Tuesday night (June 17) or early Wednesday.

Should the execution of Marcus Wellons go forward at 7 p.m. ET Tuesday in Georgia, it would be that state’s first lethal injection using a drug not federally approved. That’s the result of a scramble by Georgia and other states in recent months to obtain drugs necessary for executions.

Wellons, 59, was sentenced to death for the 1989 rape and murder of 15-year-old India Roberts, whom he abducted as she was on her way to a school bus.

At 12:01 a.m. Wednesday, Missouri is preparing to execute John Winfield, who blinded the mother of his two children and killed two other women in a 1996 shooting spree. A judge on Thursday issued a stay of execution, but prosecutors are seeking to have it lifted in time for Winfield’s execution to proceed.

A third inmate, in Florida, is slated to be put to death Wednesday evening.

Wellons’ case gained notoriety when defense lawyers unsuccessfully attempted to have the conviction thrown out in 2012 on grounds that jurors in his trial acted improperly when they gave the trial judge and a bailiff erotically shaped chocolate as gifts.

Attorneys for Wellons are moving to block his execution on grounds similar to those raised in other states, arguing that Georgia’s secrecy surrounding the barbiturate it plans to use violates the condemned prisoner’s constitutional rights.

Georgia has joined a host of other death penalty states scrambling to find necessary drugs for carrying out lethal injections after federally approved manufacturers have elected in recent years to no longer sell their pharmaceuticals for use in executions.

Wellons’ lawyers argue that Georgia intends to use an overdose of pentobarbital produced by a a compounding pharmacy and not a federally approved manufacturer. Compounding pharmacies, which mix drugs to order, are not heavily regulated by the federal government. Similar legal grounds were raised in the execution of Clayton Lockett by Oklahoma in late April.

That execution went awry and witnesses watched in horror as Lockett struggled against his restraints after drugs were administered. He writhed, groaned and attempted to speak before the execution chamber curtains were drawn to keep witnesses from seeing more. The execution was halted, but Lockett died, reportedly from a heart attack, 43 minutes after the process began.

Oklahoma Gov. Mary Fallin ordered an investigation. Meanwhile, an independent autopsy performed by a forensic pathologist hired by defense lawyers found that executioners had repeatedly struggled to insert intravenous needles into Lockett’s arms and groin, even though he had healthy veins.

Since that flawed execution, no others have taken place, and five scheduled executions have been delayed.

Previous Deadly decisions: We could be guilty of fatal errors, too
Next Feminist: My Favorite F Word