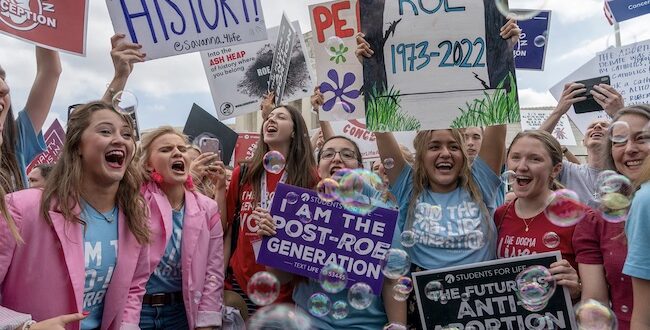 Anti-abortion protesters celebrate following the Supreme Court's decision to overturn Roe v. Wade, the federally protected right to abortion, outside the Supreme Court in Washington, Friday, June 24, 2022. The Supreme Court has ended constitutional protections for abortion that had been in place nearly 50 years, a decision by its conservative majority to overturn the court's landmark abortion cases. (AP Photo/Gemunu Amarasinghe)

Gen Z mixes abortion politics — like all their politics — with spirituality

Gen Z mixes abortion politics — like all their politics — with spirituality

Since the June 24 ruling on Dobbs vs. Jackson Women’s Health Organization, social theorists, cultural commentators and faith leaders have been eager to examine Gen Z’s attitudes toward the decision, hoping to glimpse the future of reproductive rights.

Our understanding of Gen Z and abortion has been all over the map; you hear this cohort — the Americans who are now of college age — called the “post-Roe generation” (true enough) but also simultaneously the “pro-abortion generation” and the “pro-life generation.”

Either way, many analysts insist that Gen Z has decoupled their views on abortion access from their religious or spiritual beliefs. One commentator suggested, “For most Gen Z Americans, abortion is not an issue wound up in ethical, moral and religious concerns, as it more often is for many other Americans.”

But others caution that while Gen Z polls strongly for abortion access at a national level, there are competing viewpoints and nuanced perspectives — diverse motivations that can’t be fully appreciated by simply citing national polls.

But these popular narratives about Gen Z’s lack of interest or engagement with religion are misguided. At Springtide Research Institute, where I serve as executive director, we survey Gen Z by the thousands each year on a variety of issues, and our bread and butter is their spirituality. While our research dovetails with other studies showing that young people distance themselves from traditional religious institutions and practices, we’ve gone further in order to determine what this trend is — and isn’t.

Far from separating their politics from their beliefs, Gen Z is comfortable melding belief with other forms of expression, including political expression. Our annual report, “The State of Religion & Young People 2021,” found that more than half of Gen Zers (58%) have engaged in acts of protest as a religious or spiritual practice. These acts of protest are most popular among those who say they’re very religious or very spiritual.

Indeed, we continue to find that majorities of Gen Z perceive themselves to be religious (71%) or spiritual (78%) and frequently integrate their beliefs into other areas of life.

At the same time, Gen Z — a generation that has watched faith leaders and religious institutions be exposed for betraying their stated beliefs and values — puts great stock in being authentic and whole, even if it means resisting fixed definitions for what it means to be religious.

We asked young people who currently or formerly served as Springtide ambassadors for our organization to share how their religious or spiritual beliefs inform their perspectives on reproductive rights in light of the Dobbs decision.

Newborn, who represents a rapidly growing trend of young people engaging with crystals, tarot and horoscopes as part of their spirituality, added, “We are already seeing so many young people flip tables and make strides towards a more inclusive future when it comes to religion, so why not reproductive politics as well?”

Zaina Qureshi is a 17-year-old high schooler who identifies as Muslim and spiritual. Though young Muslims are less likely than their peers to support reproductive rights, she is part of the majority of Muslims in America who support access to safe and legal abortion.

“Being raised Muslim and growing up going to Catholic schools, I was taught that all life is precious,” Qureshi said. “But with that comes holding the lives of the women who conceive as precious. My faith strengthens my belief that women should be given a choice and control over their bodies. Life is sacred and something that should be celebrated,” she added.

Abby Jones, a 25-year-old youth minister, identifies as Catholic. She is one of the just 21% of young women who believe abortion should be broadly illegal, according to Pew Research Center. “I have been pro-life from a very young age,” she said. “It was introduced to me through my school and the opportunities they gave us to pray for the unborn and women in crisis pregnancy. We had special rosaries that we would use to pray for that specific intention,” Jones explained.

Jones finds many of her peers don’t want to engage with her on the topic precisely because her views are colored by her faith. “Some people do not want to listen to my viewpoint, saying my religion cannot be a basis of my opinion, making my opinion invalid,” she said. “But my beliefs are influenced by the universal moral and widely shared belief that harming others is wrong.”

A slightly different approach is taken by CJC (a pseudonym), a 23-year-old who also identifies as Catholic. “I am Catholic and I agree with the protection of unborn children,” he said. “However, as a man, I believe strongly that it is not my choice to voice an opinion on a female’s body and what she chooses to do with it. The same goes for my work within anti-racism towards Black Americans. I will fight against the dialogue that discriminates against my brother and sister in Christ.”

As to their level of support for various causes, 75% of young people “care” or “care deeply” about reproductive rights, according to our research. They’re invested in the future of these rights, not just because of their politics, but as people whose politics are informed by religious and spiritual beliefs.

This moment is an opportunity for trusted adults, and especially faith leaders, to connect with young people and find out how their spirituality is connected to their feelings about Dobbs v. Jackson. Don’t assume you know. There’s more nuance than we are often led to believe.

(Josh Packard (@drjoshpackard) is executive director of Springtide Research Institute. The views expressed in this commentary do not necessarily reflect those of Religion News Service.)

Previous ‘Justice is fundamental to who Deb is’: Spokane pastor runs for county prosecutor
Next Consider the Soul — Another Perspective on Abortion