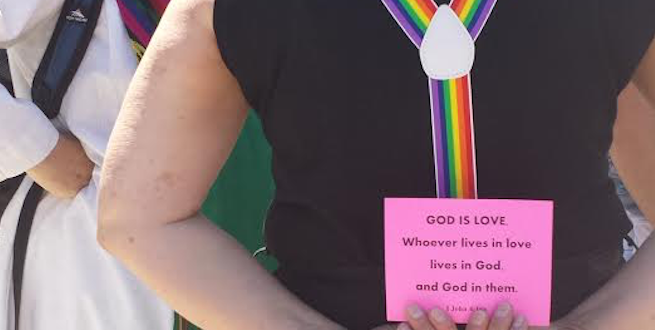 Gay Pride isn’t a sign of the End Times

During a conversation with a friend at church, we lamented the prevalence of war and terrorism in the news. “I just feel like the end of the world is coming,” she said. I nodded solemnly. Sometimes it seems as if the world has nothing but destruction to offer. Then she finished her statement, lowering her voice as if the words themselves were dirty: “like, with the gays and transgenders.”

My friend and other Christians hold this belief – that the increased prevalence of gay pride is a sign of the End Times – but it is a misconception. Where does this belief stem from? Let’s look at what Jesus has to say about his Second Coming. In Luke 17, he compares the days leading up to the End Times to the ways of the city Sodom: “It was the same in the days of Lot. People were eating and drinking, buying and selling, planting and building. But the day Lot left Sodom, fire and sulfur rained down from heaven and destroyed them all.” (v. 28-29)

The story of Sodom and Gomorrah in Genesis 19 is one of the most popular biblical passages used to argue that homosexual behavior is sinful. Lot hosts a visitor in his home, and the men of the city surround his house demanding that the guest be sent out so that they can have their way with him. Shortly after, the city is destroyed as a consequence for their behavior. Some argue that the sin of Sodom is homosexuality, but Scripture doesn’t agree with this claim. The prophet Ezekiel says that Sodom is punished because it is “arrogant, overfed and unconcerned; they did not help the poor and needy.” (Ezekiel 16:49) The ways Ezekiel and Jesus describe Sodom have nothing to do with sex at all – this city was engaged in everyday behavior and pride. We live in a world where we eat and drink, buy and sell, plant and build; where we are arrogant, overfed and unconcerned and we often do nothing to help the poor and needy. These are signs of the end times, not the prevalence of the LGBTQ+ community.

Jesus also discusses the End Times in Matthew 24 where he lists the following as signs that the End is approaching: deceivers claiming to be the Messiah, wars, rumors of wars, earthquakes, famine, religious persecution, and false prophets.

Some, like my friend from church, might suspect me to be a false prophet because they disagree with my understandings of Scripture regarding homosexuality. Some suspect that I have been deceived or am trying to deceive others and interpret that as a sign of Christ’s Second Coming. But I can assure you that I have prayed over this subject a lot and that I earnestly pursue God’s truth. My goal is not to deceive anyone, but to bring us all closer to God’s will for creation.

Admittedly, there are many false prophets at pride parades, but they are not the ones proclaiming that love is love or that Jesus loves members of the LGBTQ+ community. They are the ones proclaiming that God hates gay people and that all gay people are condemned to hell. Jesus loves everyone unconditionally, and to claim otherwise is deception. Jesus died for everyone – the woman at the well and the pharisee, the scantily clad drag queen and the man with the blowhorn.

What can help us determine who is a false prophet is to compare their teachings with those of God’s prophets as recorded in Scripture. As the prophet Micah says,

He has shown you, O mortal, what is good.
And what does the Lord require of you?
To act justly and to love mercy
and to walk humbly with your God. (Micah 6:8)

To align ourselves with justice, mercy, and humility is to fight for the rights of our LGBTQ+ brothers and sisters, forgive people their sins, and recognize that we can’t understand God’s ways or predict when Christ will come again.