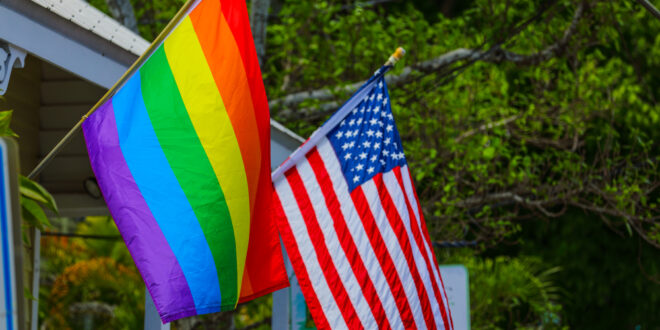 If a gay pride flag is banned in schools for being political, shouldn’t all flags be banned?

In August of this year, a Wisconsin school board voted in favor of a policy that prohibits teachers and staff from displaying American flags and other items that district officials consider political in nature.

The district actually banned teachers and staff from displaying gay pride flags and other items considered political in nature. In making such an ill-advised rule, they should have banned flags in entirety because flags are by nature a political symbol.

They weren’t used widely outside war and the battlefield until the 1700s, when people began thinking of themselves as members of nations and nation states; an inconceivable idea to many of us who have come of age in a time of nationalism and global wars. Before that, people thought of themselves as subjects of a king, not members of a shared nation.

Anyway, flags are political. All of them. If you don’t think so, imagine someone putting up the Confederate flag in a classroom, or, maybe, a British flag during the Revolutionary War. I suppose the residents of Haiti, whose nation we invaded and occupied in 1915, mainly because we wanted to do more business there, probably didn’t care much for the American flag at the time. The forced labor system we established probably had something to do with that. It’s all quite subjective, really.

What people generally mean when they say ‘something political’ is ‘something other people say, wear, use or prioritize that doesn’t personally affect me, but that I find distasteful.’ It’s why ‘identity politics’ is always something the other guy has and you don’t.

I agree that in general, classrooms shouldn’t be a place to push a particular political ideology or campaign. However, simply being gay in school isn’t a political campaign. It’s a recognition that a teacher’s classroom is a safe place for gay kids. If that’s political to you, even if the teacher never once mentions a political candidate, you’ve probably got a problem with the existence of the gay kids.

Unlike the choice to support Clinton, Biden or Trump, or supporting the troops or the police, being gay isn’t something you can put on like a T-shirt or leave behind to support a less radical campaign of your choice. People may say now that it’s the more open expressions of LGBT life that bother them, like drag shows, but make no mistake, many of these folks don’t want gay people to even be able to exist in the same country as they do. And they’ve made that very clear.

It was illegal in many parts of the United States to marry as a gay person until 2015 Obergefell v. Hodges ruling, and until 2020 Bostock v. Clayton County, people could be fired for being gay or transgender in more than half of the 50 states in the U.S. It was only 24 years ago that Matthew Shepard was murdered, prompting the signing of the Matthew Shepard and James Byrd, Jr. Hate Crimes Prevention Act, which was signed into law in October 2009. Could you imagine going openly to your prom with a gay date before a few years ago — or even today in many parts of the country?

Even with the victories won in Bostock, a significant ‘ministerial exception’ was carved out of the cases, leading to what the University of Illinois Law Review calls “a struggle to reconcile the doctrines in any principled and consistent way, leading, at best, to vague or imprecise considerations about what qualifies for the ministerial exception.”

In other words, a law that is poorly enforced and often ineffective for the very population it is designed to serve. And religious organizations often used and continue to use the vagueness of the law to turn down well-qualified gay people for employment, even for non-religious jobs, just because they’re gay.

Comparing these types of contested symbols at this point seems almost ridiculous. An official symbol of a regime many around the world would consider oppressive and imperialistic (the American flag) is not only standard issue but welcome and respected in most classrooms, and in many areas students still practice the pledge and salute, despite their right not to do so.

Meanwhile, a symbol saying at best, ‘we welcome your right to be alive and equal’ is considered to be the same as ‘Biden 2020’ or ‘Trump 2020’ and nothing more. Such a rule betrays no understanding of the dynamics or history involved with these issues. At the very least, all three of these types of symbols should be banned under the rule about political symbols.

I’ve had friends tell me kids and parents have complained about pride flags, saying they feel like they need to treat them as though they were the American flag, as if the teacher has required this (they have not). If a classroom has a pride flag or an “everyone is welcome” sign, usually what it means is ‘Everyone is welcome.”

That hardly seems like an incendiary or partisan political statement, unless your political identity is staked on the fact that certain people are very much not welcome. It’s certainly representative of much less war and bloodshed than the American flag or the flag salute, which was largely introduced in schools in the 1890s-WWI era as a way to instill patriotism and nationalism in students during the Spanish American War and World War I.

In fact, the only reason flag salutes are not mandatory in schools today is because of a Supreme Court Case brought in 1940 on behalf of Jehovah’s Witnesses, who protested being forced to salute the flag as a right of religious freedom, and, as a result, were expelled from school.

This might make Christians uncomfortable, but most of our modern First Amendment freedoms are because of a minority religious group (the Jehovah’s Witnesses,) who hold views many disagree with then and now, but consistent with the promise of America, have the freedom to hold them.

Moreover, these practitioners were singled out and persecuted in Hitler’s regime, as were LGBT people. This comparison to Nazi practices made people uncomfortable in the 1940s, which may have led the Supreme Court to take their cases — in all, more than 23 First Amendment Cases were brought to the court by the Jehovah’s Witnesses in the late 1930s and 1940s.

School officials should remember this unflattering history. Forcing people to bow to symbols rarely ends well, and neither does banning books, ideas or stifling freedom of expression. At the very least, apply rules specifically and fairly, rather than trying to ban things based on broad and unenforceable concepts like ‘political’ or ‘obscene,’ which are different depending on each person you speak to.

Perhaps instead they should focus on creating an environment where someday a pride flag may no longer feel necessary, because LGBT students feel welcome and accepted in any school environment.

Right now, that day is yet to come.