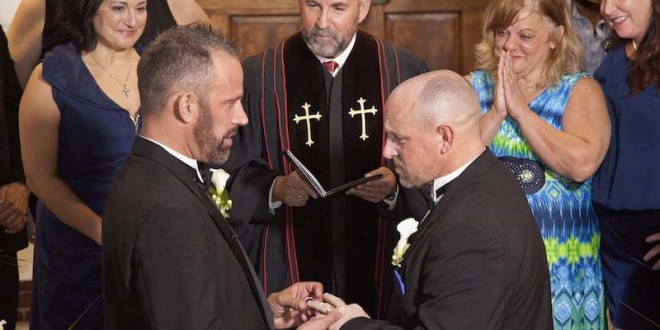 Aaron Huntsman (front L) and William Lee Jones (front R) complete their wedding vows, with Rev. Steve Torrence (C) officiating, on the steps of the Monroe County Courthouse in Key West, Florida, early January 6, 2015. The couple obtained the first same-sex marriage license issued in the Florida Keys. Same-sex marriage licenses were issued in the rest of the state starting just after midnight on Tuesday, when a stay expires on a ruling by U.S. District Judge Robert Hinkle in Tallahassee, who also struck down the ban approved by Florida voters in 2008. The legalization of gay marriage in Florida means about 70 percent of Americans now live in states permitting same-sex marriage, almost double the number a year ago, according to the Human Rights Campaign, a national advocacy group. REUTERS/Carol Tedesco/Florida Keys News Bureau/Handout via Reuters (UNITED STATES -

WASHINGTON (RNS) As the Supreme Court readies to hear a group of cases that could make same-sex marriage legal from coast to coast, support for allowing gays and lesbians to marry is piling in from all directions.

On April 28, the court will hear arguments in four related cases that address whether state bans on gay and lesbian marriages are constitutional. The ruling is expected by late June.

But new opinion polls and friend-of-the-court briefs that were due Friday (March 6) show widespread acceptance of marriage as a right for all.

Climbing public support: The rate of growth for supporting same-sex marriage has risen so rapidly even the director of the national biennial General Social Survey is marveling at the speed of change.

“Most things change slowly. This is one of the most impressive changes we’ve measured,” said Tom Smith of the National Opinion Research Center, based at the University of Chicago, which conducts the GSS.The GSS first asked about legalizing same-sex marriage in 1988, and only 11 percent agreed.

According to results released Thursday, the 2014 survey found 56 percent of Americans overall now support civil marriage for same-sex couples, up from 48 percent in 2012. The numbers bumped up in every age group and political persuasion.

Because nearly three in four adults under age 35 are the most strongly in favor of gay marriage, Smith said there’s likely to be even more movement in this direction in society overall: “They’re the engine moving change.”

Big-name backing: Support from Democrats is not news. But this week dozens of prominent conservatives, including former Republican National Committee Chairman Ken Mehlman and David Koch, one of the deeply conservative billionaire Koch brothers, signed a brief that says “conservative values are consistent with — indeed, are advanced by — affording civil marriage rights to same-sex couples.”

Same-sex marriage is currently legal in 37 states and the District of Columbia but still embroiled in legal battles in Alabama.