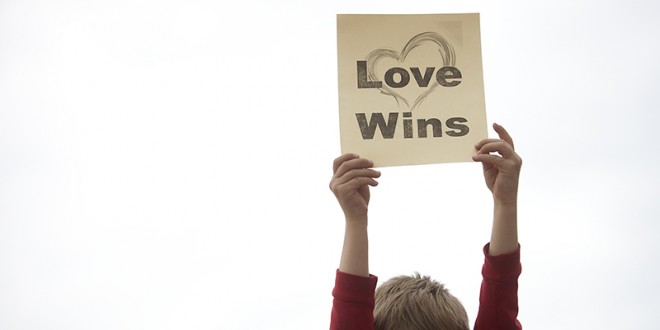 (RNS1-april22) A boy holds up a sign during a rally by gay rights supporters on the steps of the Pennsylvania State Capital after a ruling struck down a ban on same sex marriage in Harrisburg, Pennsylvania, on May 20, 2014. Photo courtesy of REUTERS/Mark Makela

Gay marriage fight centers on what’s best for the kids

WASHINGTON — It is perhaps the most controversial component of the national debate over same-sex marriage: Who should raise children?

The judge who wrote the decision upholding gay-marriage bans in four Midwest states gave at least some same-sex couples a shout-out last fall, even while ruling against them. His ruling is being appealed to the Supreme Court, which will hear oral arguments next Tuesday (April 28).

Judge Jeffrey Sutton’s words have done little to quell the war of statistics and academic studies that has raged for years over the relative child-rearing skills of gay and straight parents.

Dozens of briefs submitted to the court cite scores of scientific studies on the subject. Some show that children raised in same-sex households fare no worse than those raised by mothers and fathers. Others say the differences are stark in areas ranging from emotional development to high school graduation rates and success at work.

The judge who looked most closely at the two sides’ arguments wasn’t Sutton but U.S. District Judge Bernard Friedman, who conducted a two-week trial last year to consider April DeBoer and Jayne Rowse’s lawsuit against Michigan’s gay-marriage ban. He came down firmly on the side of studies showing no difference between gay and heterosexual child-rearing.

Researchers claiming negative outcomes for children of same-sex couples “clearly represent a fringe viewpoint that is rejected by the vast majority of their colleagues across a variety of social science fields,” Friedman wrote.

While rejecting the “fringe” label, some conservatives acknowledge that sufficient research has not been done to show that same-sex parenting harms children’s development. They contend the question remains open to debate.

“The jury is still out,” says Ryan T. Anderson, a Heritage Foundation scholar and one of the nation’s leading opponents of same-sex marriage. “This would be a great reason to tell the Supreme Court, ‘Don’t settle this issue once and for all for all 50 states. Let’s have the laboratories of democracy do a natural experiment.’ ”

The most reliable statistics show that about 210,000 children under age 18 are being raised nationally by more than 122,000 same-sex-couples. Those couples are three times as likely to be raising adopted or foster children: about 58,000 are being raised by about 27,000 gay or lesbian couples.

Though the lawsuits that toppled gay-marriage bans from Alabama to Alaska were filed mostly by adults, judges have paid close attention to the well-being of children, both currently and if their parents eventually were allowed to marry.

“Throughout this battle, judge after judge has talked about children. It has helped bring the reality of this issue into this debate,” says Gabriel Blau, executive director of the Family Equality Council, which advocates for gay and lesbian parents and children. “They get that there are real lives at stake here.”

One prominent appeals court judge — Richard Posner of the U.S. Court of Appeals for the Chicago-based 7th Circuit, a nominee of President Reagan — made children the focus of his decision striking down gay marriage bans in Wisconsin and Indiana.

“To the extent that children are better off in families in which the parents are married, they are better off whether they are raised by their biological parents or by adoptive parents,” Posner wrote last September for a unanimous three-judge panel.

Each of the cases from Michigan, Ohio, Kentucky and Tennessee that are consolidated before the Supreme Court involve gay or lesbian couples raising children. Some are the biological children of one parent. Others were foster children, later adopted, including some with disabilities. Several were born while the lawsuits progressed.

Children’s voices also have been raised in several briefs submitted to the court. One of the most prominent is Kinsey Morrison, a Kentucky resident and freshman at Stanford University whose lesbian parents raised her and two kid sisters.

“I’ve been lucky to have two different parents, two different perspectives. I haven’t missed out at all,” Morrison says, noting her two moms coached her softball team and taught her to drive and fix the car. “Tragically,” she quips, “neither one of them knows how to cook.”

Several briefs on the other side were submitted by children of gay or lesbian parents who regret their situation and oppose same-sex marriage. In most cases, their problems stemmed from earlier heterosexual relationships gone awry.

“Two loving moms, or two dads, can never replace the lost parent,” Heather Barwick wrote the court. “Accepting and promoting same-sex parenting guarantees that a child will miss out on their mother or father.”

As the debate rages, Gary Gates, the nation’s leading researcher on gay and lesbian demographics at UCLA School of Law’s Williams Institute, cites truth on both sides. Although some outcomes for children in gay households may be worse, he says, the sexual orientation of the parents isn’t the root cause.

The median annual household income of same-sex couples raising minor children is more than 10 percent lower than for comparable married heterosexual couples, Gates’ brief to the Supreme Court says. Gay or lesbian couples are twice as likely to be living in poverty.

Moreover, Gates says, studies that show different outcomes for children fail to control for outside factors, such as previous divorces after failed heterosexual marriages.

Prominent studies that claim children of same-sex households suffer compared with those raised by mothers and fathers have been touted by conservatives opposed to gay marriage. They have been subjected to a torrent of criticism from national organizations representing psychologists, sociologists and others.

Studies by Mark Regnerus, associate professor of sociology at the University of Texas, top that list. Twice in 2012, he found that children who reported their mothers or fathers had a same-sex relationship fared worse than children from opposite-sex marriages, in areas ranging from education and employment to sexual promiscuity and arrest records.

His studies and others, including one this year by the Rev. Paul Sullins, an associate sociologist at Catholic University, paint a clear portrait of same-sex households with children, Regnerus wrote in a recent blog post. “We know what that looks like: a clear step down, on average, from households that united children with their own mother and father,” he said.

A brief submitted by the American College of Pediatricians, a conservative group created after the American Academy of Pediatrics supported gay adoptions, lauds studies by Regnerus, Sullins and Douglas Allen, an economics professor at Canada’s Simon Fraser University.

“Children with same-sex parents fare substantially worse — most measures show at least twice the level of distress — than do children with opposite-sex parents on a range of psychological, developmental and emotional outcomes,” the group claims. “The longer social scientists study the question, the more evidence of harm is found.”

Those who defend studies showing no difference between the children of same-sex and opposite-sex parents say nothing could be further from the truth.

The American Psychological Association’s brief points to studies such as one using data from the National Longitudinal Study of Adolescent Health. It found no differences in psychological adjustment, educational outcomes, substance abuse and delinquency between the children of lesbian and heterosexual couples.

“The well-being of children,” the brief argues, “does not depend on the sex or sexual orientation of their parents.”

Jeanne Howard, former director of the Center for Adoption Studies at Illinois State University, says nearly 30 years of research have not revealed substantial differences between the children of gay and heterosexual parents.

What does the research show? “Warm, respectful, nurturing parents have children who fare better than parents who are not,” she says.

Previous Sex outside marriage is sinful
Next The Bible Says: Does Hell Exist?