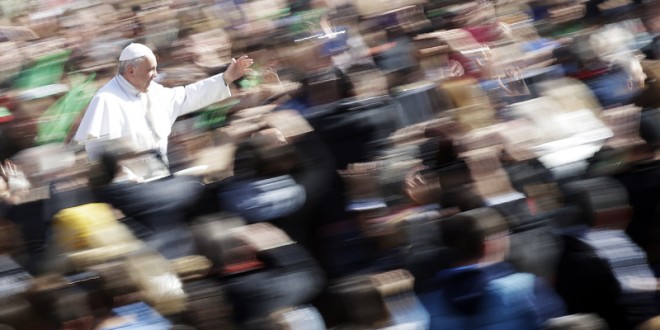 (RNS) When Pope Francis pays a visit to Naples this Saturday (March 21) he will have lunch with some 90 inmates at a local prison, a contingent that will reportedly include 10 from a section reserved for gay and transgendered prisoners, and those infected with the virus that causes AIDS.

The stopover at the Giuseppe Salvia Detention Center in Poggioreale, near Naples, was originally not scheduled to include lunch, according to a report from Tv2000, an Italian television network operated by the country’s Catholic bishops.

But the pope insisted on the meal, which will be prepared by the prisoners, some of whom will come from two other detention centers. The 90 were chosen by lottery from among 1,900 inmates, according to the Vatican Insider website.

Among the many innovations Francis has made since his election two years ago this month has been a new tone and approach to gay and transgender people.

One of his signature phrases, “Who am I to judge?,” came in response to a question about whether a gay man could be a priest. And in late January he met privately in the Vatican with a transgender man from Spain who had written to Francis about the rejection he was experiencing in his home parish.

Francis has made an outreach to detainees a signature part of his ministry to the “marginalized.” On Holy Thursday next month, he will wash the feet of men and women inmates at a facility near Rome, as he did shortly after his election.

The lunch this Saturday will be very simple, even “frugal,” because the pontiff wants to take time to meet each prisoner individually, Anna Maria Esposito, head of a prison ministry, told Vatican Radio.

The prison visit is part of a busy day for the pope in the sprawling Italian city 150 miles south of Rome.

Francis will begin by praying at a sanctuary in Pompeii — a town known for its Marian shrine, as well as a volcano — and he will go on to hold a series of events, including an outdoor Mass and meetings with young people and the sick before returning in the evening to the Vatican.

Previous The Bible Says: Can Women Be Church Leaders?
Next Why Spokane Needs to Attend the Parliament of World’s Religions

This Mormon Loves the Pope - SpokaneFāVS

[…] sometimes marginalized in the Catholic Church and other communities, including divorced people, LGBT individuals, and women who have […]