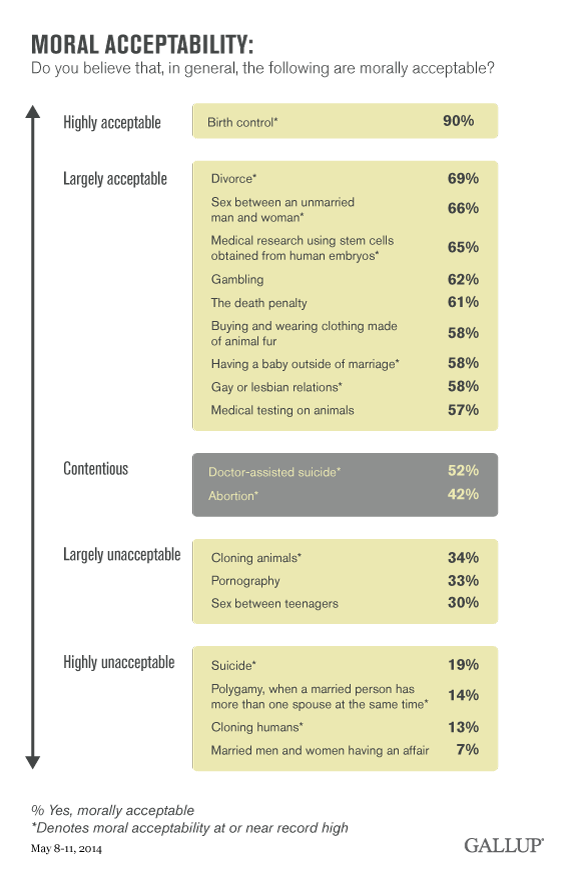 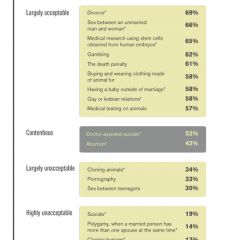 WASHINGTON (RNS) Americans are showing more tolerance for a range of behaviors, with sex between unmarried adults, medical research on stem cells from human embryos, and doctor-assisted suicide all showing record highs and increases in “moral acceptability” from last year.

The Gallup poll’s annual “moral acceptability” scale has been conducted since 2001 and charts shifting cultural attitudes on a number of hot-button social issues. In the 2014 list released Friday (May 30), Gallup researchers said 12 of the 19 categories reflected “levels of moral acceptance that are as high or higher than in the past.”

“Americans largely agree about the morality of several issues,” Gallup researchers said. “Most say birth control is acceptable but that extramarital affairs are wrong. However, other issues show clear, substantial divides. These differences are largely explained by party identification, but previous research has shown that age also plays a factor.”

Three issues — sex between an unmarried man and woman, medical research on embryonic stem cells and doctor-assisted suicide — showed a slight increase in acceptability from 2013. Most of the other issues were mostly unchanged.

Gallup grouped the 19 issues into five categories, including:

Against a backdrop of sweeping legal victories in favor of same-sex marriage, the 58 percent of Americans who rated gay and lesbians relations as morally acceptable was mostly unchanged fromlast year’s rating of 59 percent. Last year’s figure, however, represented a 19-point shift since 2001, the largest change for any issue on Gallup’s list, which it started at that time.

The 2014 figures were based on 1,028 phone interviews with U.S. adults in all 50 states and the District of Columbia. The poll has a margin of error of plus or minus 4 percentage points.

Previous What if Mars Hill takes over this building?
Next SFCC students from Tibet working to become teachers at Tibetan orphanage