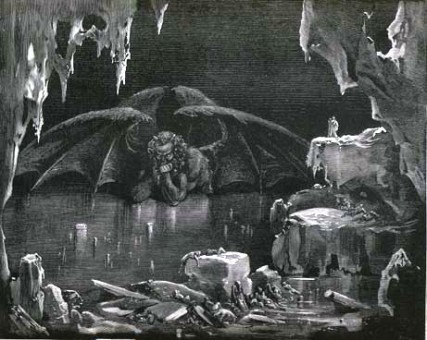 The ninth circle of hell, from Dante’s “Inferno.” By. Gustav Dore, via Wikipedia Commons

Frozen or flaming: What’s the better depiction of hell?

In summer, it’s “hotter than hell.” In winter, “hell has frozen over.”

A couple years ago, The Economist took a close look at the Western world’s perceptions of hell and where they came from in terms of theology, history and literature. Some see hell as “a medieval relic.” In contemporary culture, “it is merely a bark, not a place.” And for others, it exists “not just as a concept, but as a place on the map.” (As a religion reporter, and someone who loves literature, I recommend the article – you can read it here.)

BBC has a “ten-point tour of the underworld,” taking its hits from the likes of writers from Dante to Dan Brown. The writer of the piece surmises that hell is conical, diverse, and underground – maybe.

And, in similar fashion, The Guardian has a list of the 10 best visions of hell in literature. From Virgil, we read, “From hence are heard the groans of ghosts, the pains / Of sounding lashes and of dragging chains.” John Milton tells us the place is “A dungeon horrible, on all sides round / As one great furnace flamed; yet from those flames / No light; but rather darkness visible…” Here’s James Joyce on the subject: “Imagine some foul and putrid corpse that has lain rotting and decomposing in the grave, a jelly-like mass of liquid corruption.”

Speaking strictly in literary terms, I think back to my college English classes. I think of the ninth circle of Dante’s hell, where the likes of Cain and Judas are frozen in a lake of ice. Then, I think of Jonathan Edwards’ “Sinners in the Hands of an Angry God,” with all its mention of hell fire:  ”the pit is prepared, the fire is made ready, the furnace is now hot, ready to receive them, the flames do now rage and glow.” (After this polar vortex, or whatever we’re calling this recent bitter weather, I think the lake of ice sounds like quite a punishment.)

Regardless of whether you believe in hell, what’s the better depiction?